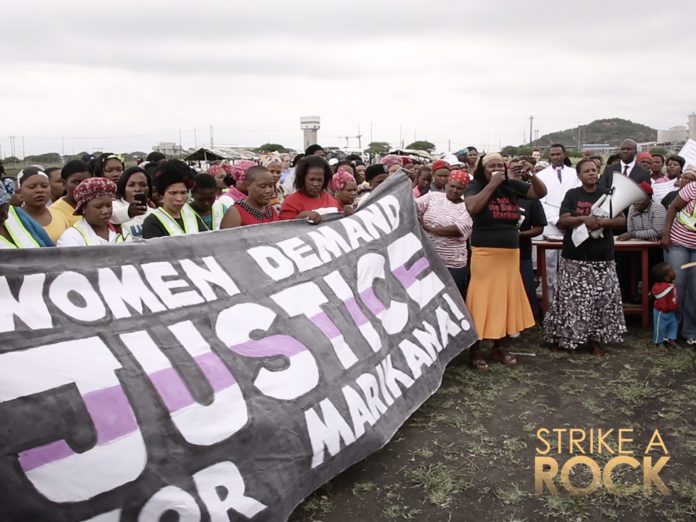 The 12th annual South African Film and Television Awards (SAFTAs) will take place on 22 and 24 March 2018 at Sun City Resort in the North West Province. Managed under the custodianship of the National Film and Video Foundation (NFVF) – an agency of the Department of Arts and Culture – the SAFTAs committee consists of the SABC, DStv, M-Net, e.tv, StarSat, the Cultural and Creative Industries Federation of South Africa (CCIFSA) and the South African Screen Federation (SASFED).

What inspired you to make this documentary?

The realities of the devastation of the Marikana massacre that took place on 16 August 2012 is widely known and has been criticised globally, including in the award-winning film Miners Shot Down, produced by Uhuru Productions, the co-producers of Strike a Rock. But there are voices that have yet to be heard. Voices from the strong women leaders and the community that surrounds the mine have seemingly been erased from the narrative. Despite the international attention, inquiry and mass-activism that followed the massacre, living conditions for the Marikana community have worsened. There has been no accountability.

This is what drew me so powerfully to the story of Thumeka and Primrose, two grandmothers who were compelled by the tragedy they witnessed to take on leadership roles, exercising their agency and power. They force us to recognise that the story of Marikana is not yet over.

My aim was to weave together the perspectives of the women using a sensitive, unobtrusive and intimate camera. The film takes the viewer on a journey through trauma, history, loss, memory, friendship, and the fear of being further forgotten as Thumeka and Primrose survive each day. At the same time we are confronted with a very real obstruction of justice and lack of accountability on the side of Lonmin, who seemingly shirk their legal obligations to the community, and the South African government, who neglect to ensure that the required socio-economic development takes place. In this context, the personal becomes the political and that is where the impact of the film lies.

After over four years of creating this documentary the journey is only really beginning now, as we use the film to build on a movement focusing on extractive practices and their socio-economic and environmental impacts in South Africa and Southern Africa regionally. We hope the film will be a powerful tool in Sikhala Sonke’s struggle against poverty, while inspiring other women across the world who are taking a stand against oppression.

What do you attribute its success to?

I was fortunate enough to meet the most incredible, powerful women who are often leading the change and on the ground activism in Marikana. Women who were hardly known, but who I believe should be celebrated and recognised for their bravery and commitment to the fight for justice and accountability.

The film focusses on the activism of the Sikhala Sonke women’s organisation in Marikana and their leaders Primrose Sonti and Thumeka Magwangqana. I made a very important creative decision to keep the film incredibly intimate, and focus on telling the story through the women’s voices from the inside, rather than through external voices that have already shaped the discourse of the space. Right from the beginning the film has been a collaborative process, it was the most important thing.

Thumeka, Primrose and Sikhala Sonke knew that we had the same intention with the story and what we wanted it to do. That coupled with a very important creative decision to immerse myself with the women in their homes for four years helped us develop a very strong relationship, trust and mutual respect that extends way beyond the film. The film is a mouthpiece for their voices, as well as aims to continue the work they are already doing on public platform in bringing awareness and attention to their plights.

What will winning the 2018 SAFTA mean to you and the Strike a Rock cast and crew?

As a female filmmaker with my first documentary feature film, Strike a Rock, I am beyond overjoyed that we have been nominated in two categories at the SAFTAs. To win a SAFTA would be a dream come true as it is especially important to me, that as South Africans, we recognise narratives that show empowered, empowering and inspiring women, as well as celebrate the women working behind the lens. The people in my film are living examples of how women are at the forefront of change and of how vital it is that history is inclusive of these voices. The devastating effects of the Marikana massacre are still felt today by the people who were left behind and it’s my hope that the film has and will continue to make an impact in this community.

Watch the Strike a Rock trailer.