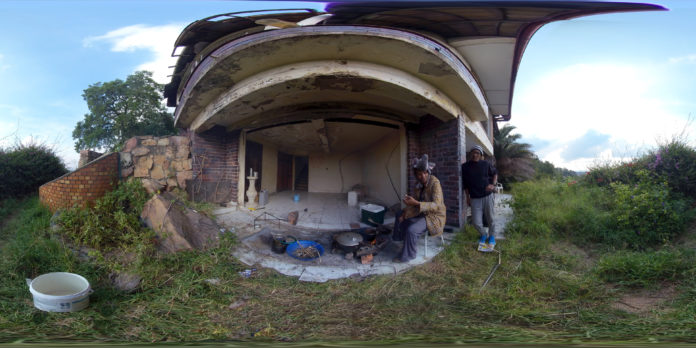 It’s not a secret that the issue of land redistribution remains a contentious and highly emotional subject in post-Apartheid South Africa.

As a result, thousands of homeless South African people of colour are illegally occupying empty privately-owned homes and developments.

The virtual reality (VR) film Azibuye – The Occupation follows the journey of two homeless people, Masello and Evan, in 360° view, as they take up residence in a vacant home in an affluent area in Johannesburg. As luck would have it, the pair discovers a crumbling mansion that has been vacant for nearly 20 years. They settle into their new home and proclaim their illegal occupation to be an artistic and political act in retaliation to the ongoing land redistribution issue.

The themes explored in the film include colonialism, dispossession, decolonisation and the role that art plays in addressing these issues.

The virtual reality film also delves into the backstories of the two occupants, revealing Masello as a well-known actress and Evan as a trade unionist. “To me, they represent the long history of activism and self-organisation in South Africa, as well as protest art – as they also view their occupation as an installation of sorts. It’s hard to mention the underlying issues in the film without getting into spoilers, but I hope the film challenges viewers’ assumptions about the issues and the characters,” says Valley.

Valley is an associate lecturer at the University of the Witwatersrand, an editorial board member at Africa is a Country and an Atlantic Fellow for Racial Equity 2019. He has been a commissioning editor for the South Africa Broadcasting Company (SABC) and has directed several pieces for Al Jazeera.

Valley’s documentary style is a mix of music, art and performance that tells compelling stories about real people with a social justice focus. “Trying to correct some sense of social injustice or misunderstood story very much informs the subjects I choose. My work tends to slant towards a racial equity lens, so the subjects I cover fall very much underneath this banner,” he explains.

It was only in 2017, while watching VR films at the Encounters South African International Documentary Festival, that Valley imagined the extensive immersive possibilities that VR could add to his own documentary filmmaking career.

“VR is still new here, and that’s a good thing. There aren’t many ‘experts’ and it’s a great time for experimentation and play. I am particularly interested in the possibilities that these emerging technologies can offer to black filmmakers,” he shares.

The search for more immersive experiences led Valley to Electric South, a Pan-African immersive media production studio. The Cape Town-based studio provides mentorship, production services, funding and exhibitions for a network of artists across Africa to explore their subject-matter through immersive, interactive stories including virtual and augmented reality.

A sponsorship agreement between Electric South and Facebook/Oculus saw Valley and other participants receive headsets and guidance in order to undertake their VR/AR projects.

Cultural producer at Electric South, Kirstin Erasmus comments: “Immersive storytelling on the continent is climbing at a steady pace. Globally it is still in its infancy but, as knowledge about the industry grows, equipment and resources become more readily available and the opportunities present themselves. Those in the know are really excited about the possibilities of immersive storytelling, as it gives us as Africans the rare opportunity to curate and own our own stories.”

Azibuye was shot in April 2019 on the Insta360 Pro camera, which films well in 8K and 3D; Zoom recorders were used for sound.

“I wanted the viewer to feel like they were participants in the occupation. I was going for a very naturalistic documentary feeling and static 360 shots,” informs Valley. “I wanted to create a contemplative and reflective mood as the characters are talking about some complex socio-historical issues such as colonialism, laws of dispossession, Apartheid, etc. – and so the long, static takes in time-ravaged spaces helped with that.”

“Because we were in one location, the shoot was smooth sailing. In terms of the storytelling, we wanted to interview the owner of the house, which was challenging for a number of reasons – but we managed to get the interview in the end!” exclaims Valley.

The film was produced by Caitlin Robinson under the direction of Valley, with editing done by Stephen Abbott. Post-production duties were handled by Yoav Dagan and Samukelo Mahlalela.

Since its completion, Azibuye has garnered much international attention and became the first South African film to be selected as part of Sundance Film Festival’s New Frontier Exhibitions programme.

“It’s a huge honour and I’m incredibly humbled by being included in Sundance 2020,” says Valley. “Making films is incredibly hard (as any filmmaker reading this will attest to), and so these kinds of acknowledgements are great affirmations that help to keep us going,” he concludes.