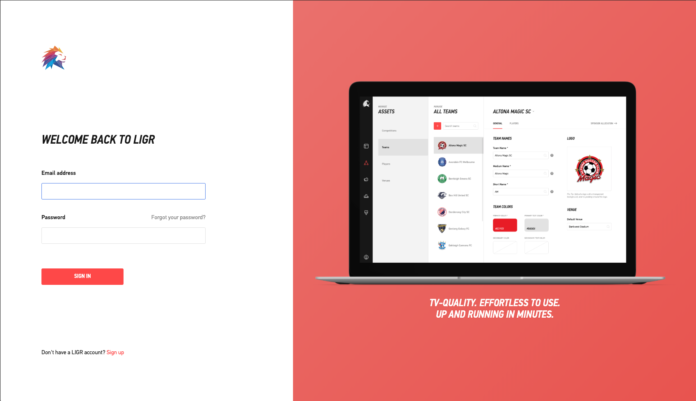 In a changing broadcast environment, where streaming of content directly to the viewer is becoming the new norm, the need for quality but cost-effective on-air graphics for live streams has given rise to a new, out-of-the-box solution that matches TV-level production at a fraction of the price. It gets even better because the new workﬂow is unlike anything that has ever been seen before: it’s a platform that not only offers TV-quality results, but it is cost effective and has no expensive hardware, software or staff. It is, furthermore, a cinch to use on a self-service platform that anyone, yes anyone, can manipulate to manage all on-air graphic aspects of their broadcasts and live streams.

There are two parts to a sports game on TV. There’s the actual play and then there’s the stats and graphics that enrich the action. A big part of creating professional and engaging sports broadcasts is live on-air graphics – they tell a story and show relevant information, from game scores to player and team stats. Graphics also display in-game advertisements from sponsors who support the club’s brands, broadcasters and leagues, which seek to target highly-defined sports audiences.

For smaller teams, clubs, and schools, producing sophisticated graphics — live and in-game — is prohibitive. Hardware is expensive; software, difficult to master. Skilled staff is required to operate the consoles, and designers are needed to create the graphics. Matching the TV-quality level of production traditionally costs tens of thousands of dollars, and that’s per game.

As live streaming has become more popular and affordable, the need to produce quality on-air graphics on a professional level has become a necessity, and all too often smaller sporting organisations and production companies are hard-pressed to compete with the major broadcasters, as traditional graphic and titling solutions are unrealistically expensive.

However, a few years back a group of Australia-based innovators formed a company called Live Graphic Systems. They put their heads together and came up with a new breed of automated graphics and broadcast management software that offered TV-quality sports graphics but with no need for hardware, designers, skilled graphics operators or developers. The system is called LIGR.

Since its inception, LIGR has produced graphics for over 10,000 sports games across the globe with over 1,000 sponsor ad-sets uploaded onto their platform. To date, it’s estimated that LIGR has saved over 100,000 hours of graphics operation, design and development – which equates to more than $20 million saved. LIGR provides out-of-the-box, ESPN-quality graphics templates that let you produce a professional live stream in a few simple steps. Just login, select your sport, and choose your graphics theme. Then upload your team, player and sponsor assets one by one (or upload your fixtures and squads in one hit), and watch as professional automated graphics animate over your live streams.

The system incorporates a sponsorship management tool that incorporates brand and sponsor assets into the live stream graphics and has a sponsor reporting dashboard to provide metrics and insights about when and how the sponsors information was displayed during the broadcast. LIGR provides a complete asset management system (AMS), where the user can upload their assets, which are mapped to their teams and are then assigned to the schedule of games. Each league has its own assets, such as logos, watermarks, naming conventions and colours, and the user sets all of this up pre-season or pre-game. When games are scheduled in the LIGR scheduler, all assets will map to each competition and each home and away team automatically.

In April this year, LIGR are set to release the LIGR Deck system – which automatically creates an entire game’s live graphics by simply live scoring the game. The users can utilise the LIGR Live Scoring App in a smart phone, or by connecting to the official scoring system or an external live score data source such as Stats Perform, Genius Sports, Sport Radar – either way, this completely removes any manual graphics operation.

Users can upload and manage the assets they need in an easy-to-use dashboard and the graphics will animate on- and off-screen—automatically, and based on the live match data. Last year, LIGRA were set a challenge by Cricket Australia to produce professional and data integrated graphics for over 120 live stream games across the season. The system had to integrate with Cricket Australia’s OptaPro system (which provides analytical data) in real time while connecting brands to specific triggered events in-game. The system had to be able to run graphics in a combination of auto and manual mode, with graphics to be overlaid off-site in a cloud-based master control room (MCR) with direction fed by an on-site producer to the off-site graphics operator. LIGR worked on a unique workflow that combined traditional workflows with automated and remote workflows for the local JLT Cup, The Woman’s Big Bash League, as well as international non-televised live streams.

Interest in live graphic systems technology is gaining momentum, and not only in the streaming environment – it is also attracting attention from mainstream broadcasters. LIGR really is the easiest way to deliver a consistent and professional level of live streaming quality graphic content, for all games, across all age groups, to all fans – only without the hard work.