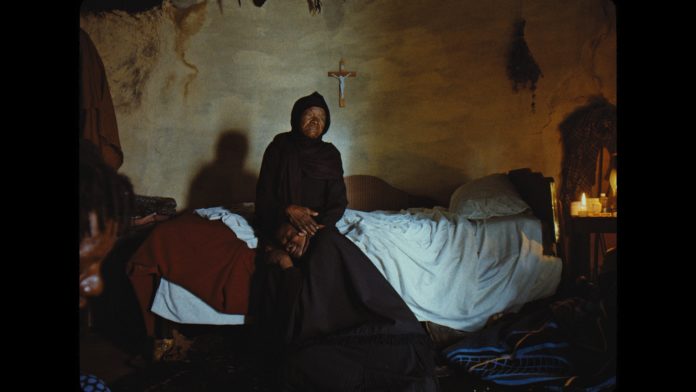 Lemohang Jeremiah Mosese is a self-taught filmmaker and visual artist from Lesotho, now based in Berlin. His film Mother, I am Suffocating. This is My Last Film About You, was selected for Final Cut in Venice in 2018, where it won six awards. The film premiered in the Berlinale Forum in 2019.

Mosese was one of three filmmakers selected for Biennale College Cinema with his feature film This Is Not A Burial, It’s A Resurrection. The film had its international premiere at the 2020 Sundance Film Festival, where it won the Special Jury Award for Visionary Filmmaking in the World Cinema Dramatic competition. Global sales rights have now been picked up by Memento Film’s cinema arthouse label, Artscope.

Set amongst the mountains of land-locked Lesotho, This Is Not A Burial, It’s A Resurrection follows an 80-year-old widow as she winds up her earthly affairs, makes arrangements for her burial and prepares to die. But when her village is threatened with forced resettlement due to the construction of a reservoir, she finds a new will to live and ignites a collective spirit of defiance within her community. In the final dramatic moments of her life, Mantoa’s legend is forged and made eternal.

Congratulations on This is Not A Burial, It’s A Resurrection premiering and winning at Sundance this year! Did you expect to be getting such recognition for the film?

I was definitely not expecting to get such recognition in general! You do this work, and you just hope that it resonates with people. My work is very personal, it’s all reactionary, it’s not for everyone. It’s kind of a film I would personally seek out in the festival. We had only six months to create this film from scratch. There are many things I wish I would have done differently, but I have come to learn to let go. It’s not mine anymore, it has its own life.

Why is this film so personal to you?

I drew on real-life events for the film, which is set in my native home, Lesotho. Lesotho is a tiny country completely enveloped by South Africa. Its behemoth mountain ranges make up nearly three-quarters of its terrain and these are responsible for the abundance of water in the country, believed to be among the highest quality in the world. Lesotho annually exports an estimated 780 million cubic metres of water to South Africa; this marks Africa’s largest water transfer scheme in history.

As more and more reservoirs are built, thousands of highland villagers are forcibly removed from their land and are relocated to urban living environments, where they not only lose their livestock, crops and way of life, but also their individual and collective identity. Most liken the process of displacement to a death. More and more forests, villages and family relics are being erased in the name of progress. Destroyed and forgotten in a soulless march towards futurity. I am personally not for or against progress. I am more interested in interrogating the psychological, spiritual and social elements that attend it.

When I was a child, my family was evicted from our home. My grandmother’s village is undergoing forced resettlement right now. I still know every texture of her house’s walls, its thatched roof, the smell of oak trees after rain, the stone kraal. Soon this will be razed and flooded and water will be channelled into the heart of South Africa. Let’s just say in every scene and every character there is me; my conflicts, my struggles with faith, my fears, my hopes and dreams.

Can you tell us more about the filmmaking process?

The filmmaking process was definitely challenging. As I said, we had to complete the film in just six months so we had a very packed shooting schedule. The film was shot on location in the remote mountains of Lesotho, where running water and electricity are a scarcity. Equipment, vehicles, crew and other resources were brought into the country from South

Africa. The tiny crew of just fifteen people endured extreme weather conditions while shooting in areas with no road access. Equipment and cast were often transported on horseback and on mules.

Apart from the leads, the cast is made up almost entirely of actual residents from the village where photography took place. It’s really interesting because they knew nothing about cinema: they had never seen something like this in their village before, so they had no preconceived ideas about acting. Everything was really natural and we made sure the set design was always as minimalistic as possible. I didn’t want anyone to feel like they were being watched or under scrutiny.

I come from a visual world. As much as I love language, visuals take precedence in my work. I knew the texture, I knew the composition, pace, tone and the feel I wanted. And I tried to find a playful space on set, to stumble upon things. Pierre de Villiers, my DoP, and I have a synchronised love and passion for beauty. His way of seeing light is just amazing. He comes from the commercial world and it was his first film – it’s incredible. I also trusted him with the choice of camera we used, which was the Sony Venice. It served us best in low light conditions.

What was the decision-making behind editing the film yourself?

As a director, I’m obsessed with how to tell the story through the edit of a film. Editing is the same as writing, it’s so important to really bring all your ideas to the screen. But, of course, sometimes it’s nice to bring someone external in to edit your film – they’ll bring a new perspective to it.

We had some very poignant scenes and my aim was to make sure the edit was paced to reflect those scenes. It was built around them and the framing, so everything was as visual and slow as possible, then got faster around the tension.

What software was used to edit the film and what was the editing process like?

I now use DaVinci Resolve to edit and grade all of my films. I first saw DaVinci Resolve as an NLE solution when Apple brought out Final Cut X. I’d been a Final Cut user but I just didn’t love their redesign, it made everything harder for me. I’m not even a purist! But the UI just didn’t feel very playful to me anymore. I stopped editing completely when they introduced it. Then I bought a Blackmagic camera – one of the old ones – and it came with Resolve. I fell in love with it! The UI is a whole other world; it’s aesthetically pleasing and makes so much sense to me creatively.

It was a tricky process as we were high up in the mountains and it was really remote. My assistant and I acquired a generator for power and set up a temporary edit suite on location using quad core Mac Pros. It was here that we transcoded all of the rushes and assembled a rough cut. The edit was then finalised at Uhuru Productions in Cape Town. The grade was delivered by colourist Nic Apostoli, at nearby Comfort and Fame Studios.

Can you tell us more about the grading process?

Basically, I wanted a 16mm look. I love that look, and I wanted this film to look like this vintage piece that survived, not a new feature. What I love about DaVinci is you can combine both scanned film and digital, and you won’t be able to see the difference. With my last film, Mother, I used 8mm and integrated that perfectly into Resolve. With this film, I wanted to turn it on its head and do a film emulation look. I basically use LUTs, and play with 16 and 35mm emulation LUTs, and work with colourists to build on them. I always play around, there’s no strict template.

What advice would you give to up-and-coming filmmakers?

Keep making films, fail, and succeed. We are so privileged right now to be in a time when you can literally make films with anything. There are cameras all over the place and software programs like Resolve that let you do all of the post-production in one place. All the information is out there, you just need to go and grab it.