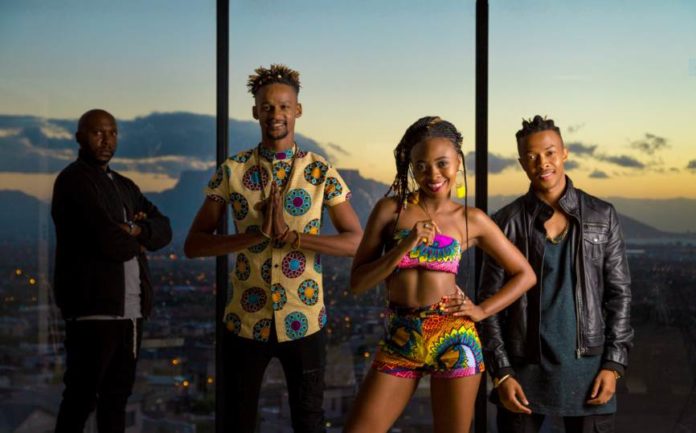 The local music industry is often a harsh, cutthroat world of lies, and heartbreak, where people go to extremes to make it. But exactly how far would you go, or what would you put a loved one through to achieve success? That is the central question Mzansi Magic’s new drama, Ingoma explores.

Ingoma, which airs on 9 April, follows the story of three aspiring artists from the Eastern Cape town of Alice: Sino (Anita Sibozo), Ezekiel (Ayanda Makayi) and Angel (Oros Mampofu). Lured to Cape Town’s big lights and fast life by businessman and record label owner Leo Black (Buyile Dladla), the very naive trio are soon introduced to a life of glamour, wealth and extravagance, with the promise of breaking it in the industry, through Black’s Platinum Record label. But all’s not what it seems, and it’s soon revealed that Leo Black’s intentions are not as savoury as what the group were first led to believe.

The move to Cape Town is a make-or-break opportunity for the story’s main character Sino, who has the hopes and survival of her entire family back in Alice dependant on her success, but she may have bitten off far more than she’s ready for. Sino and her band’s world quickly unravels when a sinister deal is struck between one of the trio and Leo Black.

M-Net’s director of Local Entertainment Channels, Reneilwe Sema commented on the new show, “Ingoma has all the essential trademarks of a brilliant drama: a strong female protagonist with an unwavering will to succeed, an enthralling world in which the story is set, and what at first seems to be a malicious villain. The plot soon provides a massive twist which will leave viewers questioning whose corner they’re really in.”

Sinovuyo ‘Sino’ Mdledle: A beautiful, lost queen, gifted but afraid of her full potential. This self-sacrificing young talent has the hopes of her family riding on her success in the big city.

Ezekiel ‘Ezee’ Biko: Sino’s boyfriend, Ezee is an imaginative and thoughtful poet with a wealth of ideas. He is hard-working, generous and deeply loyal.

Buntu ‘Angel’ Mdlele: Angel is a charming, small-time hustler with his finger on the pulse. He is impulsive, impressionable and optimistic to a fault. Sino’s brother and Ezekiel’s best friend.

Leo Black: Leo is a charming and charismatic businessman and record label owner, but all is not what they seem when the group gets to know the ‘real’ Leo after moving into his Cape Town mansion.

Bongi: Matsepho Sekgopi plays Sino’s younger sister Bongi, who is jealous of Sino’s looks and popularity. Bongi wants to be the centre of attention for once, and this is a catalyst for drama.

Mam’ B: The orderly matron played by Peggy Tunyiswa. Religious and motherly, she is the hardworking single parent who will do anything to see her son Ezekiel succeed.

Zola Mabaso: Sive Matiswane portrays a big friendly giant who’s not afraid to throw his weight around.  Zola hopes to ultimately be a lawyer and maintain peace among the people he loves.

Will the group survive the betrayal and treachery? All will be revealed in season one of Ingoma, starting on Mzansi Magic (DStv channel 161) on Monday, 9 April at 20h00.