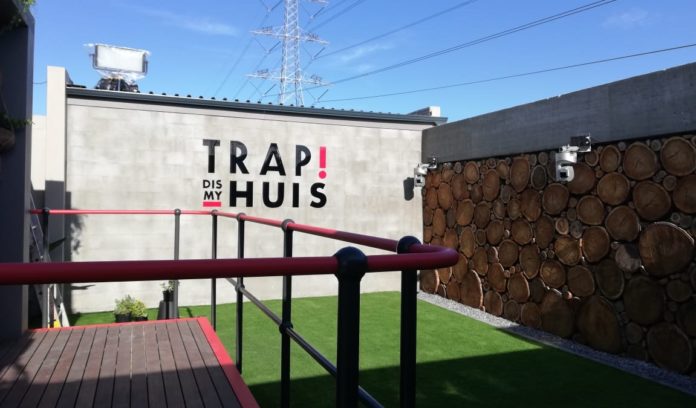 Currently screening on Afrikaans lifestyle channel VIA (DStv 147), new South African TV show Trap! Dis My Huis – co-presented by Amalia Uys and Zoë Brown – is based on the hit international Fremantle television format titled Get The F*CK Out Of My House.

Produced by Cape Town-based production house Afrokaans Film & Television, Trap! Dis My Huis sees 50 strangers living together in a two-bedroom house – equipped with supplies for just two people – for a chance to win R1 million. “The original format caters for 100 people in a four-bedroom house over 30 days or longer,” says Afrokaans producer and founding partner Handrie Basson, “but we had to scale down the format for effective production budget control and compelling storytelling. The VIA version is for 50 people in a two-bedroom house for 18 days.”

With cameras recording their every move 24/7, the housemates must spend three weeks together in the two-bedroom house without leaving. If a housemate wishes to leave the house, they are free to do so, but this means that they are also choosing to leave the competition. Contestants are also regularly voted out of the house by their fellow housemates.

The casting team selected potential housemates based on their short video and questionnaire submissions that were submitted via the online audition platform, Short Audition. “Our casting team then sorted and shortlisted candidates, and did follow-up interviews to select a final cast of 50,” says Basson.

The production crew had their work cut out for them, tracking the various subjects 24 hours a day, for the full 18 days. Working with a large number of contestants, cooped up in a confined space, brings about its own set of unique challenges. And the fact that contestants could leave the house voluntarily at any given moment meant that the crew had to be prepared for a walk-out at any time of day. “An amazing part of the production was to monitor 50 individual audio tracks at all times and making sure that the individual microphone packs were always functioning and powered up. Keeping on top of all the story developments in a house with 50 contestants, meant that our content producers – in fact, the entire control room – had to be glued to the camera monitors constantly to ensure that we are abreast of all conversations, emotions and strategies,” comments Basson. “Designing and setting up the episodic challenges had to be of such a nature that we could continue filming non-stop – without having to break for set-ups and striking of challenge builds and props.”

These restrictions pushed the Afrokaans team to think outside of the box in order to create feasible yet compelling games and challenges for the contestants. “It was an intensely focused production across the board and our crew managed to pull it off spectacularly,” says Basson.

Great entertainment for viewers and guaranteed ratings for broadcasters

The reality TV show has previously had successful editions in the Netherlands, Germany and Brazil. Basson says that the format first caught his attention a few years ago at MIPTV: “After attending MIPTV in Cannes, France a few years back, we spotted the Fremantle format, called Get The F*CK Out Of My House, creating great buzz at the market and we were adamant about bringing it to South Africa. Afrokaans negotiated the rights with Fremantle and found a broadcast partner in VIA to bring this exciting format to South African audiences.”

Afrokaans specialises in unscripted formats, both internationally acquired and original, for South African broadcasters and content platforms. The company also produces lifestyle series and branded content, as well as productions in the scripted genre. Some of their recent projects include Survivor SA (international format) and The Scene (original format) for M-Net; Hoor My Sien My Soen My (international format) for kykNET; Style Squad (original branded content format) for Mzansi Magic; as well as In Ons Midde, Mooi, Dit Proe Soos Huis and Die Kliek (all original formats) for VIA.

Localised international formats are hugely popular in the South African television market – think Survivor, Come Dine With Me, The Bachelor, Masterchef and Dinner Date, to name a few – but while producing home-grown versions of these formats guarantees reward, executing these productions effectively for the local market can be challenging.

“However, South Africans are creative, resourceful and innovative when working around restrictions and smaller budgets. The pay-off is huge when it is done authentically and professionally as our local versions of international formats provide great entertainment for viewers and guaranteed ratings for broadcasters,” he adds.

Afrokaans engaged with Visual Impact SA to provide their trusted turnkey technical support on this format execution. “A producer is only as good as their suppliers and crew,” says Darren Lindsay, supervising producer at Afrokaans. According to Stefan Nell – digital imaging HOD at Visual Impact – this was no easy feat. “The concept of the show is fantastic and I knew that this was a project that would be a huge technical challenge as well as a lot of hard work to deliver a high-quality workflow and ensure that Afrokaans had a top class show to deliver to VIA.”

Once a location had been confirmed, Nell went on a technical recce with Afrokaans supervising producer, Darren Lindsay, and the two immediately realised that the way the technical was executed on the Dutch version of the show would not work for Trap! Dis My Huis. “The Dutch had a lot of space and we did not. The location was a two-bedroom, two-bathroom tiny show house for a complex development in Kuils Rivier,” explains Nell. “There were 50 people that were going to have to inhabit the limited space. It did not take us long to realise that we needed a far different approach in accomplishing the technical requirements of the South African version of the show.”

Around the same time, Visual Impact had acquired a large number of PTZOptics hot head cameras for another format show and the decision was made to use 20 of those on Trap! Dis My Huis. The use of the hot heads combined with two ENG-operated cameras would form the basis of the content acquisition workflow – successfully capturing the action without compromising the integrity of the show format.

“We also combined the PTZOptics cameras with four Canon XU81 cameras for the exterior of the house, as Canons are water- and weatherproof. For the ENG cameras, we decided to use the super reliable work horse that is the Sony PMW 400s, which have been a staple on most of the reality shows that Visual Impact has serviced,” Nell adds.

Determining how best to tackle lighting for the show was just as challenging for Nell and his team, until they settled on the Parvo LED tubes, which are RGBW and can be controlled via Wi-Fi. “These tubes turned out to be the perfect choice as their form factor is not much more than a regular fluorescent tube minus the actual lighting fixture,” Nell explains. “This enabled us to control not only the colour temperature of the lights to match the ambient light spilling in from outside, but also the intensity during the different phases of a day.”

The Parvo LED tubes also allowed the team to set the time of day in the psyche of the contestants by changing from daylight to tungsten in the evening, and then dropping the intensity to 1% on the LEDs at bedtime. “This was not enough light to bother the contestants but enough for the PTZ optics hot heads to expose without too much signal noise. The exterior lighting was provided by our trusty Velvet 2 x 1 LED panels as they are water- and weatherproof and emit the most gorgeous soft light,” adds Nell.

According to Nell, rigging the show was “a laborious process as the hot heads would always be in shot and, as such, all cabling would have to run super neatly and be glued into place.” Nevertheless, Visual Impact’s top technicians Roedolph Louw, Thomas van Greuning and Mcini Jarvani, assisted by the company’s newest team member Sam Maritz and two interns from the Visuals Academy, Siyabulela Mvulana and Giovanni Campher, got the rigging done in just one week. As space was seriously limited in the ceiling cavity the team had to “fish cables into the roof with a PVC pipe and a hook to reach into the corners of the house,” says Nell.

The control room for Trap! Dis My Huis was set up in the double garage of the house, which was impressively converted into a cutting-edge Master Control Room (MCR). The MCR was kitted out with a Blackmagic Design 4K ATEM for Afrokaans director, Mareli Olivier, to do the vision controlling as the workflow required that up to eight streams were captured at any time. “These streams were being recorded onto the tried and trusted PIX 270i recorders from Sound Devices. Using these recorders allowed us to make use of the Dante system by integration with a system provided by Stratosphere Sound, whereby all audio tracks are imbedded into all the video tracks,” says Nell.

The Visual Impact team made use of three different controllers for PTZ control – a Vaddio precision camera controller for the Canons; and the pro controllers from PTZOptics for the hot heads. “This enabled us to pre-program camera positions instead of relying on a joystick for control,” Nell explains. “This proved to be the best way to run a show where we had four different operators running various shifts, but having to maintain the same shot set ups for presenter positions, etc.

“I must admit that I was pleasantly surprised with the results obtained for Trap! Dis My Huis. It was a fantastic format to work on and the content that was created is absolute gold,” says Nell. “Visual Impact is proud to say that we delivered a great technical setup and workflow to our client Afrokaans Film & Television and they in turn delivered a gem of a show to VIA,” he concludes.

Trap! Dis My Huis premiered on 15 January 2020 on VIA (DStv 147), in a prime-time slot, exceeding channel ratings expectations and creating massive buzz on social media nationally.

“We’re ecstatic about the great reception Trap! Dis My Huis has been met with. The first four episodes performed consistently strong, rating well above the benchmark for its prime-time timeslot. In fact, ratings for the show have been climbing week on week,” comments Charles Povey, VIA commissioning editor.

“This is due, in no small part, to the talented team at Afrokaans who were brave enough to take on this challenging format. What’s more, Trap! Dis My Huis has proven to be a major source of talkability – a dream for any broadcaster – with VIA’s social media burning up with comments from viewers. As a channel, we’re proud to share this excitingly different content with DStv viewers.”