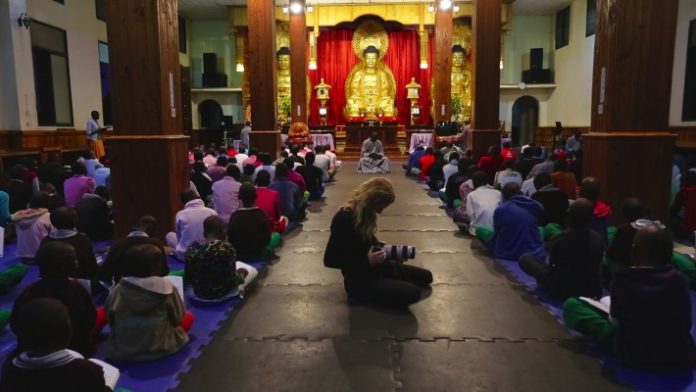 Set in a Chinese Buddhist orphanage in Malawi – against the backdrop of China’s increasing influence on the African continent – Buddha in Africa documents Malawian teenager Enock Alu’s journey and the inner battle he faces as he is torn between the contrasting worlds of his traditional African culture and the Buddhist value system that he was raised within.

Through Enock’s journey and the orphanage he calls home, the film provides a unique perspective on Chinese “soft power” in Africa today. “I was actually living in Malawi when I first came across this story of the Chinese Buddhist orphanage. I had been working as a freelance video journalist producing video features for Reuters Pan-African magazine programme Africa Journal and this was the last story I did before returning to South Africa,” comments director Nicole Schafer. “I was working on a story about orphans at the time that Madonna was adopting her second child.”

At the same time Malawi and other parts of Africa were experiencing a rapid influx of Chinese investment and Chinese nationals – following the formalising of Malawi’s diplomatic ties with the People’s Republic of China. Schafer says that she felt this story would be a fascinating lens through which to view and engage in the debates around the implications of China’s involvement in Africa.

“While most debates around ‘China in Africa’ at the time was focused on the so-called ‘colonisation’ of her economies and natural resources, this story showed a unique aspect of China’s cultural influence on the continent. I was struck by how this orphanage was strangely reminiscent of the Christian missions during the colonial era – only here African children had Chinese names and instead of learning about the West, they were learning about Chinese culture and history. I felt the orphanage would be the perfect metaphor to explore the growing relationship between China and Africa, but also as a mirror of Western colonialism.”

At the Amitofo Care Centre (ACC), where Buddha in Africa is shot, Malawian children are given Chinese names and taught to read and write Mandarin. There, these children wake up at 04:30 am to pray inside a Buddhist temple and they are masters of the art of Shaolin Kung Fu at a young age.

Our guide into the world of the Buddhist orphanage is Enock Alu – one of 300 children growing up at ACC. At the age of seven Alu was one of the first children to be recruited from his village and offered a place at ACC, when founder Master Hui Li – a Buddhist monk from Taiwan – opened it in 2003. At the time, Enock was living under the care of his grandmother after his mother passed away and his father had left and re-married another woman. While in his final year of school, Alu is torn between trying to hold onto his Malawian roots and the opportunities afforded to him by his Chinese upbringing.

“The first time I met Enock was when I was doing a short video feature and I asked them to identify one or two of the kids who I could profile and so they introduced me to Enock, who was one of the star performers and the top of his Kung Fu class. He was only 12 years old at the time, he was fluent in Mandarin, and I was captivated by the story of this young Malawian boy with dreams of becoming a Kung Fu film star like Jet Li,” explains Schafer.

About a year and a half after first meeting the young boy, Schafer returned to the ACC to start development on the film, and wanted to know more about how Alu and his friends were making sense of themselves between two very contrasting worlds: “I was surprised to learn that Enock knew very little about his personal history. He had never even seen a photograph of his parents before,” says Schafer, “and so the first part of filming very much involved initiating a process of reflection into his past… I always imagined that at some point some form of conflict would present itself between these two very different cultures and worlds Enock inhabited. And so I was very much focused on observing his shifting relationship between his community in the village, on the one hand, and his new Chinese family, on the other.”

Additionally, Schafer says that she was also interested in capturing the boy’s experience of feeling like an outsider in terms of his longing to belong to his village community as well as the challenge of fitting into Chinese culture – “and then the realisation that comes towards the end of the film that he will never completely belong to either of these worlds.”

Buddha in Africa was shot sporadically over a period of five years, with Schafer travelling to Malawi for two to three weeks at a time as she acquired funding. “Most of the footage used in the film was shot in the final year when I had more resources to shoot on my camera of choice and by then I had established a solid relationship with all the characters in the film,” she comments.

Due to budget constraints, Buddha in Africa was shot on several different cameras, depending on the available budget at the time of shooting. “It was only in my final year that I was able to afford the Canon 5D Mark III, which was ideal for the low light conditions I was working in,” comments Schafer, who paired the camera with a combination of lenses – a 50mm prime, a 17-40mm wide and a zoom lens. “I also had my old video camera that I used for sound and could capture the radio mic feed on one channel and the rifle mic or, when I had a sound assistant, the boom, into the other. It was quite cumbersome spending 12-18 hour days with all these cameras, lenses and mics, but I got the hang of it. Well, I had no choice really!” Schafer adds.

Editing on the film was done by Schafer with the help of a team of assistant editors “and some input from editor Catherine Meyburgh, up to the rough-cut stage,” she says. “That took about three years after filming ended completely. At this point, I was able to secure the interest of a Swedish producer from Momento Film who came on-board as a co-producer to support the final stages of post-production. This enabled me to work with two very good international editors who refined the story and turned our rough-cut into a film.”

The final colour grade and online was done by The Monk and Priest Post in Cape Town: “This was an award that I received through the Cape Town International Film Festival Works-in-progress pitch. Without this, we would still not have a finished film,” comments Schafer.

Excitingly, Buddha in Africa was awarded the coveted Best SA Documentary award at the recent Durban International Film Festival, which means the film automatically qualifies for Oscar consideration. “The journey of making and completing a documentary can be a long and challenging process and it is very meaningful to have this affirmation and recognition here, at home, at the Durban International Film Festival, where we first pitched the project several years ago,” comments Schafer. “With regards to the Oscar consideration – we are thrilled and immensely grateful to have the opportunity to be considered for an Oscar nomination.”

Buddha in Africa is an international co-production with Momento Films in Sweden. Paris-based sales company CAT and Docs is representing the film internationally, while AfriDocs is the African broadcast partner. Additionally, the documentary has already sold to several territories and been broadcast on NHK in Japan and ARTE in France and Germany.

Buddha in Africa will be broadcast on AfriDocs, the free-to-view VOD platform and broadcast documentary strand, across Africa in December.