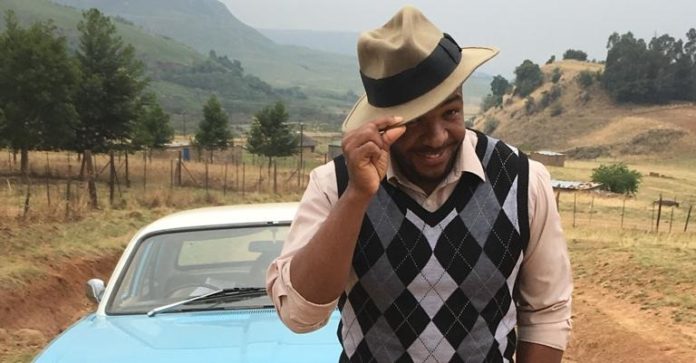 When Sibusiso Khuzwayo read Thabo Mbeki’s biography, The Dream Deferred by Mark Gevisser he was inspired by a small story about a boy who read letters to villagers at a time in our country when it suited the regime to keep black South Africans illiterate. Sibusiso’s mind started churning, imagining the challenges of being a ‘letter reader’ for a young boy. What powers could Sibusiso give the young boy?

The result is a short film that crew and cast fell in love with and that was shot recently in a remote mountain village in the magical Drakensberg.

The film tells the story of Siyabonga, a 12-year-old boy from Johannesburg who is sent to a village in KwaZulu-Natal to live with his grandmother while his parents are sorting out their marital problems. As a city boy who is not accustomed to doing household chores, Siyabonga struggles to adapt. He discovers the power of words as he reads letters that put a smile on people’s faces, until one day, a letter with bad news lands in his hands. A letter addressed to Nobuhle – a beautiful 25-year old wife of a migrant worker living in Johannesburg.  He takes one look at this beautiful woman and falls in love with her. As Nobuhle waits anxiously to hear the words of a long-awaited letter… Siyabonga realises that the letter outlines the end of Nobuhle’s marriage… he can’t bring himself to break her heart, so in that instant, Siyabonga decides that Nobuhle deserves better.

Over the last three years, producers Cati Weinek and Dumi Gumbi have worked closely with Sibusiso to make his dream of directing a film come true. “It has been a privilege working with Sibusiso, a writer who has created the most exquisite script and who is a beautiful visual story teller on set. So, we wanted to make sure to surround Sibusiso with the best talent in the country, from Lance Gewer as Director Of Photography and stars like Andile Gumbi as the lead,” said Cati Weinek.

The young man who steals the show in front of the camera though, is Bahle Mashinini, the 13-year-old Jo’burg based actor who plays the letter reader in the village. Sibusiso states that the casting took many months as everything hinges on the authenticity of the boy’s performance.

Dumi Gumbi points out that this initiative is part of The Ergo Company’s young directors’ programme to develop new voices in industry, but like all films it needs investors! In this instance finance was secured via the KZN Film Commission, the National Film and Video Foundation and Panavision and Panalux, who donated equipment. The film was shot on the Red Dragon and will be seen at local and international festivals and hopefully on our television screens. “Usually broadcasters don’t buy short films but we hope that the quality of the film will speak for itself’, said Dumi Gumbi. Sibusio Khuzwayo hopes to make a full length feature based on his short.