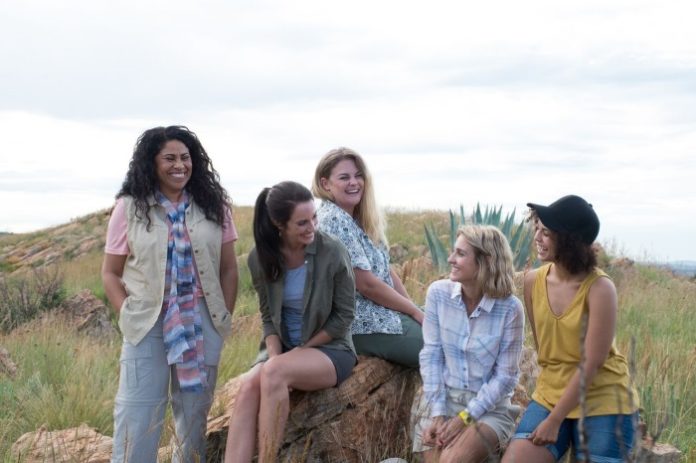 The adventure film, Stroomop (Ivan Botha’s directorial debut) that was watched on the big screen by over 116 000 people and earned R7 434 677 at the local box office, is now available on DVD at selected retailers as well as on the DStv BoxOffice.

“Stroomop had an exceptional run of 11 weeks on circuit and is up to date the biggest South African film at the box office for 2018,” says Pieter Geldenhuys from Filmfinity (Pty) Ltd.

This film is about more than just life and death, it tells the story of five women – Lana (Donnalee Roberts), Vivian (Simoné Nortmann), Adrie (Chanelle de Jager), Diona (Ilse Klink) and Nixie (Carla Klassen) – who are being tossed about by life’s rough waters and drowning in their own lives. Coincidence takes them on an adventure on the Orange River. Here the unthinkable happens when their boat capsizes, the river guide goes missing and they find themselves in a battle for survival in the wilderness.

The journey irrevocably changes their lives as they struggle through the pain and fear together. Themes which the film explore include self-discovery, forgiveness, acceptance and healing.

Armand Aucamp, famous for his roles in Ballade vir ’n Enkeling, Die Boekklub 1 and 2 and Knapsekêrels stars as the river guide, Guy. He is joined by a number of other familiar faces.

“Stroomop was really one of the biggest adventures of our lives. It is our absolute privilege that the characters and story can now live on in people’s homes. We look forward to sharing this epic and emotional journey on the Orange River with more people. We would like to thank all those who have already supported Stroomop on the big screen and for all the wonderful feedback. We tell stories and make films for the people, so there is nothing more special than receiving someone’s sincere and heartfelt feedback. Relax, sit back and enjoy!”  said Ivan Botha and Donnalee Roberts.