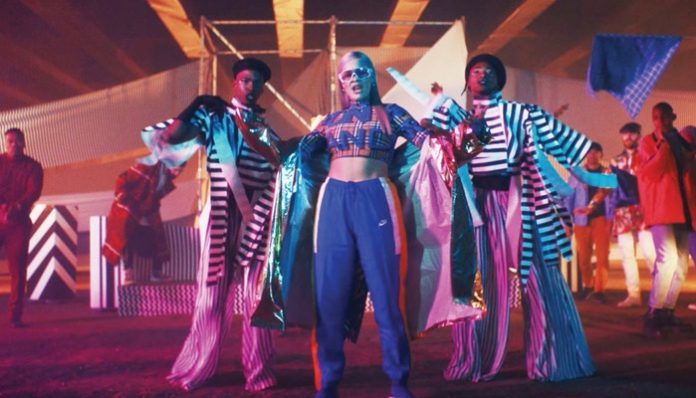 France-based, South African-born photographer and director, Chris Saunders is the creative talent behind the intercontinental music video. The Johannesburg-born and bred filmmaker is passionate about using film and photography as a tool to understand youth, dance and music subculture, with a large part of his focus on the Pantsula dance culture in Johannesburg.

“I think you always have barriers in a city like Johannesburg, and photography and film are great ways to be able to work while exploring and trying to understand the people and the place better. This has always been the case with my relationship with Johannesburg. I do love the city but especially the people from South Africa and their immense cultures,” he says.

Saunders recently started working with a US-based production company, Believe Media. It was executive producer Jannie Mcinnes who gave Saunders the script for the music video and helped him through the conceptual process. A brief was then given to him by the artists involved and record label Asylum Universal.

“In the original brief the band wanted to create the feeling of an international carnival or festival where the video lives seamlessly within a global landscape. This is why we shot between Ridley road in London, a very multicultural market street and downtown Johannesburg where we incorporated a mixture of dance subcultures. This was my way of tackling their request and at the same time producing something that resonated with me personally,” says Saunders.

Production commenced in June 2018, with one day dedicated to London and another day in Johannesburg. As a result of the number of artists featured in the video, and their availability between touring, the project took six months to complete.

“I wanted to achieve a vivid, lively video that crossed between London and Johannesburg fluidly telling an almost seamless story. The video shows a globalised world with people from multiple cultures living in all places. I also wanted to create a South African carnival experience mixing GQOM culture from Durban, Pantsula dance from Johannesburg, and the world music feel of the musicians from London, in one tremendous and loud visual experience,” describes Saunders.

The Let Me Live video begins in Rudimental’s homeland in Dalston, East London with eye-catching scenes at the colourful Ridley road market. For the Johannesburg-leg Saunders chose more neutral settings in downtown Johannesburg, under the M2 bridge flyover with the artists and dancers bringing all the action.

“I worked with one DOP, Alex Jamin, who I had made a music video with previously; he was an important link between maintaining the look with different crews and light between London and Johannesburg. The process was extremely collaborative, and I am by nature this type of director, I like to deliver a brief to my crew and see what they come back with naturally, trying hard to incorporate new ideas into the mix as the process develops.”

Thrilling shots of a fierce female stunt driver are shown in some scenes, while more than forty dancers including Pantsula, GQOM and vogue performers are seen in vibrant costumes showing off their skills alongside various musicians. “On the Johannesburg side, all of our dancers had personal costumes designed in collaboration between fashion designer/stylist Neo Serati and art director/artist Tamzyn Botha. I wanted to try to create a less conventional wardrobe for the dancers, taking the idea of their cultures and projecting them into an intercontinental more modern fashion,” shares Saunders.

For the London shoot, Saunders was assisted by producer Shabana Mansuri, and for the South African-leg of the shoot Ola! Films executive producer Olivia Leitch and producer Maurice Dingli were on board. About 30 per cent of the music video was produced in London, while the remaining 70 per cent was shot in South Africa.

“We shot on the Arri Alexa mini for its lightweight, high-quality aspects; this is because we shot all of the shots on the steadicam/Arri Trinity. We also shot on a combination of older lenses in London, if I’m not mistaken Alex chose the same lenses that the Godfather was shot on for that side and similar lenses in South Africa.”

For the London shoot, Mark McPadden was the steadicam operator, while Joe Oosthuizen completed the Johannesburg steadicam shots.

The video was shot mostly with controlled incidental light, but when moving into the evening scenes, artificial lighting was used.

Saunders notes proudly that he incorporated a shot from his iPhone X in one of the last scenes: “After we wrapped there was a tremendous uproar and celebration, this made the cut, and I was amazed at what you could do with a cellphone!”

Only one scene required CGI as part of a legal agreement with Barcadi. “We were initially supposed to have a bottle in one of our shots, but in the end, we replaced a billboard behind the taxi shot in Mr Eazi’s tracking scene with an artificial billboard with supplied graphics,” explains Saunders.

Apart from the music video, Saunders commissioned director Batandwa Alperstein aka TAKEZITO, to create a behind-the-scenes documentary about the process of creating the music video with the aim of encouraging cultural collaboration and respect for creative expression across the globe.

“We shot on the Arri Alexa mini for its lightweight, high-quality aspects; this is because we shot all of the shots on the steadi-cam/Arri Trinity.”