SCREEN AFRICA EXCLUSIVE: Protea Electronics has been in the business of providing engineering solutions for more than 70 years. According to Shaun Kerr, the manager of Broadcast Sales at the Protea Technology Group, the reason for this longevity can be attributed to a number of factors.

“First and foremost, it’s about making sure we are partnered with international leading brands, and – following on from this – it’s about the relationships and the partnerships we form with local suppliers and our customers. If we didn’t have these strong relationships, we couldn’t have the longevity in the business.”

Kerr also talks about the “importance of listening to the customer’s wants and needs, while at the same time being able to understand what the anticipated and expected outcomes are.” He points to Protea’s ability to “adapt to changing circumstances in the context of changing technologies. We have a versatile, vertical structure to the business and it allows the company to adapt very quickly. On top of that, we have to be – and we are – a very financially disciplined company, and this leads to financial strength. It all goes hand in hand with the goal of listening to customers, engaging with their needs and delivering realistic outcomes.”

The company had an opportunity to test these credentials recently, being contracted to rig up Urban Brew Studios’ cutting-edge new studio spaces, an exciting project that is leading the revitalisation of the former Brightwater Commons entertainment centre.

Verona Duwarkah, the CEO of Urban Brew Studios, made it clear that they were looking for a space that would “equip the business as much for the future as for the present. A space that would remove the ceiling for growth.”

While this might have been a challenging prospect in and of itself, the timelimes on the project were extremely tight. Jacques Welthagen is a Pre and Post Sales consultant at Protea, but acted as project manager on behalf of Protea and Systems Integration for the Urban Brew Turnkey Project. In his view, “the team performed wonders in a very short space of time.” The move, which included an extensive redevelopment aspect, kicked off in September 2017. As Welthagen puts it, “We had an immovable deadline: we had to go live on 1 April 2018 – and we did it.”

“By the time we arrived at the new studio spaces, most of the building was up but it was still a construction site, so we were all in hard hats,” recalls Kagiso Mabe, who deals with Pre and Post Sales at Protea, including demoing kits and equipment, installation and training.

In terms of the system’s design and set up, Welthagen explains that “although we represent a wide range of products at Protea, we are pretty much agnostic to specific models of equipment; that preference usually resides with the client. Our process is always the same: once we finalise the bill of materials, we compile the final workflow and plug in the pieces to make it all work. It is so important in the role of Systems Integrator to be open-minded about solutions and not be forced into preconceived ideas and habits.”

As part of the strategy for making the new studios ready for tomorrow’s markets, Urban Brew opted for fibre-optic over triaxial connectivity, one in a series of upgrades that saw them overhaul outmoded SD systems to achieve HD, 4K capability. As Theunis du Toit, acting head of Facilities at Urban Brew, points out, the switch to fibre also allows for “a modern, streamlined operations system, where studios are not physically linked to individual control rooms. You get a much more fluid and efficient use of the space by being able to seamlessly link footage from one studio to a different control room using fibre.”

From a project manager’s perspective, Welthagen notes that “the facility is rather expansive and – because you need to manage large data streams over large distances – fibre is ideal for the scale of economies within the studio.” Mabe adds, “We catered for the future by focusing on the backbone of the studio, as most equipment runs on fibre connectivity. So when it comes to broadcasting in 4K – probably in the near future in South Africa – the studio will be ready, their infrastructure already allows them to achieve it.”

For tech junkies, Urban Brew’s new studios feature a lot of products to be excited about. Mabe explains that, “All the equipment we installed was familiar to us, so it was really just a matter of hooking up the component parts to satisfy the system.”

But this system is certainly impressive – Welthagen describes it as a “perfectly attuned orchestra, with each element contributing its own nuances to complement the rest” – and he provides us with a look under the hood. “The core is built around a Grass Valley Korona K-Frame V-series 2M/E recording onto Grass Valley K2 Summit 3G Production Servers. The K2 Summit’s 3G MPEG-2 Multicam option can record up to four video streams with K2-Dyno S Replay Controllers. The CGs (Character Generators) are Ross Xpressions and communication is from Clear-Com and Mirror Image Prompters.”

On the camera side of things, “Acquisition is via new Grass Valley LDX-82 CMOS imager-based cameras and Focus-75 triax-based cameras, as well as some Legacy Sony triax systems to convert the signal to fibre. HDX-PLUS and some Cobra units convert all SMPTE fibre signals to dark fibre in the server room. When a studio is not in record mode, it is not making money, and so we wired for 26 camera control units and XCUs, with more to be added soon.”

However, Welthagen is clear about what he considers the “flagship of the new facility”: its high-tech data centre. In his words, “This represents the culmination of the traditional Master Control Room in broadcasting. All signals merge and are distributed from the data centre; all mainframes and storage reside there. During Phase Two of the Urban Brew project, the Network Operations Centre will also attach to the data centre to give a helicopter view of operations, as well as status reporting. Key to this will be iTX and iControl integration, with OOYALA displaying the dashboard on Grass Valley Kaleido multiviewers. This will give a real-time snapshot of the whole facility, as well indicating faults via Kaleido’s Penalty Box feature. This is a powerful, rules-driven engine designed to flag errors and events that require operator or engineer intervention.”

From Urban Brew’s perspective, du Toit describes the new facility as “our piece of gold. Because everything is fibre-based, all our footage is fed directly into the servers in the data centre. From there, it goes straight to the adjacent ISP room where we have two transmission lines, which gives us good redundancy, and a failsafe in the event of one going down unexpectedly.”

Reflecting on the project, Kerr admits it was “challenging in terms of the timelimes and the deadlines, but also because changing technologies require change management; there is a human element to them. So in the end it was a great project, because we were able to install this international-standard studio infrastructure, and the success of the venture depended on the excellent working relationship we formed with Urban Brew Studios. We look forward to a long future partnership with the group.” 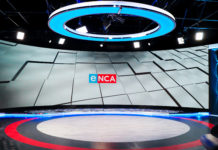