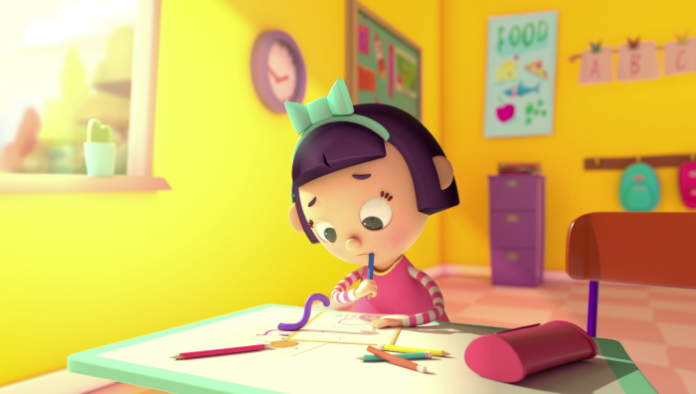 Tulips and Chimneys’ executive producer Nina Pfeiffer moved into the director’s chair for the first time for Tales From Teacher, a back-to-school campaign for Fruits of the Loom that was featured on Adweek and selected as Editor’s Pick on AdAge.

In each of the three spots, Pfeiffer and her team animated a real note that a teacher sent home with a student: about why Maya may have a worm in her pocket; how a boy got a nacho in his eye; and how Nikki’s friend accidentally ate her lip-balm. As the campaign tagline says, “Parents can’t be prepared for everything but they can be prepared for the school year with Fruits of the Loom’s back-to-school packs.”

“As soon as we read the brief, we knew we were in for a fun ride,” says Pfeiffer. “The scripts were so wonderfully eccentric that within the first brainstorm we knew we’d have to design a world as quirky as the characters on the page. Nacho, Worm and So Hungry were a great opportunity to explore a brand new aesthetic with exceptionally vibrant colours, wonky designs and characters that could melt the heart.”

Produced by Strange Beast, the campaign is a departure from the intricate, layered animations Tulips and Chimneys is known and loved for, like Cerebos Snow, which won a Gold Loerie in August, or The Curse of the Sad Mummy, their League of Legends music video that has over 16 million views on YouTube.

“As the industry grows and becomes more competitive, we recognised that we needed to develop a strategy to match the industry’s demands and ensure we had an offering that was diversifying,” says Tulips and Chimneys’ producer Dianne Makings. “We’ll always continue to do highly-crafted, detail-orientated pieces led by Ree Treweek, but now we’re adding Nina’s passion for more performance and character-driven pieces to what we offer.”

Pfeiffer fell into the role of producer when she joined the animation industry but her background and education was more creatively rooted. “While she’s always been credited as the EP, the workflow of the studio means she is always very involved creatively on all the projects,” says Makings. “We’ve been waiting for a project where she could swop roles a bit, so the moment the brief came in Nina knew this was the one that she wanted to lead creatively.”

“I was very inspired by the surrealism of the piece and really connected with the stories,” says Pfeiffer. “Most of our pieces are usually quite detailed visually.  They’re more about an explosion of visuals, whereas these pieces were very strongly driven by the characters’ performances. They are all supported by the visuals, but it was firstly about the performance or role the ‘actors’ had. We also loved that it had so much humour and we spent a lot of time thinking about how to bring the humour alive.”

Pfeiffer loved working with US agency Crispin Porter & Bogusky. “They were amazing,” she says. “They understood that animation takes time to craft and that set-backs could happen any time in the process, so they gave us the opportunity to craft the spots up to delivery, only commenting on elements they really felt strongly about throughout the production process. They didn’t throw any curve balls that set us back or ate into our crafting time, the feedback was always constructive, and they trusted us to take it to the best it can be.“

Likewise, the agency benefited from having a producer directing, as Pfeiffer brought all her logistical experience to meeting the tight nine-week deadline for three spots.

“We had to really make sure that every day was productive and that no process was delayed by a missing link in the chain or by miscommunicating anything,” says Pfeiffer. “Translating our designs into 3D had to be almost perfect with the first go, so Marc Moynihan, our lead production designer, made very detailed designs and notes upfront on what we needed to achieve, and for animation we did live action performance videos as references for the animators, to make sure we left little room for errors.”

The end results are spots which ooze charm, humour and a whole new way of looking at the playground.

Watch the Nacho, Worm and So Hungry spots. For more information and full credits, visit the Tulips and Chimneys website.