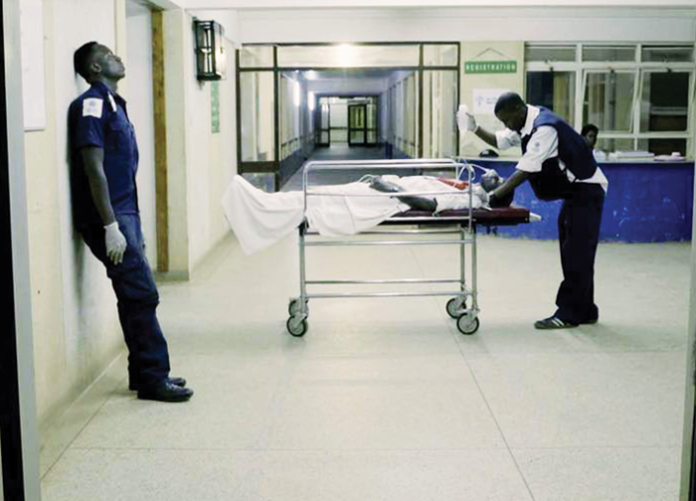 SCREEN AFRICA EXCLUSIVE: In 2015 Alex Madaga, a labourer from Nairobi in Kenya, was a victim of a hit and run accident. Madaga was fortunate to survive the incident itself, only to pass away just 18 hours later when the ambulance carrying him was turned away at five different hospitals because he lacked the funds needed to be admitted and treated.

The tragic events that led to Madaga’s death and saw Brian Ochieng Odhiambo spend 18 hours in an ambulance attempting to save his life, made news headlines.

“I read the story on the daily newspaper back in 2015 when the story of the late Alex Madaga hit the news. My first impression was, how can this happen in Kenya’s capital city? How can an accident victim be denied admission on the basis of lack of money? It felt like a story that needed to be told, to serve as a reminder that such a situation occurred, and it should never occur again. It felt like holding up a mirror for our society and pointing out that there are avenues for change, many opportunities to make things right.” expresses Kenyan award-winning filmmaker, Kevin Njue.

Njue was inspired to pen down a film based on the brave paramedic’s ordeal, in an effort to inspire debate and seek change in the regulation of Kenya’s health system.

Odhiambo, the heroic paramedic, worked as a consultant to Njue during the development stage of the filmmaking process, offering invaluable insight into the life of a paramedic. Additionally, Odhiambo provided intricate detail on the events that cost Madaga his life on that fateful day.

In the film – aptly titled 18 Hours – Zach, played by Nick Ndeda, works for Raven Paramedics Services. While on duty, he receives an emergency call from a witness about an accident that happened along a highway; a pedestrian has been involved in a high-speed hit and run while on his way home from work. Zach then sets out on a rescue mission with his driver Mark, played by Brian Ogola.

Zach and Mark find the injured man bleeding profusely from his head and not moving – they manage to get him into the ambulance. The two men are later joined by the victim’s wife Sabina, played by Sue Wanjiru. Together they set out to different hospitals in a race against time to save the victim’s life.

Rejected by those who are meant to assist them, Zack makes every effort to keep the man alive. After spending 18 hours in the ambulance attempting to save the man’s life, he is finally admitted to a hospital but dies shortly thereafter.

18 Hours – written and directed by Njue – was shot on the Sony A7s, in and around Nairobi and Machakos in Kenya in just 12 days. “We filmed on the Sony A7s mainly because of its performance in low light. The camera is tiny compared to others which was a bonus for our handheld style,” says Njue. “We wanted to achieve an ‘out of body’ experience with the feel of the film through our handheld documentary style,” he adds. Production and post-production were handled by Rocque Pictures.

18 Hours made its debut in Kenya late last year, which included a marketing campaign with Kenyan athlete, David Rudisha to advocate for better emergency response in the country. The film was also instrumental in pushing for the Kenya Health Act of 2018 which states that health facilities should administer necessary immediate health care to prevent death or worsening of a medical situation.

“The highlight of the film so far has been the reception it gets from the audience wherever we have screened. More so, the impact it has had on the health policy push in the country,” Njue comments.

The film will kickstart its festival run with the upcoming Zanzibar International Film Festival, which takes place from 7 to 15 July 2018. “Zanzibar is the first festival screening. We had to start here because it was where we first screened our first short film back in 2014. It is our second home. As for other festivals, there are several lined up within the year,” Njue concluded.