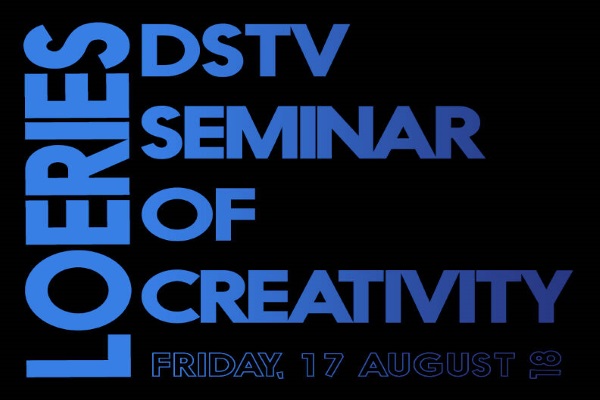 The DStv Seminar of Creativity offers advertisers, marketers and all members of the creative industry, a one-day only opportunity to see some of the best creatives in the world, all on one stage.

“An outstanding lineup of creative leaders from across the globe are coming to inspire the best creatives in the region,” says Fahmeeda Cassim Surtee, CEO at DStv Media Sales, about the DStv Seminar of Creativity, that takes place on Friday 17 August as part of Loeries Creative Week in Durban.

Now in its sixth year, the seminar is a highlight of Loeries Creative Week.

“This is the only opportunity of its kind for our local creative community to be directly exposed to such world-class thought leaders,” says Loeries CEO Andrew Human. “The DStv Seminar is an unmissable event for anyone who wants to be inspired by such great minds. It’s an honour to have them join us for Creative Week and I would urge everyone to hear their thoughts.”

Speakers for this year’s line-up include:

• Fabian Frese, chief creative officer of Kolle Rebbe in Germany. His talent has won him an impressive number of national and international awards. He’s currently responsible for Netflix and the global Lufthansa account.

• Mzamo Masito, chief marketing officer of Google Africa. His role entails bringing to life Google’s mission to organise the world’s information and make it universally accessible and be useful so that Google’s users and partners can grow in Africa.

• Nicolas Courant, executive creative director of Ogilvy & Mather Singapore. In his current position, Courant has been involved in award-winning creative work for Unilever, Allianz, Coca-Cola and Philips. He has been awarded by every major international contest and his work has featured on TED’s Ads Worth Spreading.

• Ramsey Naja, chief creative officer of J. Walter Thompson Middle East & Africa in Lebanon. A former deejay, theatre director and TV news anchor; under his stewardship JWT MENA has become one of the region’s most awarded networks, and has been voted network of the year twice.

• Sebastian Padilla, the co-founder of Anagrama in Mexico. From their beginnings in a cramped bedroom, Anagrama has grown into a studio that employs more than 30 designers, architects, programmers and software engineers that work in more than 40 countries. While Rihanna may be their most celebrated client, they also work for major brands such as Armani, Nike and Vitra.

• Swati Bhattacharya, chief creative officer of FCB Ulka in India. Bhattacharya believes in the art of advertising and is fascinated by how the thoughts of one person can entertain many others. She sees that as a responsibility and strives for the magical connection between human and brand truths.

More information on the Seminar and Loeries Creative Week can be found on the website.