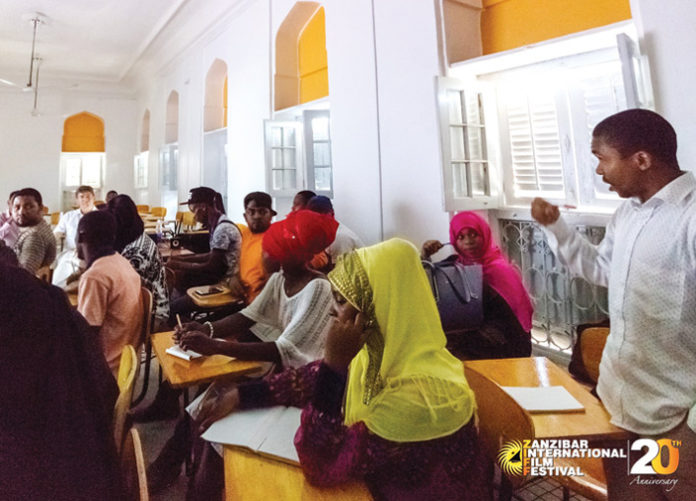 SCREEN AFRICA EXCLUSIVE: How do we ensure that the next generation of filmmakers in Africa have the skills and tools necessary to compete in the global environment? Are there enough film schools across the continent to provide the training and resources that are needed? What bodies and organisations are working towards supporting and developing film and content production skills in various countries?

These are just some of the questions I have been asking myself and others in the last few weeks.  Working towards putting together the second annual Film School Programme for this year’s Zanzibar International Film Festival (ZIFF), has gotten me almost obsessed with the state of film and related training in the region. It has been unexpectedly challenging to develop this year’s programme in terms of finding partners and sponsors willing to “put their money where their mouth is” in support of young people and their future.

The Film School Programme at ZIFF started last year and the festival was overwhelmed with the response from young people, educators and facilitators. Over 80 young people travelled for two days across Kenya and Tanzania to attend two days’ worth of workshops and events. However, attempting to expand the programme this year with the support of related brands and organisations has proven virtually impossible.

The demand and hunger for these skills continues to grow, and one can pretty clearly correlate the size and growth of a national film industry to the amount of film schools that exist. Africa’s leading countries in terms of film production (albeit original films or servicing international productions) are South Africa, Nigeria and Kenya, so not surprisingly one finds these countries also have the most opportunities for film related education.

Of course in South Africa there is a wide array of film schools and programmes to choose from; AFDA, Big Fish, City Varsity, University of Cape Town (UCT), SAE Institute, University of the Witwatersrand (WITS), just to name a few. In fact, the Wits School of Arts was even named as one of the top 15 film schools in the world by The Hollywood Reporter in 2016 and a cursory search can find at least 50 different institutions or programmes across the country.

Nigeria also has over 50 film schools across the country, and not just in the major urban centres.  The film school landscape in Nigeria is not just quantitatively large, but also diverse in approaches and programmes. The schools include well-known ones like the National Film Institute, Jos; African Film and Media College, Lagos; Cifraz Film Institute, Bauchi; Disciples Film and Television Institute, Lagos.

Many of these schools are also creating international partnerships, for example, in the last few years the Asian Academy of Film and Television has partnered with the National Film Institute, Jos to present the International Student’s Film Festival at Jos, Plateau State, Nigeria.

It was also just announced in March 2018 that the French, German and Japanese Embassies in Nigeria are collaborating on setting up film schools in the country, according to Denys Gauer, French Ambassador to Nigeria.

Kenya is also really gearing up in terms of film and related education and training, with the government even considering the inclusion of visual and performing arts within its new school curriculum. There are about five public institutions offering degrees and a host of other smaller private academies and institutions offering both short and long courses.

In fact, most of the young people who attended last year’s ZIFF Film School Workshops came through two Kenyan based programmes – both of which provide technical content production training in high schools and primary schools. Re-tuning Cinema in Africa is a programme headed by Mark Wambui that teaches filmmaking in a host of schools in Nariobi, while the University of Nairobi has a project that reaches into dozens of high schools and primary schools across the country.

The number of film schools in a country however is not always an indicator of the quality of the education or the outcomes being produced. The quality of degrees available across the continent varies, and also the ability of many young people to pay for this kind of education is another major stumbling block.

As with most educational needs in Africa, the only way to really ensure that enough students are able to attend quality institutions is to create partnerships between the schools, government and the private sector. Projects such as the Film School Programme at ZIFF is but one of these initiatives that needs support from the East African region. This year’s programme may only take place in a very limited format unless sufficient funds and partners can be found. Anyone interested in getting involved can email workshops@ziff.or.tz.