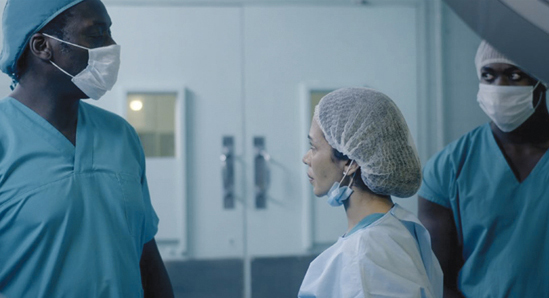 A healthy human body has the capacity to save up to seven lives. According to the Organ Donor Foundation (ODF) the heart, liver and pancreas can save three lives, while the kidneys and lungs can help up to four people.

However in a country like South Africa where sadly less than 2 per cent of the population are organ donors; the long waiting period for a possible donor – who must also be a perfect match – can be a helpless race against time left for one’s survival. So as a parent would you bypass the system to save your child’s life?

The movie, Bypass brings awareness to the underworld of organ trafficking, which preys on the desperation of the wealthy whilst also taking advantage of the vulnerable and poor.

The film prides itself on being the first African medical thriller. Bypass draws inspiration from international films like Panic Room and Disturbia, as well as from Participant Media who are known for creating films with social impact. “I have always been inspired by Participant Media and their approach to using films as a medium for social change and in Bypass you see how desperation drives a mother to turn to the illegal organ trade in order to save the life of her son,” explains director Shane Vermooten.

The storyline follows the plight of cardiac surgeon, Dr. Lisa Cooper, who works at St. Lukes hospital operating and saving the lives of her patients. However when her only son is in need of a liver transplant, the chances of him receiving a donor seem to be stacked against him. An opportunity to save her son then presents itself but the doctor has to bypass ethical medical codes that she has held onto throughout her career. “A decision that leads her right into the heart of conspiracy, danger and an international organ trafficking syndicate,” shares Vermooten.

The movie takes place in two distinctive worlds; the first place being at St. Lukes, which was shot in the abandoned building which once used to house Woodstock Hospital. Veermooten confirms that while Woodstock was perfect for most hospital scenes, the theatre scenes were impractical and the team was stuck until they found an Intercare Day Hospital which was willing to let them shoot at their theatres. Lieschen Koch of Lieko Studios was the film’s make-up and prosthetics artist who did incredibly realistic and genuine work in showing the bloody and gory images of a real-life medical situation. “She did an incredible job with bringing the medical scenes to life which allowed us to shoot beautiful close-ups of the operation as opposed to having to hide what we were seeing and fake it with camera angles,” Vermooten remarks.

At the hospital scene we meet the top cardiac surgeon, Dr. Cooper played by actress Natalie Becker, who happens to be the only female surgeon and a proud mother. “In the world of Bypass, our main protagonist needed to be the top cardiac surgeon in the country and so we saw this as a great opportunity to challenge the stereotypes of what a top surgeon in South Africa can look like in 2017. So we were very intentional when we made the decision to cast that role as a woman of colour,” Vermooten says.

Dr. Cooper is accompanied by a leading cast of male doctors and well-known actors including Haken Ke-Kazim (Dr. Chris Moanda), Dean Lotz (Dr. Wright), and Greg Kriek (Martin Fisher) as well as a young boy who appears to be a new face to the big screen, nine-year-old Joel Brown (Sam Cooper). “When working with Joel I was very intentional to never give him the full story, so every day on set we would create the story together, and that helped him give an authentic performance,” Vermooten says.

Joel plays the sickly son to Dr. Cooper, his mother then confides in one of her colleagues, Dr. Moanda, who offers her hope in the illegal organ trade market of East Africa.

Dr. Cooper heads to East Africa and leads us to the second part of the film, in a dingy and dark part of Jalloh, where the doctor finds herself out of her depth. “I wanted it to look more like a dungeon and less like a standard prison, we filmed at the old Rhodes Memorial Zoo which is on the side of Table Mountain and so it was a big challenge to bring in everything we needed but the team pulled it off beautifully and it takes the film to another level,” he said.

Vermooten expands: “Each of these worlds came with their own very specific stylistic choices. The first act was shot on heads and legs, to enhance the stability and control Lisa (Dr. Cooper) has. From the start of act two we ditched the legs and spent the rest of the film with the easy rig and steadicam to show the instability and insecurity Lisa felt in the unfamiliar world she entered. Our colour palette was also filled with a lot of medical blues and greens which we pulled through both worlds in the wardrobe, production design and grade. The only time red was used was when blood was in the scene.”

The film was shot in just 24 days using the Sony FS7. “We choose the FS7 because it allowed us to shoot internal 4K and its light-weight and versatility allowed us to move fast often having to shoot 35 to 40 set ups per day,” says Vermooten.

As with any thriller movie, the use of sound design was quite selective and instrumental in giving the viewer the cold chill down their spine. “Sound design plays a huge role in any thriller and one of my favourite parts of post-production is sound design. In Bypass we were meticulous with the sound design and it definitely heightens the tension and is one of the most impactful elements in the movie,” he says.

Other work on post-production was handled by Chris van der Burgh who did the offline edit at Media Village Productions, while Matthys Pretorius did the grading at Refinery Cape Town. The final mix was done by Nic Turton at Triplane.

The film then had a local release in early May with sold out screenings across the country. While Vermooten hopes that more viewers get to watch and enjoy his movie, he also intends on imparting knowledge and creating change, which is why he decided to partner with ODF. “As we were looking into the issue of organ trafficking we realised that part of the solution was having more legal organs available because with a sufficient supply people would not be forced to turn to the black market. With this in mind we always knew that we wanted to add an action step so that people could respond to the movie,” he says.

Outside the screenings Vermooten had volunteers from ODF talking about the process of being a legal organ donor and encouraging South Africans to sign up and become donors, alternatively people could also log on to the film’s website and sign up there. The initiative has already seen a remarkable 40 per cent spike in organ donations. “We are very excited about this,” says Vermooten, adding that he hopes that the awareness campaign could reach not only the people watching his movie but also their families and friends.  – Gezzy S Sibisi