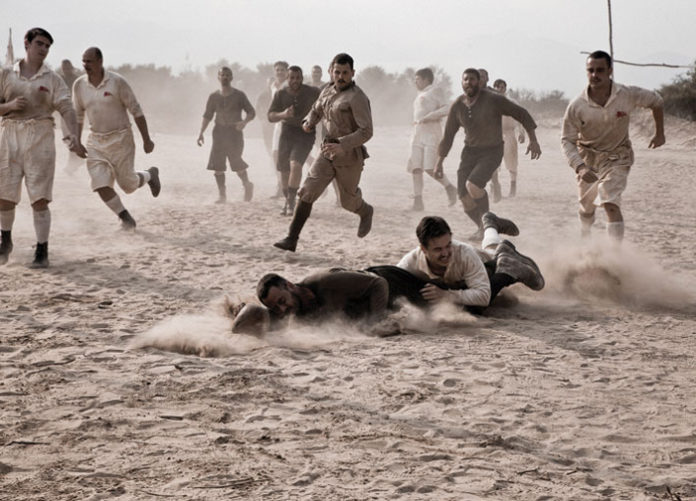 Sports scenes are a tough balance between hard hitting action and revealing moments of character development, both of which drive the narrative. In this scene from Modder en Bloed, a film set in 1901 South Africa, a game of rugby played out in a prison camp, symbolises tension between the Boers and the English in the Anglo-Boer war.

Sean Else on directing:

Sport in films has to be quite dynamic and well covered because audiences are so used to watching sports on television, which is covered from all angles and with many playback options. With Modder en Bloed we made sure that we covered the angles, but there is a lot going on within the characters and the games to drive the narrative. Planning and rehearsing the choreography was especially important in keeping the scene natural and realistic.

The game and movements were all written into the script and extremely important for the film. The rugby games are the chess game between the two ‘enemies’ and actually were our set battle pieces as the game of rugby becomes the metaphor for the continuation of the war between these two enemies within the prisoner of war camp. For crowd and character reactions from the side, we had stand-ins just run an eye line on the field after explaining the full choreography.

I hadn’t had much experience in shooting a sport film, so I had to do my homework extensively beforehand. I watched quite a few rugby games and did a lot of research into how filmmakers use the camera in relation to the action happening on the field. Rugby is an incredibly fast game with abrupt stops in the action. We chose to shoot the speed with a combination of hand held and dolly movements and then again to use hand held when the scene gets more intimate within the action. The first AC, Khyle Smith, wirelessly controlled the focus which further allowed me to get right into the action as it happened. Key grip, Alpheus Manaka had to lay six to eight straight tracks along the side of the field in a downhill fashion which made use of gravity to get the speed necessary to capture the fast paced running.

The entire film was shot using an ARRI Amira. It has an identical sensor to the ARRI Alexa family of cameras but it is considerably more lightweight and ergonomically designed for handheld shooting. I generally use wider focal lengths and watch the shoulders of the actors as they move. This allows me to predict most of their movements and keep them inside the 2.39:1 frame while still maintaining a frenetic feeling throughout.

We chose to build the rudimentary rugby field in a north/south line to enable us to keep the sun on either side of the field which allows for a certain amount of contrast with hardly any front lighting. I also relied heavily on the yellow/white beach sand that they games were played in to bounce the sun back into the players’ faces. Gaffer Manny Chonco was constantly at my side advising me on the sun direction and cloud movements and his team had an array of 12×12 unbleached muslin bounces for closer work.

In this film we had to focus on highlighting the action but also each character’s arc and progression. I think it’s important to cut the scene as the director and actors played it while shooting and then cut down from there. Very often if you cut something out of a scene before watching it in its entirety you may cut out a moment that, in the context of the scene, works very well. Obviously, pace is critical in a sports scene, so we had to trim down to heighten the action. What was particularly challenging with this scene was that there weren’t any commentators, as you might have in a modern sport’s film to drive the tension, so we had to make use of spectator reactions to build tension and drive the game forward.

I was never a good rugby player and that worked well for my character. The rugby they played back then also differed quite a lot from the rugby we know today, therefore not using a modern background was a challenge. We were also lucky in that the game itself was treated more as a battle and therefore the preparation was more towards getting the stakes high enough.  Physically we aimed to be fit enough to run and play a full day of shooting. The great thing about acting is that the situation dictates the scene.  If your homework is done, and you play the scene and what is needed in the scene, the character will be there.

For my character it was all about the showing of his strength combined with a softer, gentle side. Being an active sportsman, I’ve been exposed to various sporting codes in my life.  It’s all about digging into the old archives and taking out some unforgettable moments and feelings I had at that specific moment. The biggest challenge was fighting the sand element and keeping it out of my eyes so I could focus on where I was going. Timing was another challenge – when to rush in, when to hold back.  Being an important scene in the movie, timing of this specific movement made it tricky to be on queue every time.