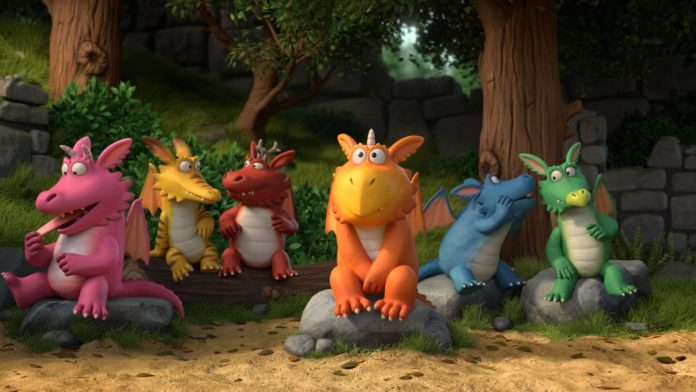 “Zog is based on the book by the Gruffalo team, Julia Donaldson and Axel Scheffler, and is about a young dragon that is at Dragon School, learning to fly, breath fire and basically become a holy terror!” explains Daniel Snaddon, co-director of the short film.

However, student life comes with a lot of challenges for the keen but accident-prone dragon: “He’s super enthusiastic, but has no talent and ends up hurting himself every time he tries his hand at something new. The book is about how an unusual friendship changes his life and his dream for the better,” says Snaddon.

Triggerfish Animation Studios has an ongoing relationship with publishing duo Donaldson and Scheffler and the Gruffalo team, which is managed by Magic Light Pictures. This partnership has produced award-winning film adaptations of other popular children’s books including Stick Man, Revolting Rhymes and The Highway Rat.

“My directing partner Max Lang pitched Zog to Magic Light Pictures in 2012. Of all the more recent books by Donaldson and Scheffler, he thought it would make a great film, as the characters and their journeys were very clear and relatable,” says Snaddon.

According to Snaddon, the concept for the film started taking shape in mid-2017, with he and Lang working together on the storyboards. The pair then sought various artists from South Africa and the UK to work on the project. “Our art director was Sarah-Jane Williams who was key in bringing the hand-made feel to the design and surfaces of Zog’s world. Daniel Clarke, Caroline Vos and Stephen Howard-Tripp were the concept artists. Andrew Wilkins oversaw modelling, while Darren Hing and Roxanne Joyner oversaw surfacing,” he says.

Zog took just over a year and a half to produce, with animation director Jac Hamman overseeing the 17 animators that brought the characters to life. Samantha Cutler was the lead character modeller and Malcolm van Aardnt managed the rigging of over 30 characters for the film.

Zog was produced using Maya, Arnold and Nuke, with additional VFX work done through a plugin called Phoenix FD – which was used to generate fire and smoke effects in some scenes. Kane Croudace, Faghrie Coenraad and James Bihl were the technical leads and Sue Mari-Sauer headed up VFX. “Everything was then brought together by Sarah Scrimgeour and her superb compositing team,” says Snaddon.

“Kaya Kuhn was our line producer, and though she was new to animation, she did an amazing job of planning and executing the production at Triggerfish,” adds Snaddon. “Aninka Jonk, Laura Irvine and Clare Savage did a great job of running the team on the ground.”

The film recently bagged an International Emmy nomination in the Best Kids’ Animation category and will compete against films from France, Brazil and India. The winning film will be announced on 31 March 2020 at the Cannes Film Festival in France.

Speaking about the nomination, Snaddon says: “We are thrilled, and hope that we win! I’m also really happy and proud of our team, as on Zog we had fewer resources than we did on previous projects and we still managed to pull off something really world class.”

The film had its television premiere on BBC 1 for UK viewers, and is now streaming on South African streaming service Showmax. Zog can also be ordered on DVD through Amazon.

Snaddon and his team at Triggerfish are thrilled that South African viewers can now get to watch the animated film and hope that the heart-warming tale reaches more audiences. “Zog was originally a BBC and ZDF (Germany) co-production. I’m thrilled that Zog is streaming on Showmax and I’d also love Zog to eventually show on national TV, and for either the SABC or kykNET to get some translations going!” he concludes.