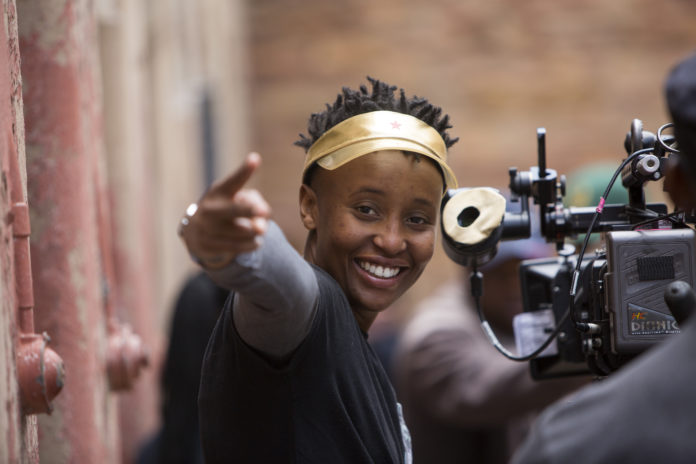 We spoke to award-winning cinematographer Gaopie Kabe about making her way in film, how she continues to thrive as a black female in a male-dominated industry and the process of shooting Lockdown season 5…

Give us a sense of your background as a cinematographer?

I am born and raised in the South Western Township of Johannesburg, Soweto. I went to Boston Media House, where I did a media course and specialised in video broadcasting. I began working in this industry at the end of my second year. I started at the bottom of the chain, as a trainee both in the lighting and camera department on a feature film called Gums and Noses. I worked my way up on different projects over the years, from being a loader, then first assistant camera to camera operator and now an award-winning director of photography. I’m grateful that my film school has been, and still is, the hours learning on set.

How did you get involved in the production of Lockdown?

I got involved in the production of Lockdown in its first season. I got an invite from BlackBrain Productions to meet with the director and co-owner, Mandla N, just to chat about the production. Let’s just say, I walked in for a chat and like my agent put it… “That carrot was dangled proper.” The story got me and I couldn’t resist. I was sold. I walked out of there wanting to shoot this series badly!

What excites you most about working on this project?

What excites me the most about Lockdown is the story, the characters and the fact that it is a South African original series. Lockdown has the most talented cast and crew – and five seasons later that still gets me, a lot!

Tell us about the approach you took when shooting Lockdown season five and why?

When I learned that the show was moving from Mzansi to Showmax, I thought that this was a great opportunity to change things up a little. I decided to change cameras from Arri Amiras to Arri Minis. I also decided to go for glass with higher contrast than the previous seasons, motivated by the storyline getting darker with every season. Lockdown season five was lensed on Panavision Primo Primes.

What was the most challenging part of the shoot for you?

The most challenging thing about Lockdown season five was the limited amount of prep and shooting time we had. I am a true believer in fixing it in prep and not in post.

As a sought-after, award-winning black female cinematographer in South Africa, how do you keep succeeding in a particularly male-dominated industry?

My hard work, determination and hunger to create amazing pictures and tell good narratives are what keep me going and succeeding in this male-dominated industry. Cinematography is my life! I love everything about it. The combination of a great script with a talented director, cast and crew is my absolute best. It keeps my passion in check and wanting to strive more with each project.

What would you say makes a great cinematographer?

I think cinematography is about collaborating. As the DoP, you need to understand the director’s vision and work closely with the other departments to make that vision come true. So, a great cine is a leader and a collaborator at the same time. Being a good listener is a cherry on top!

What advice would you give to young female DoPs wanting to succeed in this industry?

When I first started, it was completely unheard of to be a black female in the camera department and, in fact, I was discouraged by many folks who said I wouldn’t make it far. I guess the nature of the profession is male-dominated and it can be very physical and mentally challenging, but I believe that one’s gender cannot determine one’s talent. So my advice to aspiring female cinematographers is to never give up! Don’t let anyone tell you that you can’t do it. Also take the time to learn and pay your dues… and most importantly keep those cameras rolling!

What next for Gaopie Kabe?

I’m currently in prep for my first international drama series. I am pretty excited for this one. I can’t talk too much about it, but I am putting my all into it… like with every production I do.

What was your gear list for Lockdown season five?

I think you’d need a double spreadsheet for my gear to fit on a list… But I’d like to take this opportunity to thank the guys at Panavision Johannesburg for coming through for the girl and making all of this season possible!