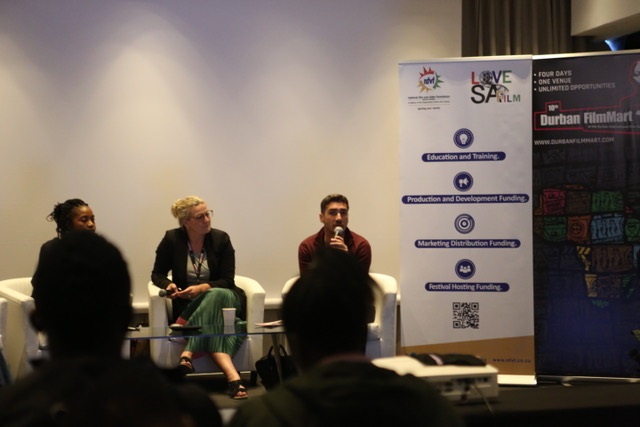 In an exciting development for African producers, a long-hinted-at collaboration is finally official.

Realness founders and film producers Elias Ribeiro and Bongiwe Selane teased the announcement during the Realness Residency that took place recently at Cannes, but it is now confirmed that Realness Institute, EAVE and the International Film Festival Rotterdam are further partnering with the Sundance Institute to create the Creative Producers Indaba, a professional training programme designed to support emerging African producers on a global stage.

The confirmation of the partnership with the Sundance Institute, which took place at the Durban FilmMart in July, means that North American professionals and networks will now be included in this global professional training and development initiative.

The Creative Producers Indaba will bring together 15 participants to develop the capacity of producers on the continent and to create a global network of producing talent with the ability to bring African projects to the international market, as well as to grow local African creative economies.

Realness Institute has recognised that, despite the recent global festival success and accolades for a number of creative and innovative films by African filmmakers, there is a need for support, specifically when it comes to development financing, infrastructure, distribution and marketing.

Realness is aimed at empowering producers across these various skill-sets not just to see a film through production, but also to become active developers of their local creative economies as both practitioners, policy activists and leaders within their fields.

Unlike many other short-term interventions and workshops, Realness participants work together for a full year in order to emerge as strategic-thinking professionals capable of enabling the entire creative economies of their regions.

As a producer-centric programme, Realness aims for more than simply packaging productions for the international market – although all participants will develop a thorough and marketable package ready to take to market.

Participants will attend a variety of workshops over the year-long period focused on script development, packaging, finance, distribution and ultimately pitching to the marketplace. With sessions led by industry professionals from across Africa, Europe and now North America, participants have an unparalleled opportunity to learn and engage with the global film community.

Realness has a collaborative approach that has successfully created global partnerships with key European institutions such as the International Film Festival Rotterdam and EAVE, the

European Audiovisual Entrepreneurs initiative, a well-established training programme that has been in existence for over 30 years.

The inclusion of the Sundance Institute as a Realness partner brings a number of obvious benefits to the project. The stamp of approval that such a partnership conveys will assist Realness as it continues to secure funding for its various programmes. As an African-based organisation in the film industry, funding is always a challenge, and the inclusion of these new partners will hopefully lead to increased funding opportunities and exposure for the project and its graduates.

Organisations such as Realness, as well as filmmakers themselves, often have to look to the global north, and primarily to Europe, for funding, an ultimately unsustainable approach. Projects like the Creative Producers Indaba will hopefully lead to a more independently sustainable African creative film economy.

Realness’ Elias Ribeiro explains further: “It is our intention to form leaders, producers, activists, who can go back home and engage with local government and institutions, lobbying for better policies for the audiovisual industry as well as implementation of new financial instruments which will enable international and Pan-African cooperation.”

Realness also confirmed that the first call for submissions is expected to be made in October, with a build-up to the first workshop in Kenya in September 2020, followed by a second workshop to take place at the Rotterdam Film Festival in January 2021.