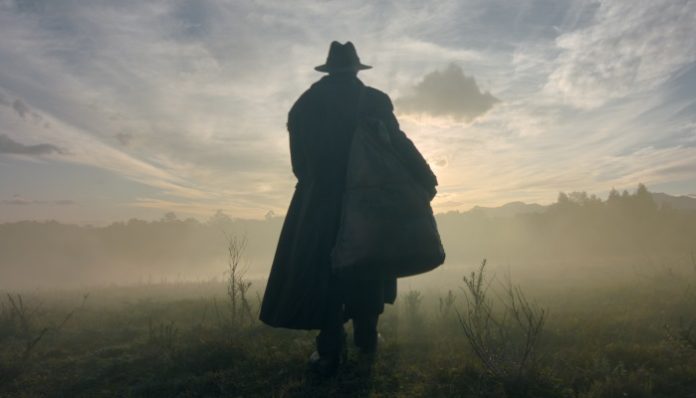 Despite having only just completed their second feature, the team at Man Makes a Picture is already quickly rising to stardom. Their first film, The Recce, won best foreign feature at the Idyllwild Film Festival in California in March and a Silver Remi at the Worldfest in Houston in April. Now their second film, 8, has been taken to market at Cannes after being signed by LA-based sales agent, Rock Salt Releasing.

Playing on African folklore and mythology, 8 has been described as horrific on a primordial level: it portrays what happens when an old man, fated to collect souls for eternity, seeks atonement after trading his daughter’s soul. The film stars award-winning actor Tsamano Sebe (Of Good Report), Igne Beckmann (Escape Room), Garth Breytenbach (Troy: Fall of a City) and upcoming star, Keita Luna.

To find out more, we caught up with the team behind the film about everything from why they chose the horror genre to the way they designed the cinematography, sound and post on an indie budget.

What made this project – 8 – important to the team at Man Makes a Picture?

Jac Williams, producer: The director, Harold Hölscher, and I have been developing this project for the last two years. It’s a proper South African horror story – a period piece that takes place in the late-70s. We liked the script and the whole Man Makes a Picture team was very excited to jump on this project. The horror genre seemed like a good route as we were looking for a project that would be quicker to distribute internationally than The Recce – an Afrikaans film that is much more difficult sell abroad.  I think we made the right choice seeing that we recently signed a world-wide sales deal with a company in Los Angles and attended The Cannes film market with them in May.

What cameras did you use on the film?

Jacques van Tonder, technical producer: We worked with BMD URSA Mini 4.6Ks on The Recce and, as far I was concerned, they were battle-tested in terms of reliability. We were very pleased with their performance then, and our opinion was validated with a nomination at the Cameraimage Film festival in Poland in the best Cinematography in a Debut Feature Category.

Budget is always a concern on independent projects, and with the BMD being really cost-efficient, we were able to have two camera bodies shooting multicam scenes, as well as have a gimbal pre-rigged at times or have a splinter unit to go out and pick up shots. The 4.6K resolution also gave our VFX team good resolution to work with. Considering it is a totally independently-funded film, we had to keep all options on the table for possible distribution and the camera being on the Netflix-approved list was a big selling-point. Through our experience we knew that shooting RAW would give us a lot of flexibility in the grade. These cameras really provide excellent value for money.

Dave Pienaar, director of photography: In the end, the Blackmagic cameras made sense. Two cameras gave security as the shoot was far away from any backup rental house. It was handy to have a second body available for gimbal and second-angle setups. I’m not really a fan of shooting two cameras on character-driven scenes, as I feel the lighting and composition suffer, but on more technical scenes it definitely helped. I felt they handled the shoot well and was quite pleased with the cinematic quality they lent to the picture.

What lenses and rigs did you use on the cameras? What effect did this bring to the final cinematography?

Pienaar: We used the new Sigma Cine range of lenses, which actually complemented the Blackmagic cameras really well. I was worried about the combination of a digital camera and super-sharp lenses. But they somehow seemed nice and organic on the Blackmagic. The lenses have a great range of focal lengths and are nice and fast, which helped with the night scenes. I was able to shoot them pretty close to wide open, and they still kept it together. I quite like to fog the lens a little, as I feel it takes the edge off the super-clean modern lens and adds an emotive, organic quality to the picture.

I also used a long ARRI Alura Zoom which was a lot of fun. Originally I thought it was going to be more of a technical lens instead of a storytelling lens, but I loved using its slow, creeping zooms to build tension.

Could you describe the shooting style that you opted for?

Pienaar: We went with a more classic operating style on this film. Tripod and slider most of the shoot. I felt the ‘grounded’ feel of the camera with long, eerie shots added to the suspense. A gimbal was used on some shots to move the camera without it looking too handheld. I really loved shooting the more intimate character-driven scenes with just one or two characters, as opposed to the larger, more technical scenes with many characters.

Tell us more about how the cameras were rated, and whether a LUT was used during filming?

Pienaar: We acquired in RAW in the lowest compression to get the best out of the cameras. But, I was terrified of underexposing the dark contrasting night stuff. I rated the cameras 800 ISO on the day scenes and quite often rated them to 200 ISO on the night shots. I felt that as long as I didn’t overexpose the highlights, which is a real danger when shooting at 200 ISO, there would be more information on the rushes as I would effectively be overexposing by two stops.

van Tonder: The cameras in combination with Resolve software make it really easy to create and load LUTs for custom looks straight out of camera. We ended up with a generic shooting LUT that worked for both day and night scenes. On a tight schedule and with a small crew, it was great to be able to customise the look without additional crew or equipment apart from our DIT setup.

What was the approach to lighting and audio?

Pienaar: I had a lot of fun on this film. I almost exclusively shoot commercials and so quite often feel restricted by client and agency on a commercial job. It was liberating to be able to light it the way I wanted to. Toby Smuts, the gaffer, was great at coming up with suggestions and had an amazing wireless LED DMX system which was a treat on a budget-restricted shoot like this. I loved shooting the Shed Night Interior scenes.

Adriaan Drotsch, sound recordist and audio post supervisor: It was an absolute honour to work on my very first horror film, as sound plays such an important role in this genre. We recorded on a Zaxcom Nomad 10 and used a Zaxcom ZMT3 wireless kit with Sanken cos11-D microphones. The Zaxcom kit comes with a never-clip function, which literally means you can’t overdrive the input. Never-clip helped us to get around tricky scenes where a performer is whispering and then, all of a sudden, goes into a frantic scream.

For the on-boom microphone we went with a more vintage feel – a Sennheiser Mkh416, a Sennheiser Mkh816 and, for all the inside scenes, the trusty Sennheiser Mkh50. The biggest challenge on the production was to minimise post-ADR recording and trying to get as much on location as possible while the whole of the crew spent 24 hours a day on location.

The real fun started in post: we played around with awesome ideas to see which one will give the biggest fright, while still keeping you interested for more. The director was very involved and had specific ideas about what the caricatures needed to sound like.

The awesome team from Sound and Motion Studios really intensified the film through sound and did a brilliant job creating it.

van Tonder: We started our post process with a DaVinci Resolve-based lab for dailies and offline processing. We had daily rushes viewing in the lab. It is a great combination, working with the URSA Minis and Resolve. With our setup, we could view rushes in the native RAW format with LUT applied and retain full image quality while working on looks. Our editor could then begin assembly and QC within a few hours of the scene being shot.

Jacques le Roux, editor & Harold Hölscher, director: Editing was done in Premiere Pro with the camera originals being transcoded to ProRes proxy at HD resolution. We spent a lot of time shaping the performances so that the characters were believable, and ensured we always got the pacing and suspense just right. Next, we removed redundant scenes or parts of scenes: sometimes what works great in the script is not necessarily reflected on screen. We wanted to keep the suspense and horror elements as real as possible, so we did most of the effects techniques in-camera, with minimal SFX in mind. We had to focus more on classical cutting to convey emotion and fear. The style of the film is very romantic and old school, so the editing and post production had to keep that style intact.