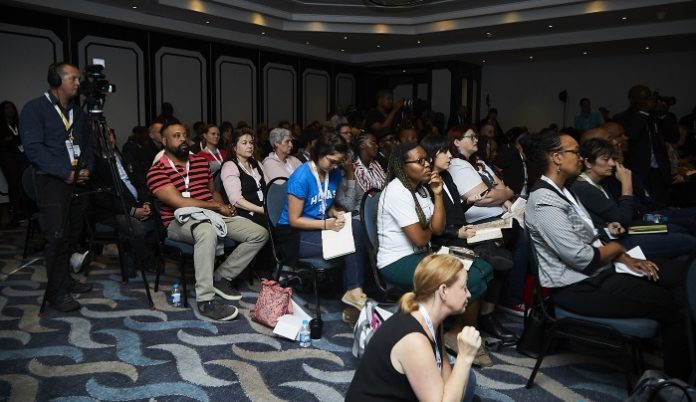 Engage @ DFM, the new Durban FilmMart-curated think tank conversations and panels on the future perspectives of the African film industry announced a series of partnerships with other stakeholders that have convergent and vested interests in the continent’s screen sector. Spearheaded by industry programmers Themba Bhebhe, Tiny Mungwe, Russel Hlongwane and Mitchell Harper, the 3-day programme, which ran from 20-22 July, comprised closed-rank, moderated think tank discussions in the form of round tables in the mornings, followed by public-facing panels in the afternoons. The solution-driven conversations were articulated around three foci: Towards a de-colonial model for filmmaking and film; How can key African platforms work together create pan-African collaborations to grow cinema?; Strategies for growing documentary filmmaking and documentary audiences in Africa. Designed as spaces for the sharing and production of knowledge, these discussions were documented and their findings subsequently redacted into a report.

Through these strategic partnerships where all three partners actively partake in the conversations forming Engage @ DFM discursively, Awotélé will provide exclusive editorial coverage and a platform which will share the future reports, the Journées Cinématographiques de Carthage (Carthage Film Festival) will host the next edition of talks – Engage @ JCC – at one of the continent’s oldest and well-established festivals, and United Screens will not only document and archive but also exhibit interviews past and present at the DFM, the KZN SA Gallery and the non-profit organization, Art for Humanity, hosted by the Durban University of Technology’s Faculty of Arts & Design.

“We are really pleased that we are able to grow the African industry network through the Engage @DFM programme,” says Toni Monty, Head of the Durban FilmMart. “It is fitting in our 10th edition that these partnerships have been forged, and we look forward to building the network across Africa, through further Engage conversations.”

“Awotélé is also committed to pursuing similar conversations as those that are at the centre of the think tank conversations which is why we are pleased to partner with Engage @ DFM,” enthused Claire Diao, film critic and co-founder of Awotélé.

“Being the first established international film festival in the continent, the JCC’s mission has historically been to actively showcase and promote African and Arab cinemas and their talents, thus having a kinship with DIFF. Bringing together the northernmost and southernmost festivals in Africa follows the same spirit of stimulating and strengthening South-South collaborations, and allows us to think together on the future development perspectives of the industry,” stated Nejib Ayed, JCC General Director.

“DIFF and the JCC-Carthage Film Festival are two major, unmissable and complementary festivals with unparalleled industry platforms. This promising collaboration between Carthage Pro and Durban FilmMart will offer increased networking opportunities for film projects holders, and will bridge the gap between English, Arab and French speaking countries in Africa,” said Lamia Belkaïd Guiga, JCC General Delegate and Artistic Director, who, alongside her colleague Samia Labidi, travelled to Durban for the occasion.

“Carthage Pro and Durban FilmMart are linking their complementary platforms to reflect on cinema and also boost the local and regional industries. This collaboration will start at the 10th DIFF where the JCC will award a DFM project in development with an invitation to participate in CHABAKA workshop and pitching competition. The conversation of Engage @ DFM on the realities and challenges of documentary filmmaking will continue at the JCC 2019,” promised Samia Labidi, Carthage Pro Projects Development.

“Starting with Engage @ DFM, we are looking forward to walking with Engage, in their journey to bring together pan-African film practitioners in the face of vulnerable conditions in the film ecosystem on the continent,” said Abhishek Nilamber, curator. “We as UNITED SCREENS resonate with their passion and rigour to create and connect spaces for conversation, re-imagination and strategies for creating and screening cinema,” continued Laura Kloeckner, co-curator.