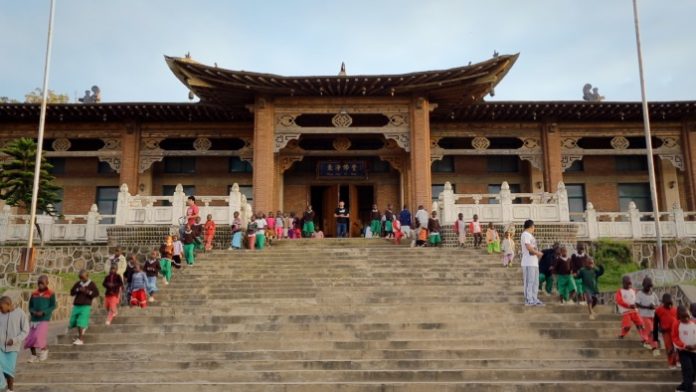 Buddha in Africa, directed by KwaZulu-Natal-based filmmaker, Nicole Schafer, has been selected in the International Documentary Competition at the 40th Durban International Film Festival (18 to 28 July) for the second leg of its South African premiere.

This delicately observed documentary about a Malawian teenager caught between his African roots and Chinese upbringing; was chosen as the Opening Night feature for the Encounters Documentary Festival in Cape Town and Johannesburg where it also received a Backsberg Encounters Audience Award. The film had its World Premiere at the prestigious Hot Docs Canadian International Festival in April and the Sydney International Film Festival in June with several more local and international festivals lined up for this year.

The film follows the intimate story of Enock Alu, a Malawian teenager growing up in a Chinese Buddhist orphanage in Africa. Once the star performer with dreams of becoming a martial arts hero like Jet Li, Enock, in his final year of school, has to make some tough decisions about his future. Will he return to his relatives in his home village or study abroad in Taiwan? Set against China’s expanding influence on the continent, Buddha in Africa provides a unique insight into the impact of cultural soft power on the identity and imagination of a young boy and his community.

“Most of the focus of Chinese involvement in Africa has been on the economic impact, whereas this story shows the influence of Chinese culture,” says writer and director Nicole Schafer. “For so long Africa has been influenced by Western culture and economic systems. I was struck by how this orphanage is strangely reminiscent of the Christian missions during the colonial era, only here African children have Chinese names and instead of learning about the West, they are learning about Chinese culture and history. I feel that the orphanage is the perfect metaphor to explore not only the impact of Chinese involvement in Africa, but also as a mirror for the legacy of Western colonialism on the African continent.”

Enock Alu (16) is one of three hundred orphans from rural Malawi growing up in a charity-based NGO founded by a Buddhist monk from Taiwan. It is one of several similar institutions around Southern Africa aimed at using Chinese culture and Buddhism to uplift the lives of orphans in Africa.

Filmed over five years, this essential film provides a valuable insight into some of the challenges affecting vulnerable children in Sub-Saharan Africa and poses complex questions around culture, identity, imperialism and the impact of foreign development aid.

“I feel Enock’s internal conflict of trying to hold onto his own culture and then the sacrifices that come with embracing the opportunities afforded by Chinese engagement in many ways reflects the dilemma around the future development of the African continent. How does Africa move forward and participate within an increasingly globalised world without becoming victim to yet another system of economic and cultural domination?”

Schafer goes on to say, “There are big differences between Western and Eastern perspectives and we worked hard to balance the African and Chinese points of view in the film. I have been interested in how different audiences have responded to the film. International audiences seem to be more interested in the political context, while locally, in South Africa, audiences have been deeply moved by Enock’s personal story.  As a filmmaker, I have chosen to document his story, and am pleased it is providing a diverse global audience the opportunity to examine the complex and layered world in which we Africans find ourselves.”

The film is an international co-production between Thinking Strings Media based in the KZN Midlands in South Africa, and Momento Film in Sweden. Renowned Paris-based company CAT & Docs will be representing the film internationally. AfriDocs is the African broadcast partner.

The project received the IDFA Most Promising Documentary Award when it was first pitched at the Durban FilmMart in 2011 and has since been awarded funding from several international funds including the IDFA Bertha Europe Fund in the Netherlands, Hot Docs-Blue Ice Group Doc Fund and the Alter Cine Foundation in Canada, Chicken & Egg Pictures in New York, the South African National Film and Video Foundation and the KwaZulu-Natal Film Commission.

The film premieres at DIFF on Saturday, July 20 at 16h00 at Musgrave Ster-kinekor, and has a second screening at Suncoast Cine Centre on Thursday, July 25 at 18h30.