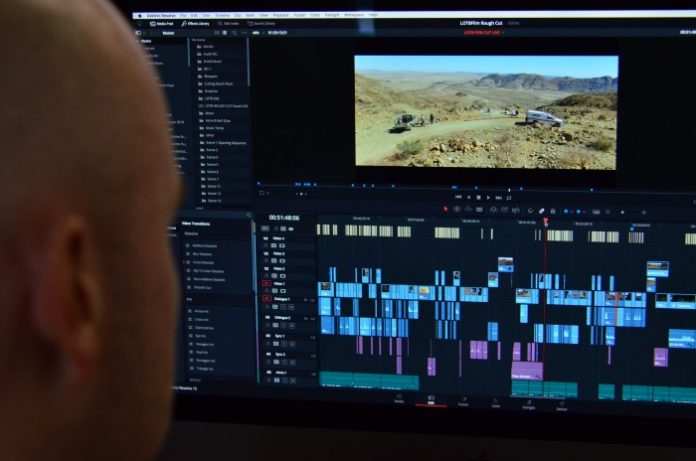 Haiko Boldt is a freelance video editor and graphic designer currently living in Namibia, who worked as editor and cinematographer on #LANDoftheBRAVEfilm. He has received a Namibian Film Award for his editing work and is the owner of Thunderboldt Design & Post Production.

#LANDoftheBRAVEfilm, produced in Nambia, traces the journey of policewoman Meisie Willemse: a tough cop with an illustrious career, who hides a dodgy past. As she solves one the biggest cases of her career, she is forced to face herself; the closer she gets to catching the killer, the more the dark secrets of her past are revealed, ultimately derailing her life.

Screen Africa chatted to Haiko about the interesting story, the equipment used to capture the epic Namibian landscapes and the need to “kill your darlings” in the editing room…

How did you first become involved in working on the film?

My involvement came about through the director, Tim Huebschle, and producer David Benade. We had worked together on short films and various other projects over the years. I was given the opportunity to read one of the early drafts of the script and I enjoyed the story immensely. It is a local story, which I hoped would turn into a local production and would give me the chance to stretch my creative muscles as an editor. Initially, my involvement was only meant to be editor of the film, but during the pre-production phase Tim and David approached me and asked if I would also like do the cinematography for the film, as well. This was an amazing opportunity and daunting, as well, but of course I accepted.

The teasers all look amazing – especially the wide-angle shots. What cameras and lens set-ups were used on the film?

The early teasers were filmed on a Canon 60D with the 18-135mm kit lens. Some of the aerials were done with the Phantom 2 and later with the DJI Inspire One. For principal photography, we used the Sony A7s II with a Metabones adaptor and Canon lenses (EF 16-35mm, EF 24-105mm and the EF 100-400mm), as well as a Sigma Macro lens. We recorded onto the Blackmagic Design 4K Video Assist from the Sony A7s II HDMI out to be able to capture in 4K (UHD) and Apple ProRes HQ 422.

The director’s monitor on set was an identical 4K Video Assist. In the beginning of the production, the director’s monitor would get its feed via SDI cable. We did have a wireless video transmission option but could not use it because it only worked with HD and we were shooting in UHD. A bit into the production, however, I found a new solution after the launch of a few products from Blackmagic Design. Among these was the Mini Converter SDI to HDMI 4K. This was used to down-convert the UHD to HD and to connect the wireless video transmitter. Luckily, the device is small and compact and did not add too much weight to the camera rig. The whole setup was powered from a V-Mount battery plate system via 12V and D-Tap cables to the devices. Aerials were filmed with the DJI Inspire One and the DJI Ronin MX gimbal was used for the motion shots.

Can you talk us through your choice to complete full picture post in Resolve? What advantages did this bring?

Working on other projects, we had gotten into a bit of a workflow issue between FCP X and the export and import of the audio through third-party software for audio post.

I always assumed that the colour grade was going to happen in DaVinci Resolve, which led us to decide to choose Resolve for editing as well. Because of the free version, we could install DaVinci Resolve, give it a try and see if it would be the right fit. The advantages were clearly the fact that the entire workflow happens within one ecosystem. It is so easy to switch from edit to audio to colour workflow with a click of the mouse. This became evident when, during the rough cut of the film, the sound designer would come in over the weekends and clean up the audio for the past week’s rough cut. This meant that by the time we had a first full rough cut, we had clean audio, too.

Recording on the 4K video assist in ProRes HQ, which is optimised for DaVinci Resolve, also meant no transcoding. It was liberating, as we edited in full resolution – and so what we saw on screen was what we would get out, and it didn’t slow down the computer.

What was your Resolve setup, including panels, hardware, monitoring and more?

The studio setup consisted of an entry-level iMac Pro running DaVinci Resolve and a 16TB G-Tech Raid Drive for the media. Connected to this was a 4K Ultra Studio. We opted for a BenQ SW271 monitor and the Blackmagic Design Micro Panel for the colour grading. During editing, the audio was taken out of the 4K studio and sent into a small mixer and out to two Yamaha speakers. We also had a big screen TV for viewing in studio.

Can you describe the brief for the edit? What were you trying to achieve with it?

The brief was to forget what I had seen on location, and craft the edit from the footage that was there. The director and I started to make editing decisions as early on as the storyboarding stage. The edit was quite predetermined in a way, as we had created an extensive storyboard with more than 700 boards. We spent about five weeks on it and had already made decisions on shot sizes and angles, and had specified the shots we would use for specific parts of the dialogue. This helped us immensely on set, but also set the tone for the edit.

The story is really interesting – and the female lead, too. Did you face challenges in telling her story through your work?

‘To kill your darlings’, like the director said, was and is probably always a challenge. We all loved some shots for whatever reason, but for the greater good of the story, some of them didn’t fit or just felt a bit ‘out.’ Letting go of shots like these can only make the film better.

Do you have a favourite scene or sequence? Can you tell us why, and give us an insight into the workflow behind creating it?

In #LANDoftheBRAVEfilm, my favourites are the shots that involved small edit decisions. Omitting certain parts of the story, or even just seconds of footage – small decisions that ultimately strengthened the film. Always remember that sometimes the things you don’t say also have an impact. For a specific example, I really like one of the city skyline shots. We kept the bottom of the shot at normal speed and sped up the top part to get some movement into the clouds, to create the effect that time was passing.