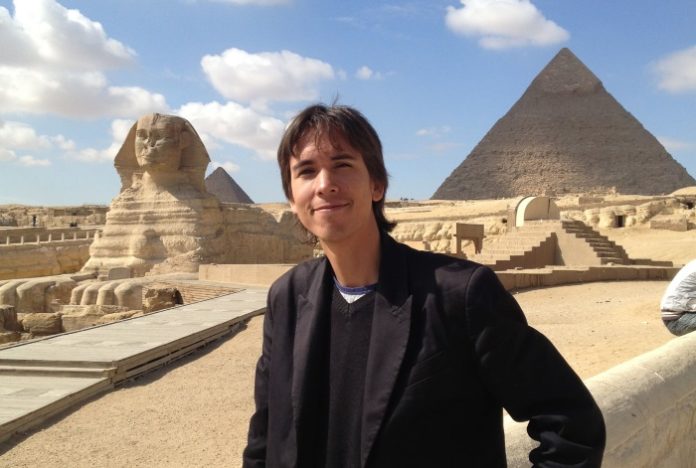 WHAT IS YOUR BACKGROUND AND HOW HAS THIS SHAPED YOU AS A DIRECTOR?

Growing up in the transition era has made me an optimist and a believer in people. As a director, I like to be collaborative and to challenge my teams to come up with creative solutions on both the art and technical sides of our films. So far, they’ve only fuelled my belief!

In his book Starting Point, Hayao Miyazaki describes all animators as being nostalgic for a world that doesn’t exist, which really resonates with me. Plan-wise: I’ve always drawn, made little comics, films and video games, and when I was looking at what to study, I became really jealous of my friend when he told me he was going to do animation… so I followed the envy.

APART FROM ANIMATION, WHAT KIND OF CONTENT DO YOU ENJOY CREATING?

My wife, Julia, and I are working on a kid’s book together. It’s about a young boy trying to figure out how to be a ‘manly-man.’

YOU RECENTLY DIRECTED ZOG – BASED ON THE BESTSELLING JULIA DONALDSON AND AXEL SCHEFFLER PICTURE BOOK – WHAT WAS THAT PROCESS LIKE? WHAT DREW YOU TO THIS STORY?

Directing Zog was great fun, and surprisingly straightforward for Max (Lang) and myself. We are both story-board artists and managed to get a first pass of the film out in a couple of weeks, and then just built on that with the team, iteration by iteration.

At the heart of the book, there is a lovely and surprising relationship between the dragon and the girl, which I found charming. It also has a great message about being true to yourself in the face of the expectations of others, which I think is a great take-away for kids and adults alike.

WHAT ELEMENTS ARE CRUCIAL IN DEVELOPING A SUCCESSFUL ANIMATED FILM/SERIES FOR YOUNGER VIEWERS?

Young audiences can be quite brutal, and can smell condescension or someone who thinks they’re funny a mile away. To get something to connect, you need to be just as brutal with your film, and if the story is unclear, a joke isn’t getting a laugh or an emotional moment isn’t landing, you need to fix it.

HOW HAS THE LANDSCAPE CHANGED IN THE AFRICAN ANIMATION INDUSTRY OVER THE PAST FIVE YEARS?

Africa is currently being looked to as a source of inspiration. It’s still hard to do things in Africa, but we finally have the ear of the big studios and networks – and they want to see what our animation studios can do.

WHY DO YOU THINK AFRICAN ANIMATION IS CURRENTLY BOOMING AND TRAVELLING LIKE IT IS? WHAT DO YOU ATTRIBUTE THIS SUCCESS TO?

The current interest in African animation has been fuelled by a thirst for unique stories and voices. Whether this turns into a genuine boom or not will depend on us and whether we can create characters and stories that connect with world audiences.

AS THE FOUNDING DIRECTOR OF THE CTIAF, HOW DID YOU FIND THIS YEAR’S EVENT?

I was completely blown away! The quality of the talks, the meetings and conversations was world-class. Di and her team did an amazing job.

WHAT IS THE IMPORTANCE OF EVENTS LIKE THE CTIAF TO THE AFRICAN ANIMATION INDUSTRY?

It connects us to the world and to each other and that, alone, makes it super important. We’re a collaborative medium; we can’t really thrive in isolation.

Watching Zog with my nine-month-old, my wife and our parents at the UK premiere was pretty special.

Young people! Listen to me!!! Figure out what you WANT, and then figure out how to get it! Otherwise other people will tell you what they want from you, and you’ll spend your life giving it to them (because they have all the money).

WHAT NEXT FOR DANIEL SNADDON AS A DIRECTOR?

I’m currently directing another Christmas special for Magic Light Pictures and the BBC, based on Julia Donaldson and Axel Scheffler’s book, The Snail and the Whale. I’m also developing the feature film Kariba with Triggerfish, based on the graphic novel by Daniel and James Clarke.