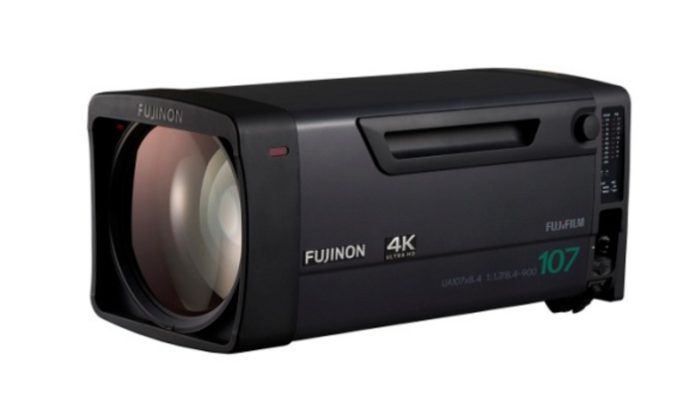 At NAB Show 2019, taking place from 6 to 11 April in Las Vegas, FUJIFILM Corporation highlights its cutting-edge optical technologies used in its wide range of zoom lenses, including for 4K and 8K broadcast, the use of which has been rising at a very rapid pace. The company also gives emphasis to its revamped lineup of cinema lenses that have received accolades among industry professionals, including an Emmy Award.

FUJIFILM will showcase the 8K lens series and the UA Series of broadcast lenses, which support 4K cameras equipped with a 2/3-inch sensor. On show will include the FUJINON UA46×9.5 portable 4K zoom lens for broadcast application equipped with a 46× zoom, the world’s highest*1 magnification broadcast portable lens for 4K video production, and the FUJINON UA107×8.4 zoom lens, which features an incredible 107× zoom, and is optimal for shooting various scenes, such as sports and concerts. Visitors to the FUJIFILM booth at NAB Show 2019 can watch dynamic 4K videos made with the latest FUJINON lenses.

FUJIFILM also premieres the FUJINON UA125×8 4Kcompatible box-type broadcast zoom lens that is under development with the world’s highest zoom ratio of 125×*2. The FUJINON UA125×8 covers a wide range of focal lengths from 8mm in wide angle to 1,000mm in telephoto (2,000mm with the built-in Extender). It is a multi-purpose high-power zoom lens that can be used in diverse situations, including live broadcasts of sporting events and concerts.

In the UA Series 2/3-inch 4K portable lenses for broadcast application that are presently under development, FUJIFILM showcases two new models: the FUJINON UA18×7.6 and the FUJINON UA23×7.6. They are light and compact and have high mobility required for shoulder-type lenses and excellent optical performance needed for 4K.

FUJIFILM pushes forward with the development of these models to expand the FUJINON 4K lens lineup to total of 14 models.

FUJIFILM also features at its NAB Show 2019 booth the Premista 28- 100mmT2.9, the standard zoom lens of the new Premista Series that the company announced on 3 April 2019. The Premista 28-100mmT2.9 is a zoom lens for high-performance cinema cameras and supports a large-format sensor. It covers focal lengths of 28 to 100mm. By combining a large-aperture aspherical lens and the newly developed focus/zoom system, the Premista 28-100mmT2.9 has achieved high optical performance from the center to the edges of the screen, thereby fully unleashing the capacity of the sensor. In addition, a mockup of the Premista 80- 250mmT2.9-3.5, which covers focal lengths of 80 to 250mm, is also on display. A rich lineup of cinema lenses also include the HK Series flagship model, which supports super 35mm sensors; the ZK Series and XK Series, which have earned high acclaim for their high optical performance and operation with a detachable drive unit; and the MK Series, which has achieved high optical performance, in a compact and lightweight body that is less than 1kg, with excellent cost performance.

FUJIFILM also highlights at this year’s event the FUJIFILM X-T3 digital camera, the first in the X Series to support 4K/60P 4:2:2 10bit high-definition multimedia interface (HDMI) output and 4K/60P 4:2:0 10bit recording on SD card in the camera, as well as the GFX Series medium-format mirrorless digital camera equipped with a large sensor. FUJIFILM X-T3 features important modes, such as ETERNA mode, which reproduces colours and grayscales of FUJIFILM cinematographic films; FLog, which allows video expressions with high degree of freedom; and Film Simulation modes, which realise diverse hues. In addition, FUJIFILM also displays the FUJIFILM GFX100Megapixels, which is equipped with an image sensor with 102 million pixels and an image stabilising mechanism in the body. The company announced the development of the FUJIFILM GFX100Megapixels in September 2018.

Equipped with the world’s first*3 folded two-axial rotatable lens, the Z5000 (FP-5000) FUJIFILM PROJECTOR is capable of projecting images in various directions simply through the rotation of the lens without having to move the main unit. The FP-Z5000 hits the market in April 2019. In addition, the FP-Z5000 is an innovative projector which is able to be set up in places where a conventional projector could not be placed due to space constraints, and throw powerful images in directions that conventional projectors cannot handle.

1. World’s highest magnification zoom for 4K broadcast portable zoom lens. Based on public information as of 27 March 2019, according to FUJIFILM research.

2. World’s highest magnification zoom for box-type 4K broadcast zoom lens. Based on public information as of 27 March 2019, according to FUJIFILM research.