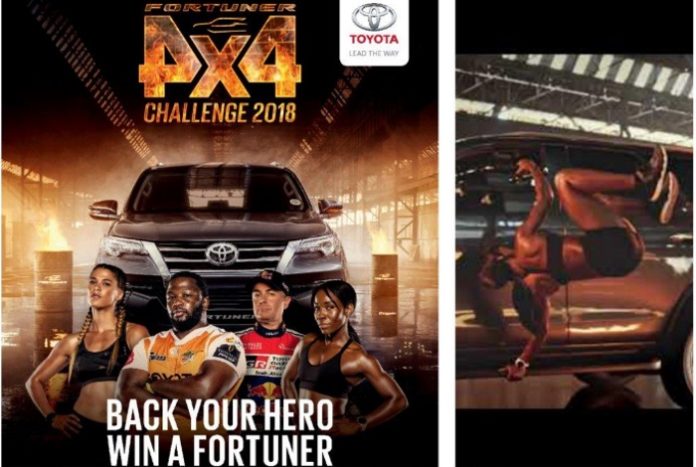 Toyota South Africa is running its Fortuner 4×4 Challenge this Spring, making it a hat trick for the successful competition which pairs four professional athletes with four Toyota fans as the teams battle it out in a bid to drive home in a brand new Fortuner 4×4.

Driving participation in this year’s three-month activation is a 360° campaign created by FCB Joburg comprising four, 15-second television spots for each of this year’s four heroes in which they demonstrate their unique skills. There is also one 40-second spot featuring all four, and cinema, radio, outdoor, print, social and digital media complete the campaign.

The brief put to creative director Tian Van Den Heever, art director Julie Thorogood and copywriter Este De Beer by senior advertising manager at Toyota SA, Tasneem Lorgat, was simple: Make it bigger and better so as to build on the successes of the 2016 and 2017 Fortuner 4×4 Challenges.

“The prize for winning the Toyota Fortuner 4×4 Challenge is huge – a Fortuner! So, the Toyota fans who are selected to take on the challenge know they’ll have to work really hard. It’s a physically-challenging, two-day struggle to eventually claim the title and become the owner of a brand new Fortuner. We wanted the communication to demonstrate the enormity of the task, but do so in a way that inspires participation,” she said.

The campaign runs from August to October. TV spots can be viewed at these links:

To amplify the Challenge which takes place in October, the Toyota community also stand a chance to win a second Fortuner 4×4 by backing their favourite hero. This can be done by using one of the four hero hashtags (#OX4X4, #STEFFI4X4, #GINIEL4X4 or #MAPULE4X4) to comment on any of the official social posts on Facebook, Twitter and Instagram. ‘Back Your Hero’ entries can also be done via the competition website or by dialing the USSD string (*120*62800#).