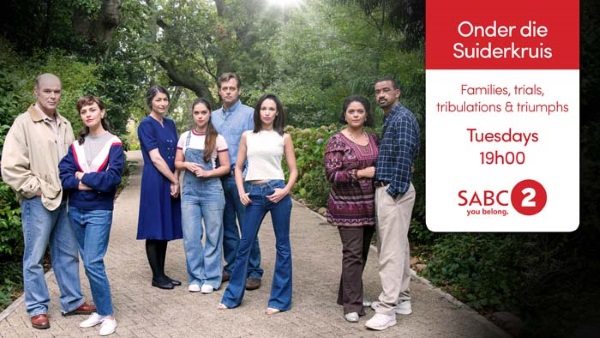 The life of an entrepreneur requires resilience, competitiveness and consistency. From owning a modest school tuck shop, to running a successful chain of varsity takeaways, to being a billionaire farmer and mine owner – Onder Die Suiderkruis explores the experience of being your own boss through the lens of three families.

“I wanted to explore the influence of parents, environment, school, history, fate, etc. on determining the personality of the child, and also what qualities do you need to tempt fate to become an entrepreneur and be your own boss,” comments writer and producer of the show, Johan van Jaarsveldt. While the show is not an educational programme, van Jaarsveldt says that valuable insight can be gleaned from the exchanges between characters.

Set in the 80s and 90s, the series boasts a talented local cast featuring Alyzzander Fourie, Anton Dekker, Michelle Burger, Christia Visser and Tinarie van Wyk-Loot. Casting was handled by van Jaarsveldt and director Elizabeth Archer. “In most cases, we agreed on whom we would like to use in the roles. In only two instances we could not get the original choice, due to unavailability of the actors. This is where fate stepped in and provided us with the best candidates for the parts. We only auditioned/interviewed three actors, purely because we did not know them. In all the other parts we cast major actors, with outstanding results,” says Archer.

The storyline centres on three prominent families, namely, the Tredouxs, the Smithymans and the Normingtons.

The Tredoux family are a traditional Afrikaans family from a small Boland town. The family is headed by a controlling conservative father, a subservient mother and their two offspring, Stephen Tredoux and his younger sister Jane. In their entrepreneurship journey, Stephen embraces the concept of selling to a willing market from an early age, while Jane absolutely detests it and rebels against it. The Tredoux family’s Oupa (grandfather) is the voice of reason and a true freethinking liberal.

The Smithymans, on the other hand, are a wealthy small family, living in isolation on a Karoo Farm. The family is made up of a billionaire farmer and mine owner, and his only daughter. The single father enlists the help of private tutors and governesses to maintain his household. Only the best is good enough for his daughter, who is intellectually above her peers and manages to secure a place at Cambridge University before the age of sixteen.

The final household is the Normington family from Port Elizabeth. This family includes a carefree saxophonist who is married to a primary school teacher. The two clash nonstop but despite their constant bickering it is evident that they truly love one another. The Normington family grows when they become stepparents to a nephew who glides through school and becomes a top student at the University of Witwatersrand.

In season one, set it in the early 1980s, viewers meet the main characters as young children and witness the way in which their parents influence their lives during their primary years. As the series progresses the children blossom into teenagers, then young adults, trying to make the most of their lives with the opportunities presented to them.

Onder Die Suiderkruis, was shot on the Canon C300 camera with Zeiss CP2 lenses. “We decided to go for a cinematographic look and feel in a 1:85 format. This allowed us black bands at the top and bottom of the screen as we did not want the obligatory subtitles to intrude in the picture,” Archer expands. “Re-creating the different periods from 1980 to the mid-90s was difficult and asked for authenticity, mainly because a huge percentage of viewers remember those years vividly. For instance, CDs came on the market in the mid-80s. Cellphones arrived in 1994. We are talking about laptops, what people wore then, hairstyles, accessories, transport, furniture, etc. But looking at the end result, all the effort paid off handsomely.”

“There will be elements, incidents and situations portrayed in the show that viewers will recognise and take to heart, but having said that, our main aim remains to intrigue, to amuse, to stimulate and above all, to entertain,” Archer concludes.

Onder Die Suiderkruis is a 13-part series with each episode running for 45 minutes. Viewers have already shown their love for the storyline and characters of the show, on the Onder Die Suiderkruis Facebook page, which reached 1000 followers on 21 June, just ten days after the show first aired on television.

Dean Kotze remarked: Wow! This is absolutely amazing! Well done to all involved…

While Sunel Nomava Zwane commented: I cannot remember the last time I was so excited about a show, first episode left me shaken. Your cast is amazing but, I was blown away by the performance of Christia Visser, what an amazing talent, in one word WOW.”

Onder Die Suiderkruis was shot on the Canon C300 with Zeiss CP2 lenses.