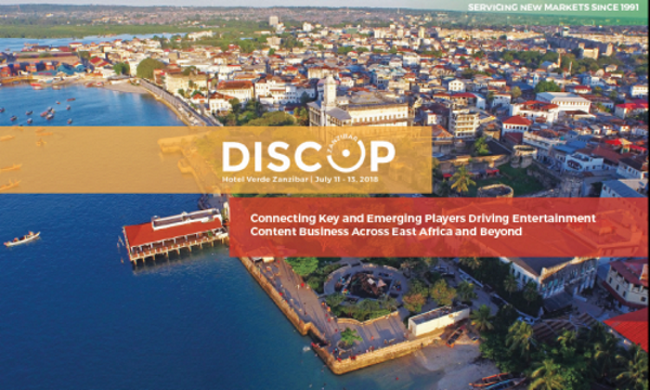 The inaugural DISCOP Zanzibar is set to take place from 11 to 13 July, at the brand new and 100 per cent green VERDE HOTEL, champion of sustainable development and located two kilometres from Stone Town.

Streaming platforms with a strong focus on the African marketplace such as IFLIX, SHOWMAX, IROKO and ARCADIA MOBILE will also be attending the three-day market.

These young creators and entrepreneurs will be invited to take part in the ‘Next Gen’ knowledge-transfer, development and pitching programme. This sidebar programme running alongside the market and open to all participants, will address strategic issues regarding the development of a sustainable audio-visual ecosystem meeting the demands and means of Africa, the world’s fastest growing entertainment and media marketplace.

As part of this programme, The Africa Channel (TAC), will present ‘It’s Time For Africa | Creating & Producing for a Global Market’, a discussion to be moderated by Brendan Gabriel, VP Production & Creative Development, TAC, with a special focus on practical tips tailored for producers who want to sell their content globally.

The ‘Next Gen’ programme will feature three distinct programme tracks respectively focusing on regional co-production opportunities, the growing importance of video gaming content and the strategic value of original music to better accompany video entertainment content across the world.

Additionally, DISCOP Zanzibar will put the spotlight on Ethiopia with a special panel on The History and Future of Ethiopian Media; a journey through the last 30 years of broadcast media in Ethiopia. Experts look at state monopoly on broadcasting and the birth of new radio and TV stations, censorship of the media space, how the internet has changed access to information, the rise of new radio and TV stations and the type of content they are focusing on.

DISCOP Zanzibar has put a special focus on programmes aimed at independent producers, and as part of this focus, The Africa Channel will present a not-to-be-missed panel; It’s Time for Africa – Creating & Producing for a Global Market. Moderated by Brendan Gabriel, VP Production & Creative Development, The Africa Channel, the discussion will focus on advice for producers who want to sell their content into a global market

Women of Influence will also be in the spotlight at DISCOP Zanzibar with a panel discussion in partnership with the Ladima Foundation. The discussion will be an inspiring session on how to achieve influence and share it with the next generation.