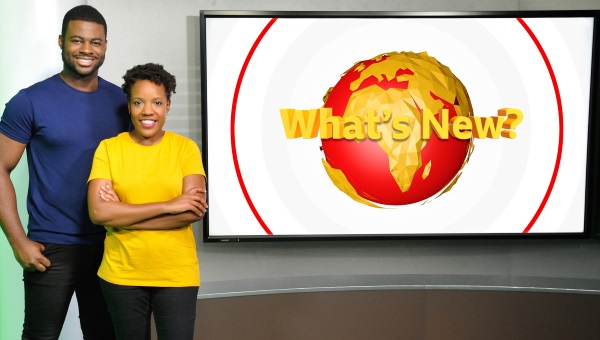 What’s New? is an exciting weekly TV programme on BBC News for young people in Africa which launched on 23 June 2018. Aimed at 11 to 16 year olds, the show is an informative, entertaining and fun programme which will keep young people up to date with what’s happening in the world they live in.

Nisha Kapur, BBC commissioning editor said: “What’s New? is for and about young people across Africa. It gives them the chance to find out more about the world in a fresh and energetic way.”

What’s New? will include three regular segments each week:

This segment explores a story which has featured regularly in the news and will fully explain through graphics and films what the story is about.

A weekly interview with a celebrity – or someone who is making the news in Africa.  This will include musicians, artists, authors and many others.

What’s New? gives young people a chance to tell their own stories about their lives, school and what they enjoy doing.

Co-presenters Debula Kemoli and Ben Hunte will bring their own infectious style to What’s New? Debula Kemoli said: “There are many stories young people want to share, I can’t wait to tell them all.”

The programme will be presented from an immersive virtual studio where stories will be brought to life in a fun and engaging way using the latest VR technology.

What’s New? will engage younger viewers with events in Africa and the wider world, through specially commissioned features such as:

What’s New? will help the audience distinguish between trustworthy news stories and sources, and fake content that is being shared online. We will also expose misleading facts and figures which distort the reporting of a story.

This regular series will explore topics that children are talking about. What’s New? will get groups of young people talking to each other, focusing on areas that they might find hard to discuss with adults.

What’s New? will be aired at the following times in Africa: