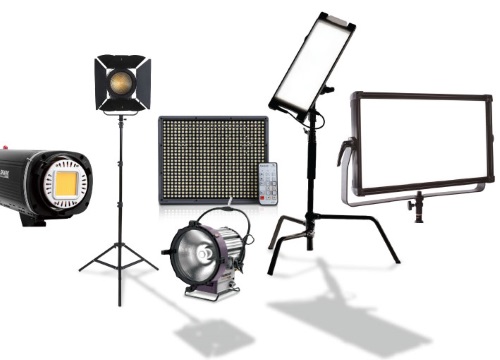 One of film’s most important companion industries, lighting is a complex and dynamic field. Not only must lighting fulfil a variety of functions, from the purely practical to the highly artistic, but fast-paced advancements in lighting technology mean that the industry exists in a constant state of evolution.

In this article, we hear from leading lighting professionals about the challenges of the industry, exciting new products on the market, and how innovations in the realm of camera technology are affecting lighting practices in film and television production.

Staying Ahead of the Game

Without doubt, the main challenges of the lighting industry relate to keeping up with the latest trends and technologies. This is true of technicians and practitioners – who need to keep learning and taking on new skills as they become familiar with the new equipment that is constantly introduced onto the market – as well as those in charge of the supply of these lighting products.

Marius van Straaten, the CEO of Cape Town-based Visual Impact, says that managing product supply in the context of the dynamic and ever-changing lighting industry is “the key challenge to renting out equipment. Equipment improves quickly and therefore stock becomes outdated. Next thing you know, you have old kit on the shelf that costs you a fortune. The solution is to buy carefully and try to identify niches in the market.”

Meanwhile, Luke Frankel – CEO of Broadcast Lighting in Durban – points out that this challenge also has a logistical component: “Keeping up with demand can be challenging at times, as most items are sea-freighted due to their size, and this takes time. So we have to time our stock orders so that we always keep up with demand.”

John Harrison, CEO of Movievision and Southern Lighting, two companies based in Johannesburg, says that it helps to cultivate productive relationships with a small number of equipment agencies. “That way we know the stock from those agencies backwards, and we are always up to date with the equipment that is coming out of those factories.” Harrison and Sean Boyce, technical director of Southern Lighting Solutions, also point out that – in the context of South African film and television production – the scarcity of funding often means that lighting companies are forced to accept lower and lower prices for their services. This has a detrimental effect on the industry as a whole, as often companies cannot accumulate enough capital to reinvest in new stock.

The experts are unanimous in identifying a shift towards LED lighting as the industry’s most noticeable recent trend.

In Van Straaten’s words, “LED technology is taking off like a rocket. Producers are increasingly appreciating secondary benefits like the very low power consumption, small size and portability.”

Frankel – whose business model is built around LED lighting – confirms this shift: “There has been a huge movement from the old tungsten forms of lighting over to LEDs. New types of LED lights are being produced in all types of styles, from LED Fresnels to LED Kinos. With technology getting better and more powerful in terms of colour processing, the use of LED in video production is increasing rapidly. Most of our LED products are in demand at the moment, with no sign of slowing down.”

Harrison admits that there has been a shift towards LED lighting, but likens the current age of LEDs to “early computers, in that they are very expensive but still quite limited in their output function compared to what you can do with tungstens and HMIs. They’re gaining ground all the time – every year they get better, brighter and more efficient – but we are still in an exploratory stage. People will continue to look to LEDs in the future, however, because it does cut down on power. Instead of needing a big, thick 63 amp cable, you can whittle it down to a 15 amp cable – and obviously you can put a lot more fixtures on the same circuit.”

When asked which pieces of lighting gear they would deem to be essential – and which items of equipment every aspiring film lighting technician should be familiar with in 2018 – the interviewees drew attention to some exciting new products on the market.

For Van Straaten, it is essential to know “how to navigate the ARRI SkyPanel’s menu, as well as the Wi-Fi controls for the DS (Digital Sputnik) products.” He identifies the new DS Voyager as 2018’s must-have lighting product. “The Voyager is a Smart Light, a fixture concept which combines light source, battery, and remote controller into a single product. All you have to do is add a phone or a computer as an interface – you don’t need extra software licenses and no more hardware is required to run it.”

According to Frankel, “Every videographer should be familiar with, or have, an on-camera light (Sun Gun), as it is the most versatile and handy piece of lighting equipment that you can have.” In terms of products he is looking forward to, he says that “large power LED lights are coming in that are producing great light for large-scale stage and studio productions. There are three products that we are excited about: firstly, our LED Fresnel 300 watt, which is the equivalent of a 575 HMI, but at one-fifth of the price, making large-scale studio lighting way more affordable. Then the Shark Light 200 watt with Bowens mount fitting, which allows for any photographic accessory to be attached to the light. And, finally, a new beginners LED setup, which consists of two softbox lights with stands and is extremely affordable for startups or hobbyists.”

Boyce is hesistant over the question of ‘essential gear’: in his opinion, it should never be the case that you use whatever you have lying around, or simply what you feel comfortable with. “The best designers will use the equipment they know will give them the effect they want to create,” he says. However, he acknowledges that, “in terms of current trends, the ARRI SkyPanels are definitely some of the most popular in the film industry. Other favourites are faceted HMI units, such as the M18s from ARRI and Filmgear, as well as LED lightpanels and softlights.”

The Evolution of Camera Technology

Lighting is, of course, fundamental to the craft of filmmaking (John Bergen memorably described light as one of photography’s “primary raw materials”). But, how has the evolution of camera technology come to affect the lighting industry?

The DoP of the Oscar-winning film The Revenant, Emmanuel Lebezski, famously only used natural light in the shooting of that film, and techniques like this are becoming increasingly popular as camera technology continues to develop. As Van Straaten says, “the sensors are getting better and better, and in some instances can allow one to use less artificial lighting. I was on a commercial last week and the wide scene was beautifully lit with one S60C SkyPanel. The camera was a Sony A7S Mark II with an ISO range from 100 to 469,600.”

In Frankel’s view: “Even with today’s increasing camera technology, there will always be a need for light to create depth, textures and colour in the professional field.” He says the fact that “cameras are getting better results in low-light environments” means that “less distracting and invasive” natural lighting can be used more often, but that “some form of light to capture the aesthetics of the moment” will still be key to the videographer’s craft.

Harrison and Boyce have an interesting take on the matter, claiming that the advancements in camera technology have had a profound effect on local production values. “In my opinion,” Harrison says, “camera people are becoming more computerised. And an effect of this is that a lot of people are doing saturation lighting, which for me is not natural. But because it’s easy to do, and because you can get the instant feedback of seeing it on the camera monitor – the people behind the camera think they don’t have to worry, because everything is lit. And often it gets put out like that, it’s like a sausage factory where everything looks the same as everything else, and for some reason we find it acceptable. But that’s not our craft. Our craft is art.”