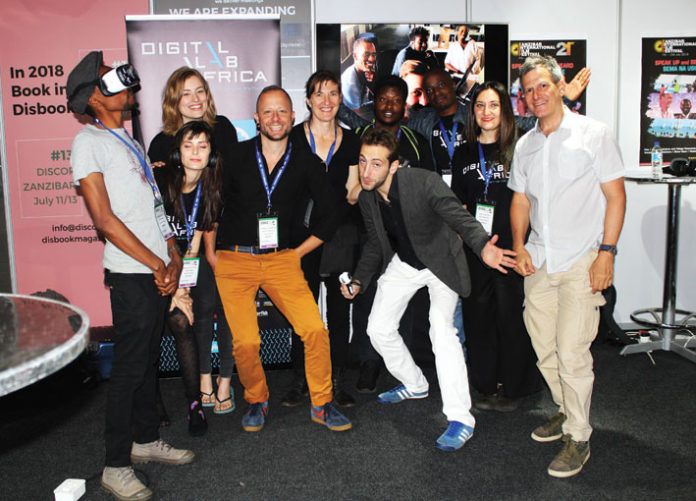 The first African VR Film Jam project took place during DISCOP Johannesburg 2017, which ran from 25 to 27 October at the Sandton Convention Centre.

Digital Lab Africa together with the French VR studio, Wonda VR facilitated the global initiative which travels to various cities around the world, giving creatives a 48-hour “WondaFull” VR assignment.

Twelve creative professionals from different art disciplines started their 48-hour journey on 24 October. Their challenge was to write, shoot and edit a four to six-minute VR film experience under the theme ‘mixed cities’. Furthermore, this Johannesburg leg of the initiative was inspired by Desmond Tutu’s quote: My humanity is bound up in yours, for we can only be human together.

“We choose Tutu’s quote because of its stand against racism and xenophobia and in keeping with the philosophy of Ubuntu,” said Arnault Labaronne, VR Film Jam artistic director.

The creatives were grouped into teams of three. The teams were named according to colour; green, blue, yellow and red. “It was important for each team to have three types of skills, which included design skills, field direction and a performance talent,” comments Labaronne.

To assist with the challenge, each team was given a mentor to guide them throughout the challenge as well as equipment including Samsung VR cameras, headsets, and a tripod. They were also tasked to make use of the Wonda VR software to edit and view their VR films.

On the final day of DISCOP Johannesburg, Labaronne helmed a quick presentation on the VR Film Jam initiative as well as the creative journey of the different teams. The teams were also there to present their final works and allow the audience to view their VR films.

“The theme was mixed cities so our idea was that no matter where you are in Joburg, there are always two perspectives to any story and we wanted to fuse these perspectives into one,” said Sharp-Lee Mthimbula.

This, they did by creating an immersive experience of Johannesburg, that allows the viewer to see two parts of the city at the same time. The experience is enhanced with different soundtracks for each scene. Additionally, the viewer can create their own experience depending on which part of the city they want to explore.

“Ideally if we were to take this concept further, we would get local producers, different guys from different sides of the city to actually create those tracks, and to curate those sounds and do a couple of live sounds from the various places where they are; and who knows in the future, it will incorporate smells and other experiences with new technology,” commented Gareth Steele from Alt Reality who was the Green Team’s mentor.

Anita Szentesi described the 48 hours as “exhausting”, “tense” and “fun”. “I learnt so much,” she added. Szentesi is an architect by profession and is also busy pursuing her Masters in filmmaking.

In-Human is the name of her group’s project, which is about the light and dark side of humanity. “No person is either all good, or all bad; everyone has a good and a bad side. It’s about being human inside this immersive experience,” shared Szentesi.

The Blue Team’s VR experience takes place within an elevator, where participants are faced with different choices that could either be good or bad for them. Coming out on the wrong floor could get you killed, while staying in the elevator allows you meet different strangers.

Szentesi’s teammate and actor, Muzi Mthembu comes into the elevator at some point; looking like a scruffy young man with a guitar. The film hopes to also touch on human prejudice and the misconceptions people have about others.

Other works include the musical project named, Iphupho (Dreams) by the Red Team and, Who took my milk? by the Yellow Team.

Erika Denis, regional head of Media, Film and Music at the French Embassy thanked all the participants, mentors and sponsors including Maxum Digital and Tshimologong – Digital Innovation Precinct.

Vizrt Live Production Control Webinar: Tearing down the walls of the control room

Shaping characters from the inside out