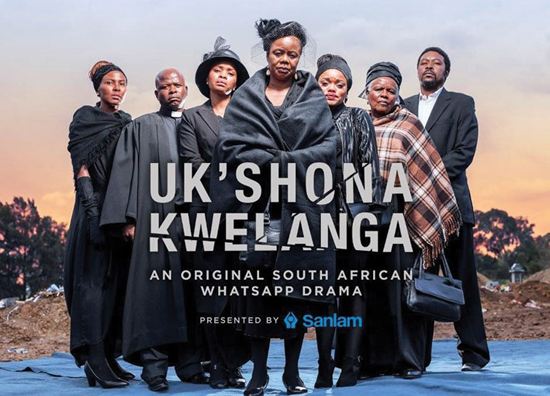 According to the 2017 South African Mobile Report by Effective Measure, 83 per cent of the population are WhatsApp users. This comes as no surprise in a country where #DataMustFall campaigns fall on deaf ears and WhatsApp has stepped in to offer a data-efficient way of keeping in touch and using its list of features which include texts, audio notes, work documents, images and videos – this has resulted in the country’s first WhatsApp drama series Uk’shona Kwelanga.

Ndaba has a lengthy history in producing content for the TV market which resulted in some of the most highly-rated storylines and award-winning shows that include Generations, Home Affairs, Sokhulu and Partners, and Shreds and Dreams which is based on Ndaba’s play that was at the Market Theatre and was then adapted to a television series format.

“King James Group, an ad agency commissioned by Sanlam to do their campaigns found me because of my experience as a TV writer. Then the brainstorm started,” explains Ndaba briefly.

The brief was to find a story angle to portray Sanlam’s new funeral product offerings; however with the competitive and congested market that is already shown on TV, which is no longer enticing to viewers, Ndaba had to find an unconventional and yet relatable way to tell this story and re-engage the audience to one of life’s most dreaded events.

“King James wanted to do something different – not the usual commercial – something accessible to people. Also the Funeral Scheme market is an important business for Sanlam; however in the past they have had challenges making inroads as a brand that is strongly associated with this offering. Besides having a very strong product offering to talk about, they wanted to demonstrate to their market that Sanlam has an understanding of the realities that come with the planning of a send-off for a loved one. So the creative challenge was to find a way to show this, in a way that would resonate with the target market and through a platform that they already engage with.”

The storyline is centred upon black family dynamics when the unforeseen death of a family elder, Bab’ Langa, occurs. His bereaved family is left with the task of planning and arranging the funeral. The family decides to start a WhatsApp group to plan the arrangements and shared responsibilities toward giving their much-loved family member a proper send-off. However drama sets in as family feuds, money matters and secrets come to bare as the plot thickens.

In order to follow the story, mobile users need to SMS their name and number to 45603 to be part of the Uk’shona Kwelanga WhatApp group and receive daily ‘conversations’. A once-off standard SMS rate applies. “The WhatsApp drama is told through text, audio notes, photos and video – just as if you were following a real family group (it’s an entirely new format). It is light on data so it’s easy for anyone to access it,” informs Ndaba.

Kim-Lara King, the content producer from King James Group and her team had the challenging task of taking Ndaba’s script and laying it out for production. “The most challenging aspects of this project was casting the right on-camera talent as well as nailing the scriptwriting. The message had to be relatable, so creating a fine balance of drama and real-life was key.”

“Collaborating with the best talent on our jobs is key to King James producing quality work. Leeroy Jason (photographer) who’s well known within the soapie industry and whose work reflects real life seemed like a great fit,” King adds.

The series was shot in Soweto and features several TV personalities from various soapies such as Linda Sokhulu and Makgotso M from Isidingo, Ivy Nkutha from Generations – The Legacy, and Bongani Madondo from Skeem Saam.

“It was very important to the team that we keep the overall look and feel of this campaign as authentic and real as possible. Shooting on location in Soweto was crucial in achieving this,” she says.

Jason created the stills for the series using the Nikon D3X, while Yash Lucid from Lucid Media captures the video scenes using a Panasonic GH4 camera.

“Photography took the lead on this campaign, establishing the overall look and feel with video following on to create the same aesthetic,” King shares.

The series has certainly taken the interest of South African mobile users as we are a curious nation with a rapidly growing focus in mobile technology, faster communication and great storytelling.

“The relatable story and approach to a sensitive subject matter, done in a fresh and unique way is why it resonates so well with the audience,” concludes King.