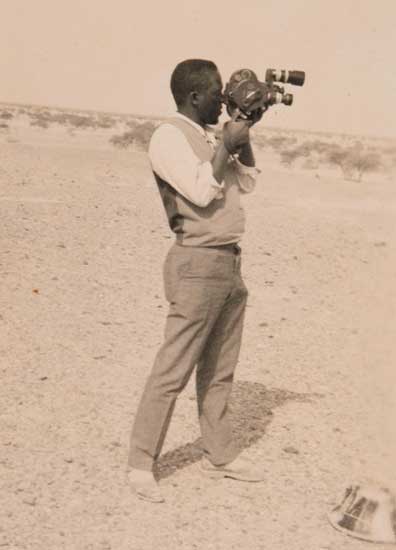 In addition to being known as the father of African cinema, Ousmane Sembène is similarly one of the key figures of world cinema. “Though Sembène is one of the most important artists of the last 50 years, his legacy is not yet secure, and his works – which are more relevant and powerful than ever – are not being seen,” says Jason Silverman, co-writer, director and producer of the documentary Sembène!

Nothing describes the impact Sembène has had on Africa and the world more than the opening line of the film: “I grew up in a small village in Senegal, with no TV, no newspapers, no radio. All I had were stories told by my grandmother. By the time I was 14, I dreamed of becoming French, like the characters in the books I read in high school. When I was 17, I discovered the stories of Ousmane Sembène, the father of African cinema. Suddenly, I did not want to be French anymore. I wanted to be African.” This is a line by the film’s co-writer, director and producer, Professor Samba Gadjigo.

The film poignantly explores the life of Sembène, a dockworker from Senegal, expelled from school in the sixth grade who, when he discovered literature and the movies at 14, dreamed of becoming a storyteller for a new Africa. From Senegal to Dakar to the French Army, he published his first poem in 1956 before returning to Africa in 1960 where he published three successful novels. Sembène was among the first filmmakers to indigenise cinema, disseminating African narrative structures, and creating his own production company. This revolutionary artist created under impossible circumstances using limited resources, and yet Sembène’s works have won awards at festivals in Venice, Moscow, Los Angeles and Karlovy Vary. All of his feature films have been translated into English, French, German, Japanese and Chinese. “Africa is my audience,” he said, “while the West is my market.” Sembène’s introduction of genuinely African film aesthetics transformed cinematic practice both in Africa and around the world, offering inspiration for other marginalised societies, whose members began to pick up cameras and tell their own stories.

Sembène! is told through the experiences of a man who knew him well, his colleague and official biographer Gadjigo, using rare archival footage and more than 100 hours of exclusive material. It was in 2009, the year of Sembène’s passing, when this passion project began. It took more than a year of legal exchanges before Gadjigo and Silverman were granted access to his home and his archives.

“Africa becomes alienated and too often Africans know more about London and Paris than they do about Africa,” says Gadjigo. At 17 he discovered Sembène’s novel, God’s Bits of Wood, and says it was a mind shattering experience. “I had been lied to for years and years through my education,” he says. He went on to read everything that had been published but was disturbed that it was not readily available in Senegal and it wasn’t until he lived in the US that it became clear that he would dedicate all his work and teachings to Sembène.

Without funding for the film and needing to cross the world to make it happen, Silverman and Gadjigo poured their life savings into realising their vision. Further challenged by trying to convince American firms to finance an African documentary, the pair turned to Kickstarter and gained worldwide support. “Family, friends and strangers came together,” says Gadjigo. “This is an opportunity to let other people know there is always a dialogue to the world and the best way is through art and culture.”

The labour of love was seven years in the making and has since been screened in more than 35 countries. “We spent seven years researching, collecting material, shooting interviews and editing, and have now spent about 18 months getting the film out into the world. We have another eight months or so of plans in terms of disseminating the film,” says Silverman. The film had been in edit for two years with Hollywood freelance editors but it was not coming together. It wasn’t until Gadjigo, riding a bus in Utah, met Ricardo Acosta, an exiled Cuban living in Toronto, who happened to be an editor. He then took less than nine months to “break the code and gather all our building blocks and use his magic fingers to music: everything was poetry for him,” says Gadjigo. “We wanted the story to create magic, and it did.”

2017 marks the 10th anniversary of Sembène’s passing and they are applying for grants to show the doccie to every single African country. “A film which should be shared with the world,” Gadjigo adds. “They say it takes a village to raise a child, it takes a planet to make a movie.”

“The opportunity to tell his story was a true gift, and the response to our documentary, which includes the launch of a restoration project for all of his films, has made all of the work worthwhile,” says Silverman.  He explains that they collected 180 hours of archival materials, which came in every format imaginable, and shot on a variety of cameras, including, at first, standard def Sony cameras, and by the end (as the technology shifted) HD Panasonic and Sony cameras. “The difference in cameras was due to the fact that we worked with African cinematographers when in Africa, European cinematographers when in Europe, New York cinematographers on the American East Coast, and Los Angeles cinematographers on the American West Coast,” explains Silverman. They edited on Avid, which he says was at the time the best system for a complex project that had multiple editing collaborators.

The biggest challenge was acquiring the materials, which came from dozens of different sources, and in many cases had technical problems. Silverman adds, “Few facilities in Senegal have climate controlled storage, and some materials were too degraded to use.”

Silverman says that weaving Gadjigo’s story with Sembène’s story took them a year of editing to work out how to do that. “Samba is not a traditional narrator; he himself had his life’s path irrevocably altered by his encounters with Sembène – first with Sembène’s work, and then with the man himself. But striking the right balance between the two interlocking stories was challenging,” says Silverman. He adds that working with Gadjigo was the most gratifying and deepest experience of his professional life. “We travelled to Africa together, discussed every element of the story and its contexts and then pushed each other to find the real heart and soul of this very important story. Sembène is a true hero to me, but the work I did was equally motivated by my desire to have Samba’s story recognised.”

The soundtrack includes selections from Baaba Maal, Youssou Ndour and from the album Águas da Amazonia, a collaboration between Phillip Glass and the indigenous Brazilian ensemble Uakti, which uses instrumentation that they create. Canadian composer Ken Myhr wrote original music.

Sembène! was released theatrically across cinemas in the UK alongside one-off screenings of three of Sembène’s other works mentioned in the film: Xala, Moolaade and Black Girl. More than 70 screenings in cinemas across the UK, made possible by Aya Distribution being awarded a BFI Programme Development Fund to present, Rebel with a Camera: The Cinema of Ousmane Sembène that will tour through more than 20 cities until the end of December.

Gadjigo and Silverman will be in the UK in October to take part in Q&As and discussions following selected screenings across the country. Aya Distribution project director, Justine Atkinson, says:“Through rare archive footage and personal anecdotes, interweaved with beautiful animation and led by a personal voice-over by Gadigo, the film captures the essence of Sembène’s work, providing an honest portryal of the father of African cinema. We are therefore extremely pleased to bring this documentary to UK screens this autumn along with Sembène’s films.”

Gadjigo explains that more than a filmmaker, Sembène was one of Africa’s most prolific and recognised writers, with seven of his ten published literary works translated into English and included in the curricula of high schools and universities throughout Africa. Sembène is considered as perhaps the most important cultural figures of 20th-century Africa, an artist whose 50 years of creative output led the way for generations of African, African-American and African-European writers, filmmakers and scholars. “We will never be Arabs or Europeans,” Sembène said. “We are Africans.”