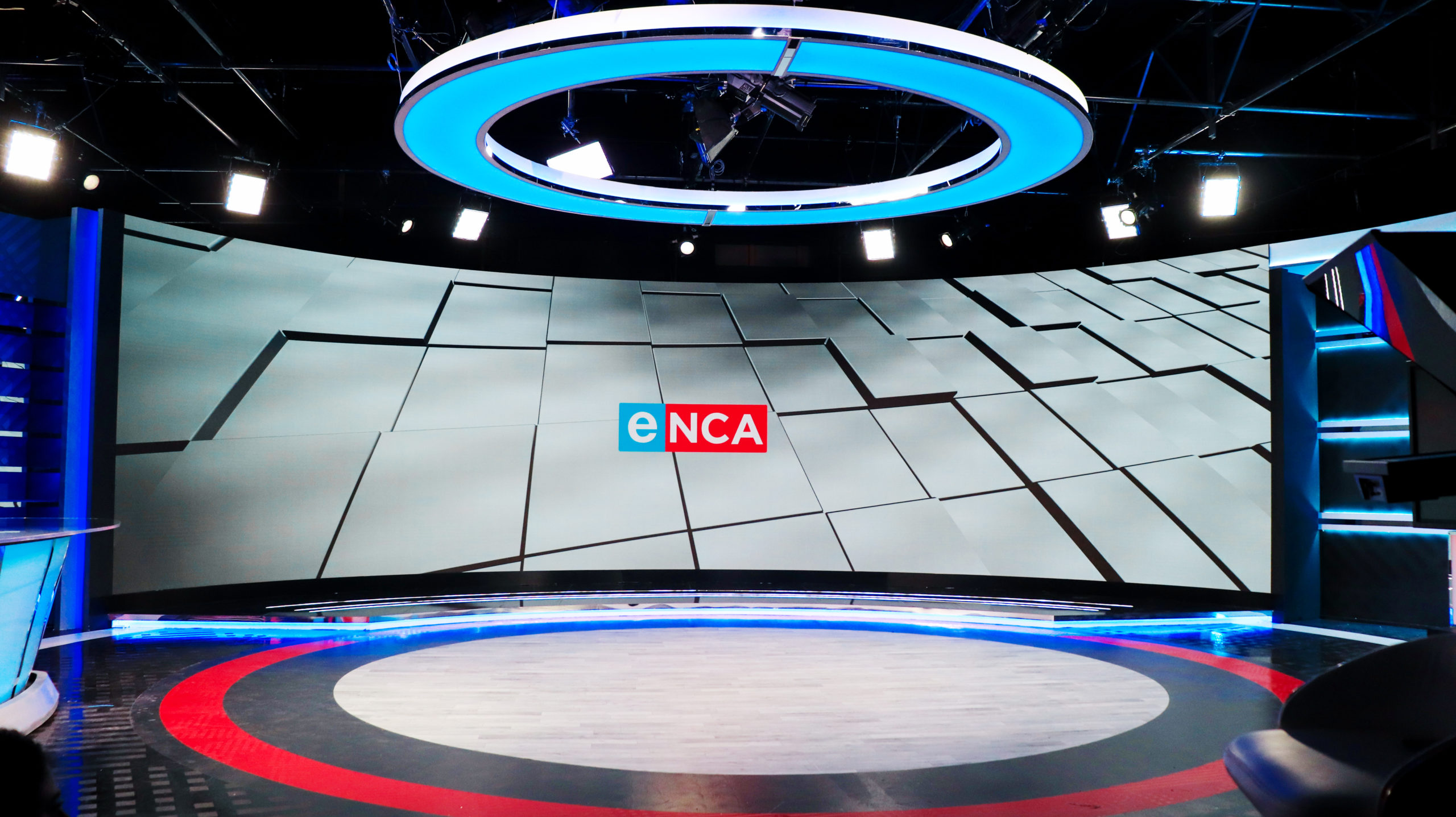 In a world that is fast-paced and ever-evolving, remaining the same is not an option. This seems to be the mantra that South Africa’s number one news channel for local and international news, eNCA, is embracing with vigour. Twelve years into the business of news broadcasting, it is no coincidence that the channel has unveiled an impeccably designed 12×3 metre curved LED videowall as the effortless focal point of its refreshed high tech news studio.

The videowall is an enhanced feature for the channel – now in HD – and was no small feat to assemble. Construction began in late November 2019 and quickly became dubbed “The LEGO project”, when the Pallas manufactured screen arrived at the channel’s Hyde Park office in the form of 22 pallets, weighing in at an astonishing 2.9 tons. The impressively innovative in-studio video wall is the biggest in African news broadcasting and has a resolution of 10000X2532 pixels and a pixel pitch of 1.25mm. It is seamlessly driven by Viz Multiplay, which will ensure that the eNCA viewer receives voice, pictures, text, and videos at an enhanced sensory level. Also new, the set shape in the revamped studio follows an unconventional semi-circular shape. The change in set shape will allow for an increase in camera angles, compared to the previous U-shaped set design.

Integrated by UK based digital company Elport Digital, who are no strangers to e.tv, the company ensured that the cameras on the studio floor have fibre optic cables for interconnection. They reduced the platform in front of the video wall to allow the cameras an ability to creep as close to the screen as possible, and the reduction overcomes a challenge that eNCA had with the previous set design, where the platform was limiting the camera movement on the floor.

“We increasingly aim to be on the pulse of news broadcasting, and in a world driven by extensive technology and the importance of progressive infrastructure, we are proud to note that we proactively contribute to the conversation. Our use of technologically advanced equipment in the new HD studio is exceptional, and as a result, we have been providing a refreshed feel to all our flagship programmes since we launched on 13th January,” comments Group Technical GM, Rose Rogers.

Six Panasonic HD cameras will capture the in-studio scene, five cameras are on robotics while the sixth is on a jib. The increased number of cameras will ensure that varying angles and on-set locations are perfectly captured while telling brilliant news stories.

In addition to the large number of cameras that are in the studio, the set has a feature that allows the use of the Vision Control Room as a backdrop for specific news bulletins. Installed at a seven-degree angle to minimise reflections and with the backdrop usage in mind, the news channel needed to keep the noise levels from the control room at an absolute minimum, and thus had to fit an impenetrable glass separator from floor to ceiling.

Producing a large amount of heat is almost a given when taking into consideration the sheer size of the video wall, and it is for this reason that Elport Digital, together with e.tv’s engineering team, made provision for the heat. In-studio cooling has been optimised to ensure that damage to the screen by operating it at high temperatures does not occur. For this, the teams have contained the cooling directly to the studio floor. Also, the return air duct has been placed above the screen to ensure that the studio is as cool as possible.

“Our lighting is state of the art, and that affects the simple complexities of alterations to our wardrobe and make-up departments. Although these elements may be considered minuscule, they are a great part of what adds to the overall viewer experience. The high number of cameras will captivate audiences via different angles and locations of the sets and will play out magnificently on the 1080i/50 uncompressed HD video format. It took dedication and patience from our team to ensure that the new studios are a perfect fit for the upgraded broadcast quality. We have greatly invested in the value of the studio and look forward to a tangible return on investment,” concluded Rogers.

When tuning in to DStv Channel 403, eNCA viewers can look forward to a refreshed look and feel and continue to have news breaking in HD, by some of the country’s most informed anchors and reporters.