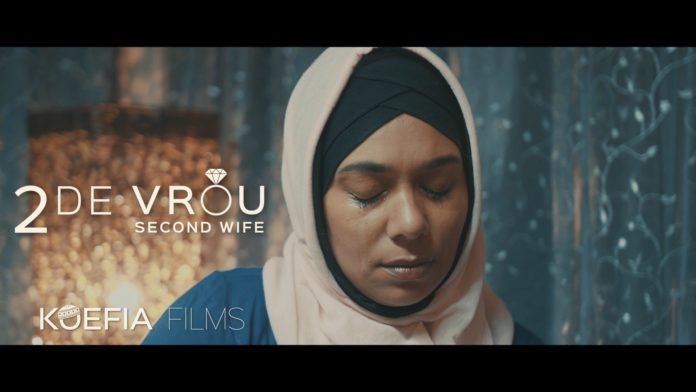 2De Vrou is a three-part Facebook series created by Cape Town filmmaker Sedick Simons. The series marks his filmmaking debut under Koefia Films – a platform that Simons intends to use to create Halal-permissible Islamic content that will educate and stimulate discussion in the Muslim community.

The controversial series, 2De Vrou, tackles issues pertaining to polygamy in the Muslim community, more especially the pain often felt by women in the community when their husbands take on another wife. “Our film in no way undermines the Quran and Sunnah (our lifestyle or our beloved prophet). It tackles a pertinent issue in our community and contextualises it for people who deal with this on a daily basis. Most Imams (may Allah bless them) and Muslim men today focus on the Fiqh/Sharia but very little on the emotional trauma some of our women experience,” explains Simons, who felt that making 2De Vrou could help bring the plight of women affected by this issue to the fore, and lead to a much-needed discussion about this common but largely unspoken-about practice.

Part one of the series is a 10-min short film set in Mitchells Plain, which follows a married woman named Nuraan. A wife and mother who practices her faith diligently, Nuraan is distraught when – on a visit to her local butchery – she discovers that her husband has taken a second wife. This new information puts her faith and marriage to the test when Nuraan questions her rights as a Muslim woman and her husband’s betrayal for keeping his new wife a secret from her for more than six months.
The short film sees Nuraan confront her husband as well as the local Moulana to voice her concerns. Her journey to find a possible solution to her predicament leads to an open conversation on the topic with some of her close family.

Still to be shot, part two of the series will focus on how polygamy impacts the children involved, the second wife and the husband. While in Part three, the team will look into the reasons why the Prophet took on more than one wife.

According to the Quran, the religion permits men to have up to four wives, with the condition that he treat all of them equally. “You may have heard of someone that didn’t treat his wives with fairness and justice. Maybe someone did it purely out of lust. Maybe that person was abusive physically and emotionally. But the act itself was allowed by God so we cannot think of it as wrong. We cannot eliminate it,” says Simons. “Men marry for different reasons: care, love, lust, friendship, etc. No matter what the reasons, when a man takes a second wife, the first wife and children in most cases experience some level of emotional and behavioural issues.”
The female lead Nuraan is played by Nuraan Ajam – wife of Simons’s cousin, Achmat. The couple play the main characters in the series, even using their real names.

Simons says that idea for the series was actually sparked by Nuraan’s relationship with her husband: “I admire the bond between Achmat and his wife. They do everything together…I thought about what would happen if a third person entered their relationship. This sparked thoughts about how couples in polygamous relationships navigate the struggles of their relationships. I discussed the idea with them and the rest is history.”
Simons educated himself on the topic by discussing it with several local scholars: “I read online articles and watched videos on polygamy presented by international Muslim scholars. I also interviewed local Muslim women to get their thoughts on the subject,” he shares. “This is a subject that very often is discussed between friends, family, husbands and wives. I thought I could touch on the emotions a woman goes through – even though she is a practicing Muslim and understands polygamy is allowed.”

Part one was shot at the Simons house in Mitchells Plain, the butchery in New Woodlands and at the Al-Masjidur Rawbie mosque in Portlands.

“My filmmaking methodology is guided by Islamic principles shaping the production process. The manner in which the characters are dressed in the film is also according to Islamic principles,” explains Simons, who shot the first installment on the Panasonic Lumix DMC-GH4 camera, paired with Sigma 18-35 lenses. Aputure Amaran LED light panels and No Name fluorescent tubes were used to light select scenes. Besides having a team to help with the lighting for the shoots, Simons handled everything else himself – from the script, to production, post and final upload.

The first episode in the series was released in late-June of 2019 and went viral within days. As a result, Simons was asked to be a guest on various radio shows to discuss the film.

The first installment of the three-part series has sparked much-needed discussion on the topic, with several women coming out to share their personal stories of living in a polygamous relationship and how they cope with having to share their husbands. 2De Vrou received mixed reactions from Muslim men who are for and against this practice.

Simons says that he hopes to start shooting part two in the first week of August. “I’m busy writing part two and because I work solo, things take a bit longer. I also need to work around my cast’s schedules. This is not a paid-for production, it’s self-funded.”

Simons is already working on other film ideas with roots in the Muslim community. Through his films, he intends on changing the way the world views his religion and his people, and this starts by educating citizens about things that take place in their own backyards.

“Western films depict Islam in a very negative way. Muslims are always terrorists or the bad guy… It has always been my dream to create Halal-permissible Islamic content that can educate and stimulate discussion in our local community. The only way to tackle this problem is to create our own Halal Islamic content that is both informative, educational and entertaining for everyone. Not just Muslims,” Simons concludes.