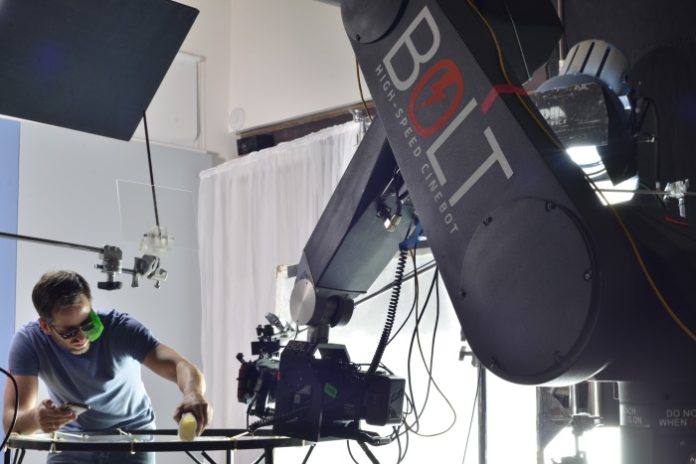 At the 2019 South African Film & Television Awards (SAFTAs), there was an unexpected star on the red carpet: the ‘Glambot’, a high speed camera robot operated by the team at ZAP Speed, which provided beautiful slow-motion shots of strutting celebrities to the live feed of the event broadcast by the SABC.

As Paul Thompson explains, this technology “first debuted at the Oscars about three years ago. I like to think of it as the ultimate selfie – these are glamorous people who love to perform, and so it’s a lot of fun for everyone.”

Peter Constan-Tatos describes the Glambot as “a bit of a show unto itself” and provides some insight into the technical rigours of the operation: “We were shooting 500 frames a second, three-second clips – that’s 1500 frames at 2K every second. We had to get that footage off the camera, cut together, graded and out to the OB van for the live feed. We accomplished this with just eight people – two for lighting, although Paul also got stuck in on that side, I had a couple guys to help me set up the robot, and there was a DIT and a focus-puller and that’s it.”

Of course, although the Glambot was a showcase deployment for the company, ZAP Speed’s operations are far more extensive. Operating mainly out of Foghound Studios in Midrand, but with frequent business in Cape Town, the company provides a one-stop high speed filming solution.

Commenting on the origins of the company, Constan-Tatos says: “We looked at the fact that there is no dedicated high speed service here in South Africa. There is an equivalent that was started many years ago in Germany called The Marmalade, and what they did was bring in all the skills necessary to make high speed filming cost-effective. What often happens is that production companies hire in all the different parties, but they haven’t worked together before, or they’re not working as a team until they get to set – and this leads to costly inefficiencies.”

Thompson adds that “Peter has kept all his gear with Neil [Symon] at Foghound Studios, and we’ve all worked together over the years. Peter is the motion control expert – that’s his background, and that’s why he’s in charge of the robots – while I come more from a commercial and filmmaking side, as a director and lighting cameraman. I’ve also done a lot of tabletop work and Foghound has studios and edit facilities, so we collaborated our skills and decided to launch this new venture.”

As Thompson points out, having this pool of experience mitigates risk – a crucial factor because “any high speed filming is expensive. The robot’s expensive, the Phantom cameras come in at a price, and because you’re shooting at high speed, you need tons of light to fill the aperture.”

A BRIEF HISTORY OF HIGH SPEED FILMING IN SOUTH AFRICA

“Twenty-five years ago, a high speed camera was a big, bulky thing,” says Constan-Tatos. “The Photosonics must have weighed 50 kilograms, at least, and you’d burn about two hundred feet of film just to get up to speed. It was horrific from a producer’s point of view and it cost big money. We were the first to put a camera on a robot in this country. Purpose-built motion control rigs – like the Milo, for example – were the industry standard, but when we looked at it, it was just too expensive. Not only that, but in those days it was locked onto a Mitchell film camera – and we had a younger group of directors who were wanting to shoot video, they just didn’t have the budget to shoot film.”

For those who don’t know, the machines used by ZAP Speed are, technically, “Robots that weld cars. They are general material handling and welding machines which exist by the thousands on factory floors around the world, mainly in the car industry. So the specialisation comes in the programming, as well as in adapting them in certain ways – such as making them more portable, because usually they’d be bolted to the floor.”

In contrast, the company’s veteran Motoman robot – a popular unit still produced by the Japanese company Yaskawa – has been deployed “on a yacht, a fishing boat, up sand dunes in Atlantis and at the top of Chapman’s Peak.”

Constan-Tatos says that re-purposing factory robots has become the new standard in the industry, with companies such as the UK’s Mark Roberts Motion Control now selling these units pre-programmed with proprietary software, and he shares some information about technical developments in the field over the years.

“What’s interesting, is that the robot we had twenty-five years ago – we actually needed to slow it down. Its movements were too fast for the cameras of the day, so we geared it down to get smooth starts and finishes. But now it’s going in the opposite direction again – now the cameras are running so fast, we need faster robots and we’re doing what we can to speed them up.”

Delving into the topic of technical developments in the industry, Thompson says: “The contemporary Phantom cameras are not only much smaller-format units, but the frame-rates are dramatically higher than you could get in the old days. The Mitchell camera could only go up to 120 frames per second – we’re now shooting 1500 frames, even up to 2000 frames per second.

“Another big development,” Thompson continues, “has been the automation of things like focus-pulling and zooming. Especially in the high speed environment, a focus-puller can’t do the job quickly enough – that needs to be programmed into the robot’s brain. So, we use a focus-puller to do a focus pull on a slow movement of a shot; the robot software then records and stores this data and repeats the focus pull at high speed. We can also program a zoom in much the same way.

“The advantage of this is that you can programme the robot to do the same move over and over again – making sure you capture the exact moment the magic happens. If you’ve got a very precise move, Peter programs that robot every step of the way – so it can do a curve, a twist, every conceivable motion. It’s like a wrist. That’s where the motion control aspect is so useful: you can repeat the same move again and again, but change the background or the action area. Meanwhile, with high speed, the value of having precisely-programmed moves is when you introduce a second robot – you can coordinate the two to work together, with one pouring a bottle at the exact millisecond that the camera moves to capture it, for example.

“To try and do that move with normal operations becomes impossible, because you’re shooting about ten or twenty times faster than the normal frame-rate. You might get lucky with a straight zap-pan to get the shot – but with the robots, we can build in the curve and convey the sense of smoothness of the pour.”

Thompson summarises ZAP Speed’s uniqueness as a company as follows: “High speed has been around for ages, but what makes our offering special is the camera integration and the ability to synchronise the robotic actions. So you can move the camera and the subject-matter around at the same time, which creates the possibility for some amazing shots.”

Constan-Tatos is keen to underline the service-based approach the company takes: “ZAP offers a specialist service to companies requiring any high speed photography, from tabletop to any form of live action. We have the equipment to move the camera at super high speed very precisely to create very dynamic and exciting shots.

“If someone has an idea, they can come in – we have the machinery here, we can do tests, very often at little or no cost so that we can provide proof of concept for them. Then, on the back of those tests, they can present to their clients and we can go forward into production.  It’s vital with motion control that we’re involved in the early stages – we can save a whole lot of time and money in post that way.”

Thompson agrees, saying: “We offer ourselves to the industry as a service, to help companies create interesting shots. We work as a team to develop that image. We have the skills to go from brief to final execution, but we are also happy to work within crews: work with directors and cinematographers to help them develop their ideas. We have great facilities here, two studios where we can test ideas and work out shots beforehand. Almost all the macro photography work we do requires special effects – perhaps a machine that will throw things around, or throw things up into the air – and so we work very closely with FX crews all time, they are crucial to our business. We have workshops here to develop this skill in the SA industry, we build sets – we are committed to supporting this aspect of the film industry in South Africa.”

Constan-Tatos concludes the interview by revealing the company has just purchased the latest model of the Motoman robot. “It’s a big, fast machine. We’re still in the process of developing its brain,” he says with a smile.

For more information about ZAP Speed, contact paul@zapspeed.tv or peter@zapspeed.tv.