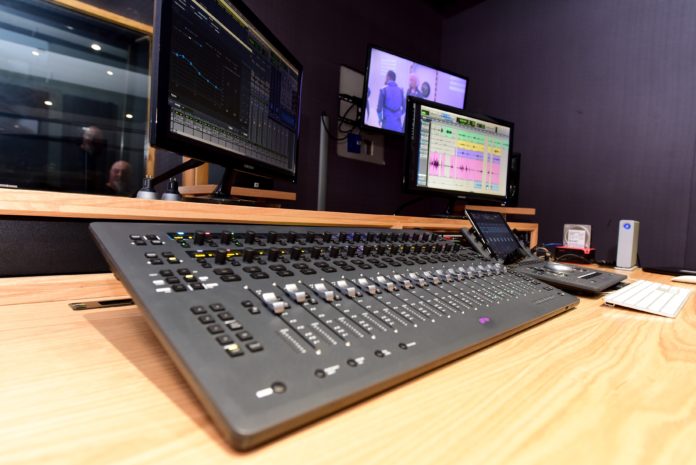 Urban Rhythm Factory is the dedicated audio and post-production wing of Urban Brew Studios, one of South Africa’s longest-standing production houses with a track record of quality output that stretches back nearly three decades.

When Urban Brew recently completed their new move and studio upgrade, Urban Rhythm Factory also took the opportunity – in the company’s words – “to make its creative capabilities and workflow efficiencies equal to its high-profile projects.”

Tshepo Mashishi, the head of Urban Rhythm Factory, explains the origin of the company: “Urban Brew was already well established by the year 2000, which is when we started to supply them with music and mixes on a regular basis. Urban Rhythm Factory was a small studio out in Lonehill – they used to send people over from Urban Brew in a production van to get the mixes – but we formed a strong working relationship this way, and eventually we moved on site and became an official division of Urban Brew.”

According to Mashishi, Urban Rhythm Factory’s nine state-of-the-art studios are mostly tasked with “television production, from kid’s shows to reality series, movies and ads. We’ve just done two advert campaigns for Vodacom and Standard Bank, and we’re busy on some others.”

In addition to the full suite of sound services – from composition to recording, mixing, mastering, editing, publishing and rights management – Mashishi explains that the “future-proof” design and cross-compatibility of the new Urban Rhythm Factory studios offer many unique value propositions to clients.

The wide-reaching technology upgrade of the new Urban Rhythm Factory studios saw them become the first audio facility in South Africa to feature the new Pro Tools | MTRX audio interface. Avid’s most current release, the MTRX features a modular design capable of hosting a number of newer technologies such as MADI and Dante, as well as the ability to record up to 384khz DSD. With Pro|Mon 2 included, the MTRX gives you control over monitoring, talkback, summing and fold-down, whether mixing mono or producing a 64-channel ATMOS mix.

Moreover, each studio at Urban Rhythm Factory has been equipped with the tools that best fit its specific purpose. While some studios feature Pro Tools | MTRX interfaces, four others are dedicated to audio post production supported by Pro Tools | HD Native systems and other studios cater to music composition and production through Pro Tools | HDX systems. As well as being able to record and mix in higher 32-bit, 192 kHz resolution (with more headroom) and track and monitor with extremely low latency, the Pro Tools | HDX systems allow Urban Rhythm Factory to handle large, complex productions that might involve multiple audio sources and thousands of tracks and sound clips.

As Mashishi explains, “Our recording studios and control booths are seamlessly connected. We’re all on the same, integrated technologies and our studio rooms are cross-compatible. So if an engineer is missing for whatever reason, another can jump in there and continue with the work; you can move a project from one studio to another; and, just like the booths, the control rooms are interchangeable. So you can link through to the studio next door and operate it, and with the Avid S3 Dock you can even control your DAW remotely, using an iPad.”

In practical terms, these improvements enhance the studio’s capacities and improve its workflow efficiency, and can result in some unique recording benefits. “Of our five music recording studios,” Mashishi explains, “two of them are actually paired. So if you have a large choir, you can split them into two groups, and record them into one control room for greater isolation and balance in the mix.”

Not content with their busy production schedule – which includes Yo TV, the longest-running children’s show in South Africa and Khumbul’ekhaya, which is in its 14th season – Urban Rhythm Factory are also in the process of launching an exciting web-based music library project.

“The website will be a comprehensive music library, with all songs [encoded with metadata]. Sound designers and other production houses will be able to go to the website and search by instrument, tempo, mood, genre, geography – it will be an amazing resource to find the right music and sounds to match to your project. It can also be a clear way for people to identify the texture of the sound they want for our in-house team of composers to work with.”

Regarding this aspect of Urban Rhythm Factory’s operations, Mashishi says: “We have four in-house composers that have been with the studio for more than eight years, but we also have a pool of external composers that send us new music on a monthly basis. This is because we want to stay at the front of the pack from a procurement perspective, as well as keep our library sounding diverse and fresh.”

There is certainly a fresh and exuberant atmosphere around the studio, and Lerato Moseki, marketing manager at Urban Brew, speaks about the importance of always being on the lookout for new talent, and of developing the next generation of technical engineers through internships and training programs.

“With the move, and our new increased potential, we are currently optimising the overall brand strategy of Urban Rhythm Factory, but we know – with our facilities and our personnel – that we are sitting on gold here,” she concludes.