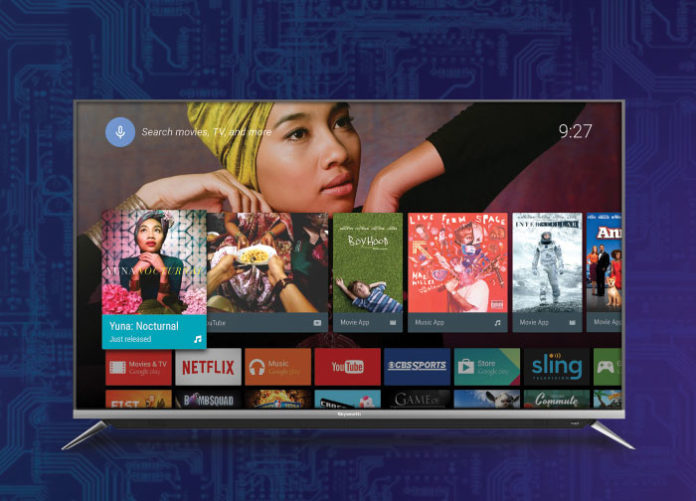 New products come to market all the time, but it is rare when a new category of product is launched. The new G6 from Skyworth, however, is precisely this: a sophisticated Android TV with integrated Google technology, the kind of device that will be the hub of smart homes of the future.

At an event held in the offices of Clockwork Media in Bryanston, Johannesburg, Bridget Meyer – the marketing manager of Skyworth in South Africa – gave an introduction to the company and its global operations.

“While Skyworth is new to the South African market, it is a well-established brand internationally. It’s 30 years old, and though headquartered in Shenzhen in China, it employs between 40 and 50 thousand people globally.

“In 2006, the company developed China’s first recordable TV, and by 2008 – only twenty years after launching – it ranked number one in the Chinese product market, both in terms of volume and revenue. This was followed by the development of the world’s first full colour gamut TV in 2013, and the first OLED TV in China.”

As Skyworth key account manager Jaco Joubert explains, with the launch of the G6, the company can now add a South African first to this impressive list of achievements.

“The biggest difference between the G6 and its competitors is that other companies take the approach of building a TV first, and then they add features like Wi-Fi and an operating system, and perhaps a custom app store.

“What Skyworth have done is different. They decided to take a global approach: they acquired Google’s Android operating system first, and then built the G6 around this user interface.”

He switches on the TV and reveals the home screen, which contains a few familiar apps – such as NetFlix, Showmax and DStv Now.

“This is what most people get out of their smart TVs,” Joubert says.

He then pushes a button on the remote control and simply asks the TV to open the Google Play Store, before continuing: “But with this being a Google product, you can now also access the Play Store. With this, you’ve got up-to-date access to the world’s selection of apps” – he scrolls past Spotify, a Washington Post video service, Chelsea TV – “as well as whole libraries of movies and TV series.

“Because these are instantly updated the moment a new product comes on board with Google, you’re never limited to what the manufacturers installed on the TV when you bought it.”

Joubert shows the functionality of the remote-operated Google Assistant by asking about the weather in Shenzhen, and points out that this feature has been programmed by the company’s engineers to recognise South African English, Afrikaans and isiZulu.

He continues: “Another great thing about the Play Store is its range of hundreds of games. Single-player, multi-player, online, offline, it’s got everything.”

He picks up a PlayStation-like controller – a device which comes in the box with the G6 – and explains, “when Skyworth was developing this product, the engineers at Google were very insistent that, if they wanted to use the software, they needed to make sure the hardware was up to scratch. So the G6 has a quad core processor and in-built graphics card, as well as 4GB and 16GB onboard memory. This means that users don’t need to invest in a separate gaming console – they can do it all from the TV.”

As appealing as these entertainment features are, perhaps the G6’s greatest attraction is its hyper-connectivity. In addition to three physical HDMI connections, the TV boasts integrated Bluetooth technology and in-built Chrome Cast, meaning users can wirelessly share content from any device directly to the TV.

This also means that the G6 is a “future-proof” piece of technology: ready and able to function as the hub within smart homes of the future.

“At this year’s IFA trade show in Berlin, Skyworth won a gold award for Innovation for their AI TV, which will launch in South Africa next year,” Joubert says. “But, when you consider what an in-built Android system gives you, you already have a lot of these AI features. You have voice recognition, you have Google Assistant, and you have an interface that can talk to any smart device. If you have a smart lighting system in your home, with the G6 you can dim or brighten your lounge by talking to your TV.”

In terms of construction, the G6 sports a sleek and attractive design with a full metal frame, an IPS panel to reduce glare and a built-in Dolby surround sound bar, which is impressively powerful and clear even at high volumes.

The picture quality is excellent, offering crisp UHD viewing, and this initial offering of G6 TVs will come in three sizes: 49, 55 or 65 inches.

Meyer explains that, “Skyworth is able to be competitive from a pricing perspective because we have a factory here in South Africa that manufactures the units. We import the components from China and the TVs themselves are made here, which is far more cost-effective than importing the full units.”

There is much excitement surround the Skyworth G6 Android TV, and the product promises to be a resoundingly successful introduction to the South African market for the Chinese company.

Meyer concludes by saying, “With the G6 – and the ongoing AI research that Skyworth is conducting through their partnership with Baidu – the company aims to remain at the forefront of entertainment technologies, by outperforming their competitors from a technology and innovation perspective.”