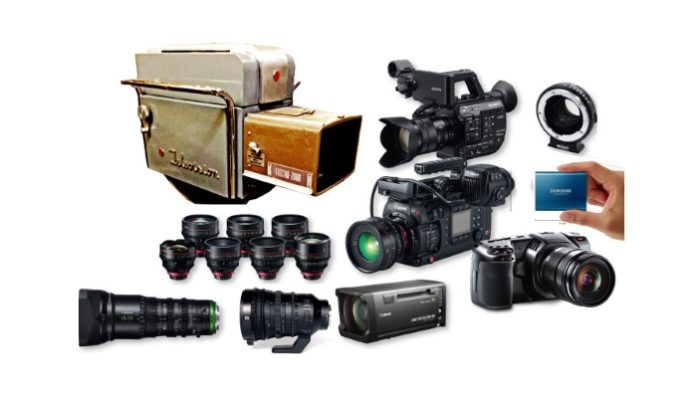 Over the years technical advances and electronic development in manufacture has produced some pretty amazing cameras. From the first three pickup tube colour cameras of the early 1950’s, to today’s high-tech full-frame sensors, the camera is essentially only as good as the glass in front of it. There are thousands of different lenses out there but none has had as bigger impact in the film and television industry than the zoom lens.

Almost 60 years ago, American inventor turned cinematographer Joseph Bailey Walker’s ever active mind developed the Electra-Zoom Lens for RCA, which became standard equipment for TV cameramen the world over back in the 1960’s. Whilst zoom lenses had been used in the cinematic field since the 1920’s, it wasn’t until Walker’s invention hit the scene that zoom lenses became an essential part of television production. His lens, as the name suggests, has a small electric motor that was used to drive two moving components, a front negative element that moved rapidly whilst the rear positive element moved slowly in the opposite direction giving the system a focal length range from 52mm to 152mm at f3. Much has changed over time when you compare Walker’s Electra-Zoom Lens with Canon’s new UHD-DIGISUPER 66, for example, which possesses a focal length range of 9mm to 600mm, and features a built-in 2x extender that allows users to double the zoom range capabilities of the lens – up to 1200mm on the telephoto end.

New lens technology was a big highlight of NAB 2018 and the search for ‘that ideal piece of glass’ was at the top of the list for many of the visiting buyers. There were three standout cameras at NAB, all due for release later in the year. Three different price categories but each one feature-filled and all with amazing lens choices to get the best out of what the cameras are offering.

Sony’s new FS5 Mark II camera (also released at NAB 2018) has the same sensor as the original FS5 but Sony has taken the colour science from the Sony Venice to provide better skin tones and a more cinematic look. You would be spoilt for choice when deciding on a lens suitable for this piece of kit. Starting with Fujinons 18-55mm T2.9, a Cabrio Sony E-Mount Cinema Zoom Lens, it’s a lightweight and compact alternative to other lenses on the market, while still keeping 4K Cabrio quality in an affordable package. The lens is colour matched to other Fujinon lenses such as the HK, ZK, and XK series, which enables smooth intercutting between lenses. The 85mm front enables use with many cine-style matte boxes via use of optional step up rings (rings not included). The lens is lightweight for a cinema zoom that holds focus and aperture throughout the focal length range. It is designed for camera’s with a Sony E-mount, so it has a short flange focal distance, but the lens allows for flange focal distance adjustment so you can fine tune it to the camera you are using the lens on.

Another suitable lens for the FS5 Mark II is the Canon 18-80mm T4.4. Based on Canon’s heritage in optical design and performance, the CN-E18-80mm T4.4 L IS KAS S produces exceptionally high quality images. Those using the lens, such as documentary filmmakers, will benefit from the incredible servo performance which is incorporated on the lens’s body, enabling precise digital zoom operations. Users are able to achieve maximum speed and responsiveness with seamless switching between auto and manual focusing and zoom. For those using a shoulder-style rig or shooting hand-held in demanding positions, the dedicated zoom grip is a perfect accessory – the grip simply attaches to the side of the lens, offering simple integration and zoom management.

Of course many will choose the bespoke lens from Sony itself,  the E PZ 18-110 mm f/4 G OSS Lens. This powered zoom lens delivers optimum performance in Super 35 mm applications, starting at 18 mm wide-angle and extending through an impressive 6.1x zoom range with a constant F4 maximum aperture. The G Lens optical performance delivers image quality that is suitable for 4K throughout the zoom range.

After years of asking for a successor to the original Blackmagic Pocket Cinema Camera, Blackmagic have finally given the fans what they’ve been asking for. The Pocket Cinema Camera 4K looks a lot different to the original (it’s definitely bigger in size) and although it might not fit inside your pocket it is still a compact size. The Aussies over at Blackmagic have clearly been listening to what their customers have been wanting as this camera is packed full of some impressive features. The Pocket Cinema Camera 4K shoots at 60fps in 4K and at 120fps in 1080p and has a dynamic range of 13 stops. Slow motion can be recorded in both 12-bit CineDNG Raw and 10-bit Apple ProRes 422 HQ. Blackmagic have really made a point of focusing on the low light capabilities of this camera with ISO range of 400 – 25,600. Users can load LUTs on to the camera and even plug in a USB-C drive to record directly on to, of note is Samsung’s new T5 USB-C solid state drive, it’s tiny but packs a punch when it comes to speed. Here’s another way Blackmagic’s camera stands out from most interchangeable-lens cameras. When you buy a Nikon, Canon, Sony, Olympus, Panasonic or Pentax camera, you are committed to that company’s lens mount. So, if you buy a Canon camera, you can only use lenses that fit a Canon mount. Likewise for Nikon, Sony and Pentax. Olympus and Panasonic use the same Micro 4/3rds mount, so they’re compatible with each other, but not the others. According to Blackmagic, the Pocket Cinema Camera 4K is compatible with all MFT-mount lenses, which is “extremely flexible and allows for different lens adapters so customers can also use PL, C, EF and other types of lenses from manufacturers such as Canon, Nikon, Pentax, Leica and even Panavision.” In most other cases, a manufacturer introducing a new camera doesn’t say that it’s compatible with other manufacturers’ lenses via an adapter. That’s because such adapters generally come with compromises, such as fewer autofocus options. US manufacturer Metabone have exclusively designed a  Nikon-G/F to Micro-4/3 mount for the Blackmagic Pocket Cinema Camera called the Speed Booster, much to the excitement of many creative directors who love their Nikon lenses.

The new Blackmagic Pocket Cinema Camera is supposed to launch later this year for US$1,295 (body only).

Canon has been in the television and video industry for a long time but hasn’t been able to provide a top-tier offering to match the likes of Sony Venice or Arri Alexa – until now that is. The Canon C700 FF (full frame) is their latest offering with brand new sensor technology built in. The C700FF sensor is a different size to the flagship Canon 5D camera, it isn’t as tall but it is wider (38mm x 20mm). This beast of a camera shoots in 5.9K at 60 frames per second and offers 15 stops of dynamic range. As with some of the other Canon cine cameras, the C700FF also comes with a built in 10-stop ND filter. Canon has greatly expanded their EF Cinema Lens offerings. The lineup—which includes the Prime, Zoom, Compact Zoom, CINE-SERVO and COMPACT-SERVO series of lenses—has become very popular for a wide range of users. With the introduction of the CN-E20mm T1.5 L F lens, the lineup now boasts a total of 21 lens models. This expansive line of lenses provides cinematographers with even more options to choose from, which can support enhanced content creation for a variety of uses and shooting scenarios. The trend with a lot of new cameras that allow internal 4K recording is that they use CF 2.0 cards for storage and that is true for this camera too. The C700 FF embodies a choice of two high-performance codecs for on-board recording –Canon XF-AVC or Apple ProRes. Like other cameras in the 4K Cinema EOS family, the EOS C700 FF uses CFast cards to capture 4K / UHD or 2K / HD. Despite the US$33,000 (body only) price tag, the C700 FF is one of the cheaper full-frame cinema cameras on the market.

No matter how cost effective or expensive the camera, the lens industry has always worked hard to provide us with a wide range of suitable glass fit for any filming requirement, and some credit must go to Joseph Bailey Walker who held no less than 20 patents on various camera-related inventions, including the Double Exposure System, the Duomar Lens for both motion picture and television cameras, and the Electra Zoom Lens. Cheers Mr. Walker!