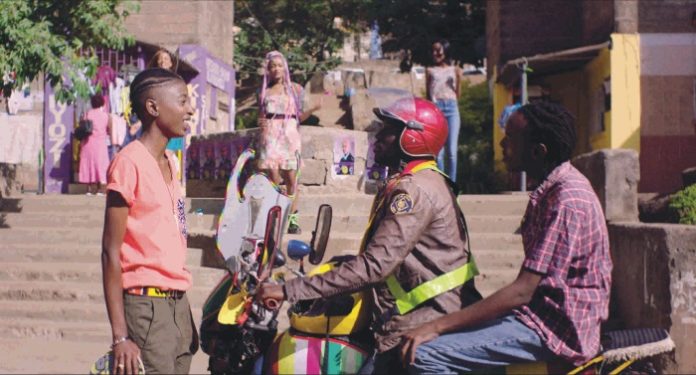 A thriller/horror film and a LGTBI love-story have been selected respectively as the opening and closing films of the 39th Durban International Film Festival (DIFF), which takes place from 19 to 29 July 2018.

In a bold move to shift perceptions of how African stories can be told cinematically across genres, the DIFF has selected a South African debut thriller/horror feature The Tokoloshe, directed by Jerome Pikwane, for opening night and Kenyan director, Wanuri Kahiu’s tender story of lesbian love, Rafiki as its closing film.

“With the current global focus on giving women a voice in a world dominated by masculinity and systemic misogyny, we wanted to book-end the festival with films that tell stories about women, their strength and their survival. We also want to showcase, from a cinematic point of view, that there are many ways to tell these stories,” says manager of DIFF, Chipo Zhou.

The Tokoloshe is directed by Jerome Pikwane, co-written with novelist Richard Kunzmann, and produced by Dumi Gumbi and Cati Weinek of The Ergo Company.

In The Tokoloshe, which stars Petronella Tshuma, Dawid Minnaar, Kwande Nkosi, Harriet Manamela and Yule Masiteng, a young woman, crippled by suppressed emotions, must find the courage to face an insatiable demon, wrought in her own childhood, when she tries to save the life of a girl-child abandoned in a rundown Johannesburg hospital.

“Using the horror genre I wanted to investigate how we suppress trauma, and what happens when the trauma comes to the surface. In effect, the Tokoloshe in South African mythology has become a foil for abuse that is ingrained in our society,” says director Jerome Pikwane. “And the characters, their journey, their relationships are the focus and not the beautiful shots nor the CGI, although we have that too.”

“The film is not quite what one expects from its title, so I dare audiences to see beneath the surface,” says Zhou. “It is a horror film, crafted so intricately, unveiling the menace that is our everyday burden as women in this country. But the film depicts the story of a survivor, not a victim. It is a chilling story, one that needs to be told now and is particularly relevant as it gives voice to the voiceless.”

Closing film Rafiki, directed by Wanuri Kahiu, produced by Steven Markovitz and starring Samantha Mugatsia and Sheila Munyiva, is a touching tale of two very different girls living in Nairobi, who fall in love. Co-written with Jenna Bass, the film was the first Kenyan feature film to be invited to Cannes Film Festival 2018 as part of the Official Un Certain Regard selection, and was a project in the 2012 Durban FilmMart.

“Over the years of developing this film, we have seen worrying developments in the anti-LGBTI climate in East Africa,” says director Wanuri Kahiu. “Local films and international TV shows have been banned because of LGBTI content. This has muffled conversations about LGBTI rights and narrowed the parameters of freedom of speech. My hope is that the film is viewed as an ode to love, whose course is never smooth, and as a message of love and support to the ones among us who are asked to choose between love and safety. May this film shout where voices have been silenced.”

“We are delighted to be able to screen Rafiki at DIFF,” says Zhou. “The film speaks to the issues of patriarchy that has led the film to be banned in its own country, and closes the festival with a programme packed with films dealing with a host of current challenges that those marginalised in our society, and especially women, are ‘loudly’ grappling with.”

Alongside the DIFF is the Durban FilmMart, a co-production market in partnership with Ethekwini Municipality’s Durban Film Office, Talents Durban, in cooperation with the Berlinale Talent Campus and the Wavescape Surf Film Festival.