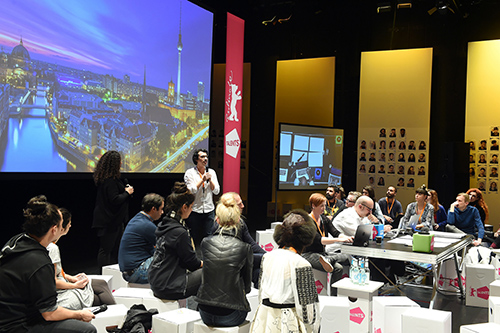 The Berlinale Talents team is proud to welcome 250 filmmakers from 81 countries in Berlin from 17 to 22 February 2018, including 128 women and 122 men. For six days they will have the opportunity to engage with one another, with experts and the public, to critically question their own artistic standpoint and to further develop their film projects.

A vast array of artistic and technical backgrounds

The selection for 2018 includes, amongst others, Angela Guerrero, the Mexican distributor of Raoul Peck’s I Am Not Your Negro (Panorama 2017), Chinese director Yang Qiu, whose short film A Gentle Night was awarded a Palme d’Or at the Festival de Cannes, and Ana Pfaff, the Spanish editor of Carla Simón’s Estiu 1993, which received the GWFF Best First Feature Award at the Berlinale in 2017. Turkish actress Elit Işcan, who played one of the five sisters in Deniz Gamze Ergüven’s multiple award-winning Mustang, will also come to Berlinale Talents. Many of the selected Talents raise questions about their own responsibility in the film industry, or are concerned with current political issues like gender equality. They include the Brazilian producer Marcella Jacques, whose films are about women in precarious conditions, or German director Leonie Krippendorff (Looping), who addresses gender aspects and the vulnerability of the body. Moreover, many participants personify the interdisciplinary character of Berlinale Talents, for example the Egyptian Talent Mohamad El-Hadidi, who works as a successful director, producer, cinematographer and photographer.

As varied as their backgrounds are, one thing unites all 250 participants: Berlinale Talents represents an important stepping stone in their careers. Afterwards, they can look forward to joining an illustrious alumni network that includes the producers Cait Pansegrouw and Elias Ribeiro, as well as director John Trengove who realised The Wound (Panorama Opening Film 2017): The film, which was further developed by director John Trengove at Berlinale Talents in 2014 and received production and distribution funding from the World Cinema Fund, is currently shortlisted for the 2018 Academy Award for Best Foreign Language Film. The active alumni community has grown to more than 5,400 former Talents, among them prominent figures such as Cristian Mungiu, Ana Lily Amirpour, Joachim Trier, Elisabeth Moss and David Lowery, whose most recent film, A Ghost Story, was released to wide critical acclaim. For Lowery, Berlinale Talents was a pivotal moment in his professional development: “Berlin is where I first kicked everything off. It was the first time I’d ever received any recognition for anything film-related, and as such it was a momentous jumpstart to my career.”

The selected Talents come from the following fields: directing (99), producing (52), acting (13), screenwriting (10), cinematography (17), editing (14), production design (11), sales and distribution (10), score composition (10) and sound design (6). 40 Talents will further develop their documentary, feature and short film projects in the mentor-guided Project Labs, and eight film critics will join the Talent Press to explore new paths in film journalism. Talents are generally in the fifth to tenth year of their careers and come with professional expertise and festival experience under their belts. In addition to looking at their artistic achievements, the local impact and relevance of their work’s content in their respective countries of origin are also part of the criteria that the international selection committees consider when making their decision.

You can find the selection here:
250 Talents / 40 film projects in the Project Labs
Please note: The complete Berlinale Talents programme will be published on 6 February.

Tickets to public events and film screenings can be purchased online starting 12 February on www.berlinale.de or at the festival box offices.