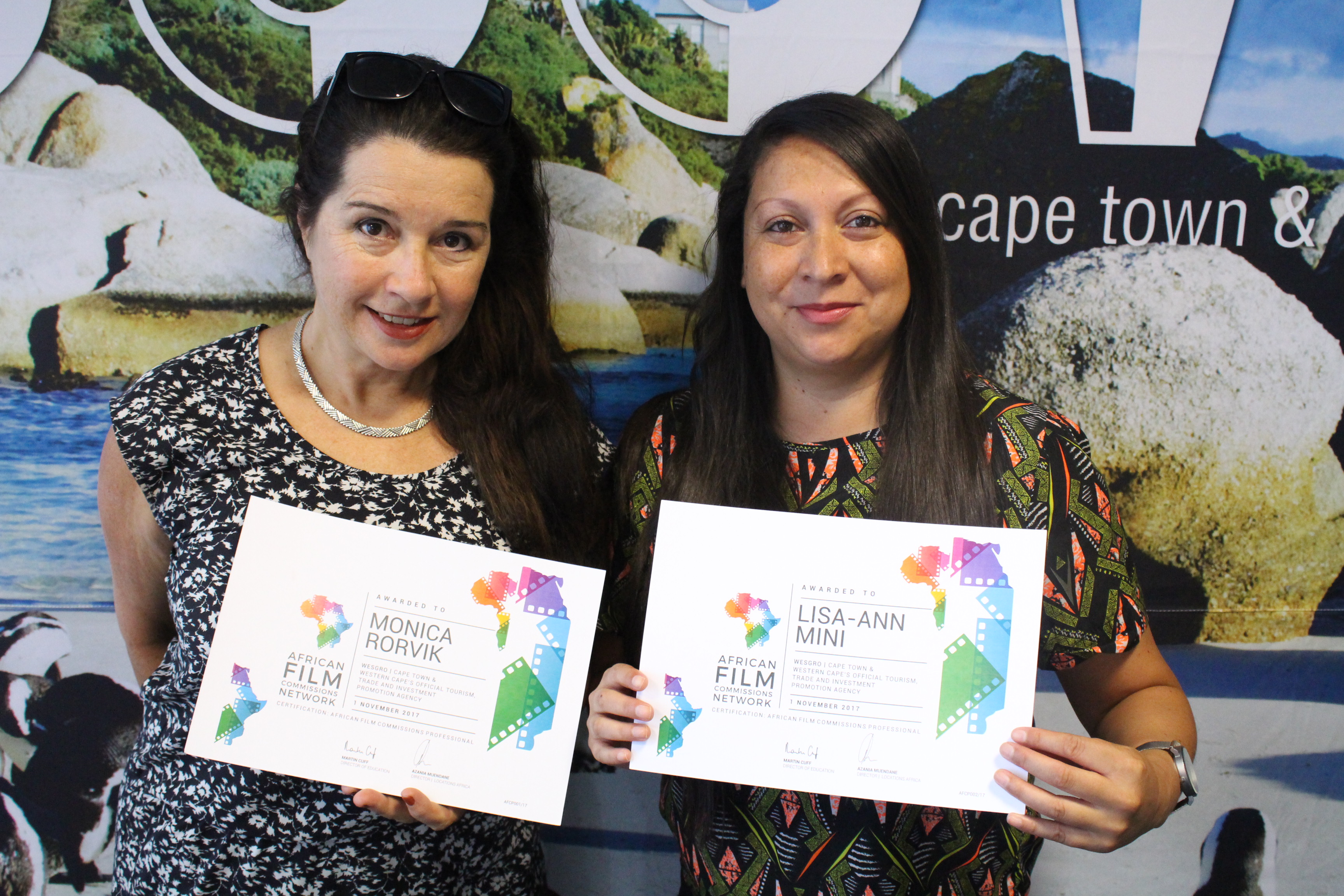 Cape Town and the Western Cape’s Official Tourism, Trade and Investment Promotion Agency announces that two employees in their Film and Media Promotion Unit – Monica Rorvik and Lisa Mini – have officially been certified as film commissioners. The Agency has also become a member of the Africa Film Commissions Network (AFCNet).

Wesgro is mandated to promote Cape Town and the Western Cape for film and media production. The team has been incredibly successful to date, helping land R1, 56 billion in production value in the province in the last financial year (2015/2016). This will result in 3 271 full-time equivalent jobs being created.

AFCNet grew from Pan-African locations research supported by the South African Department of Arts and Culture. At markets globally, film commissions from around the world have the opportunity to come together to form panels, or even market themselves together to highlight funding offerings, locations and the film work opportunities from their respective continents.

The AFCNet initiative provides a voice for Africa, and with Wesgro now part of this initiative, Cape Town and the Western Cape will also be better positioned as a key film and media production destination.

Tim Harris, CEO of Wesgro, said: “With two Film Commissioners employed at Wesgro, the Agency has demonstrated its commitment to marketing and growing the film and media industry in Cape Town and the Western Cape. Film and media is a relationship industry and our filmmakers are often expanding their work into the rest of Africa. For example, Madmax: Fury Road was shot in various countries including Namibia and had its studio work done at the Cape Town Film Studios. By being able to better link these opportunities through the network, I am confident our new film commissioners will attract even more productions to the Western Cape.”

Monica Rorvik, one of Wesgro’s new film commissioners, and head of the Film and Media Promotion Unit added: “Marketing the continent with other commissioners in international markets will help expand Pan African awareness, positioning the Cape as a gateway to the rest of Africa. The goal is to help drive projects to our region and helping our own filmmakers in expanding their Pan African network.”

“Wesgro looks forward to working with other commissioners across the African continent, as we seek to grow our respective economies and create jobs,” concluded Harris.

Wesgro and the City of Cape Town announced a new research project to determine the size and structure of the film and media industry in the Cape.

Grant Thornton, the financial services company, will be leading a consortium to conduct the value chain baseline study on the film and media industry in Cape Town and the Western Cape.

This baseline research will coincide with the recently announced South African Film Industry (SAFI) economic baseline research commissioned by the National Film and Video Foundation (NFVF). Urban Econ will be conducting the NFVF’s research and, together with Grant Thornton, has been mandated to find ways to assess the national and provincial baselines in an aligned manner.

In a recent joint meeting, each strategised about avoiding interview fatigue by aligning the research teams’ contact lists in order to allow more companies to be interviewed. This strategy will add to the robustness of the baseline.

Wesgro CEO Tim Harris stated, “This research will provide the industry much-needed clarity about its size, and identify niches that need to be promoted, or intervention needed to drive growth.’

City of Cape Town Trade and Investment director Lance Greyling said, “The study is also strategically relevant and will inform the City of Cape Town Film policy which we hope will help drive the growth and transformation of the sector.’

NFVF CEO, Ms Zama Mkosi, believes that the research will help create an understanding of the business of film in South Africa and prove the industry as a lucrative contributor to the GDP and hopefully attract more investors. “The NFVF aims to give a true reflection of the film and audio visual industry through the Economic Impact of the South African Film Industry Research, and to ensure strategies and programmes that are responsive and effective as well as to identify audience trends with a specific focus on local content.’

The NFVF looks forward to seeing the sector’s comments and proposals once the research is concluded, and calls on all film and media stakeholders to join the study and support these research projects.