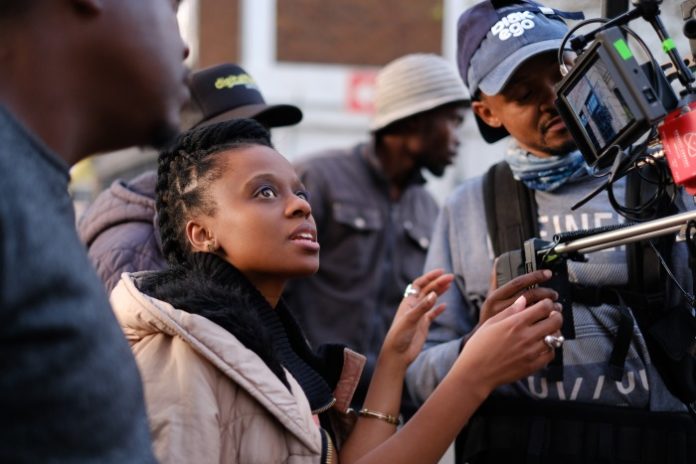 Tell us a bit about your background and how it has shaped you as a director?

I grew up as an only child, living with my grandparents. A lot of the time it was just the three of us, so I had to entertain myself. I think that pushed me to be a very imaginative child and explore myself creatively through art and craft, painting and drawing. I would call that the start of my storytelling journey.

As the creator and director of Showmax’s latest Original, Woke in Progress, can you tell us what inspired you to create this series?

I wanted to tell a story about two friends who are exploring the city together, inspired by my own experiences exploring Cape Town with a friend. I just thought of it in a different context: Maboneng in Johannesburg.

The series is set in the uber-trendy Maboneng. What informed this choice and what has it been like shooting in the area?

It’s this really colourful place where young people are together, being free and exploring themselves creatively. It’s chaotic filming in public, in the street, and trying to control the environment.

There have been a lot of spontaneous, unexpected moments with members of the public – but Maboneng has been very friendly and accommodating to us. We’ve had a very good time shooting there; it’s been fun.

Showmax have been a pleasure to work with. They have really pushed me and Emma [de Wet] as writers to be as creative as possible, to think outside the box, to think new and to think big. Working with Candice [Fangueiro], Shaamila [Fataar] and the team has been great. We’ve had such great chemistry as an all-female team.

It’s also been inspiring to work with their massive marketing team, which is also female-led. It’s been such a new, positive experience that’s been so encouraging and has got the best out of us.

Your previous works include the award-winning short film Mma Moeketsi and TV drama series Lockdown to name a few, but you have said that comedy is your first love. What do you love most about comedy?

I love comedy because it’s part of my childhood; that’s what I grew up watching. I watched a lot of television, especially animation, and it was always fun for me to be able to laugh and be entertained by all the ridiculous things animation is able to do, in slapstick ways but also in these magical realism ways.

I also liked watching comedy, especially characters like Steve Urkel and The Fresh Prince of Bel-Air, and South African comedies like Sgudi ‘Snaysi and Suburban Bliss. There have been so many comedies that have shaped the South African landscape of entertainment and television and inspired me as a creative. I also like satire a lot; I like being able to make social commentary in funny ways.

Showmax and Netflix are investing a lot more in local content, why do you think that is?

A lot more South Africans have access to television than there are film and cinema goers, so it makes sense to invest in local content for the small screen because that is where a lot of South African consumers are. And it’s obvious that South Africa consumes local when it comes to television, so it would be a mistake for Showmax and Netflix not to recognise that.

In your opinion, what value do these digital platforms hold for emerging filmmakers and how can they best utilise these avenues?

The digital platforms are as emerging as the content creators are; they are newer than traditional television. To work with SABC and e.tv, you have to understand the system, which is very strict, with a lot of red tape in terms of how to become a vendor and make content there. Whereas with Showmax, there’s more fluidity and less red tape.

What in your opinion is the key to creating a successful television show in South Africa?

This is my first time as a creator and showrunner seeing the project all the way through from conception to post. I’m learning as I go, so I’ll only be able to say what the key is in retrospect.

One key I can say right now is people management. You need to be able to carry the vision through to the end, with flexibility at times, because you write something on the page and it’s not always what you see on the day, so you need to be flexible and work with what you have so you still have something successful when you’re done.

What next for Rea Moeti?

I’m making a feature film, so look out for that.

I’ll find out in 2020 when I have more time off-set. I’ve been on set back-to-back for so long, and when I’m not on set I’ve been writing, trying to finish my feature film. For the past four years, I have been working myself to the bone and trying to take all the opportunities ahead of me; I’m really not giving myself as much time to rest as I’d like to, or to be as social as I used to be.