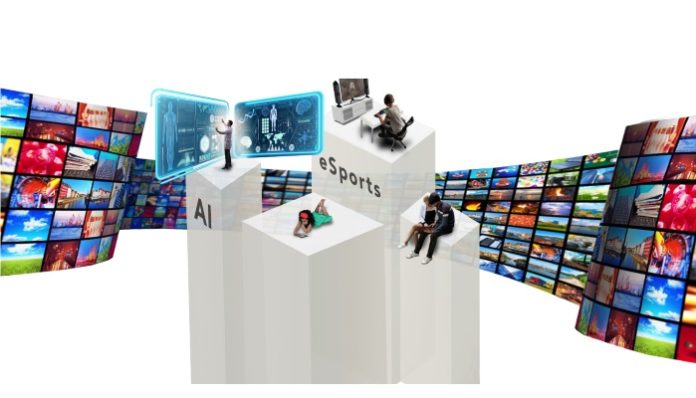 2019 has been a year of technology firsts in the media and entertainment industry. Multi-platform content saw a meteoric rise, Artificial Intelligence (AI) gained ground across many fronts and connectivity, devices and personalisation changed market dynamics significantly.

We have seen the development of new formats, transmission networks and content management systems, and there is no doubt that 5G technology will have a profound impact on the industry as a whole when it is fully rolled out. This year has truly been a year of change and adaption, and some areas may be bigger than we think…

One of the star trends this year has been Artificial Intelligence technology. Everyday it is becoming more and more necessary to have tools that allow us not only to automate tasks in order to gain efficiency and speed, but that also allow us to rely on ‘intelligent automation’ for our daily tasks and workflows. Analytics Company, IDC Research, has already forecast an investment of 77.6 billion dollars in cognitive AI systems within the media and entertainment world for the year 2022.

Devoncroft’s Big Broadcast Survey for 2019 presented some initial data on investment trends in broadcast technology, where AI and machine learning already occupy the seventh place in the list of trends considered most important by professionals of the broadcast industry. There is still a long way to go, both in the evolution of these tools and their implementation. Artificial Intelligence offers very interesting advantages, such as automatic cataloguing of metadata, advanced searches of content adapted to the specific needs of users, facial recognition, object detection, audio effects detection or speech-to-text, analysis of the sentiment of images or even performing the transcription and automatic translation of texts.

The move to IP

One of the big technology drivers this year has been the adoption of new connectivity. IP technology and connectivity derived from the development of new video formats and this form of content transmission not only allows post-production houses and broadcasters to work with higher-quality formats but also allows immediate content delivery and more importantly, remote production. It’s probably one of the most disruptive changes in broadcast history, not only because of the technical challenges, but also in adapting to the way the industry works. Therefore, despite all the advantages it presents, its adoption rates are still quite low.

Since its inception back in the 1990s, eSports were virtually unheard of and battled to get any mainstream coverage. This year, the situation has changed big time. These tournaments have become increasingly popular, hundreds of millions in prizes and more ‘traditional’ sport structures have made eSports more attractive to broadcasters, and therefore this form of entertainment is attracting money, sponsors and new audiences at an incredible rate.

As more people are consuming eSports content, the hours spent watching eSports videos are also increasing every year. In 2012, people were spending only about 1.3 billion hours watching these videos. Now, in 2019, the increase has been drastic, as the number of viewers has grown to 380 million, who watched 6.6 billion hours of eSports videos worldwide. It’s caught the attention of the broadcast sector who are investing in its future.

Despite the rumours of its supposed irrelevancy, traditional TV is alive and thriving and predicted to keep growing. It’s a completely brand-safe environment, offering reach, high-quality execution, measurability and storytelling opportunities, but we have entered a new generation for TV.

As online video has matured, creating a cross-screen video experience has become a key focus for broadcasters – and 2019 has seen a meteoric rise in the media and entertainment industry for multi-platform content. There has been a marked increase in the demand for multi-platform content producers in the worldwide job market, and technology providers such as Avid, Adobe and Blackmagic Design, for example, have all updated their software with enhanced AI based multi-platform export features within their editing platforms.

The distinctions between print and digital, video games and sports, wireless and fixed internet access, pay-TV and OTT, social and traditional media are all blurring. Streaming services, TV companies and social networks are now competing over both conventional sports and eSports rights. We are also seeing TV broadcasters, telecoms, tech companies, OTT operators and film studios all competing to provide TV content. Radio stations, podcast companies and streaming services are all competing to provide radio and podcast content.

There’s no surprise, therefore, that 2019 saw a ton of merger and acquisitions making the headlines. AT&T and Time Warner merged, and the acquisition of 21st Century Fox by Disney that took place in March are only two such examples. It’s hard to believe that just a few years ago, streaming was the supplement to traditional broadcast television and pay-TV. There were issues with quality of service, quality of experience and the belief that any major event – like the World Cup or even concerts streamed live — would ‘break’ the internet. Netflix proved everybody wrong, becoming the world’s largest global TV channel in 2019 and their success has spurred many others to join the streaming party. Over the next few years, experts are predicting data traffic levels will grow to over 397.8 trillion megabytes in 2022.

5G technology is being developed at a furious pace and the roll-out of 5G wireless networks is inevitably going to change the way media is both broadcast and received. 5G was well represented at both NAB and IBC, offering insights as to how the technology will influence the future of broadcasting.

Something that I am following with much interest is a Chinese 5G technology-driven project, which was unveiled at the 2019 Qingdao International Film and Television Expo back in August. Government officials and industry insiders recognise that the ground-breaking nature of 5G technology could potentially give a fresh injection to the broadcasting and TV sectors in China and are willing to throw millions into its development. The establishment of a 5G High-and New-Tech Video Pilot Park in Qingdao will see the roll-out of the first batch of high- and new-tech video products as soon as the end of this year, by adopting state-of-the-art technologies such as virtual reality, augmented reality, mixed reality, 4K/8K Ultra High Definition, high frame rate and wide colour – all of them in 5G. It’s a sign of what’s to come, adding a new impetus to the world of broadcast, media and entertainment beyond 2019.