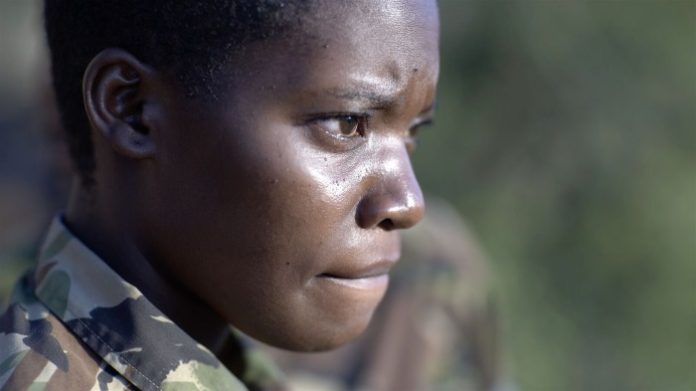 The Black Mambas are an all-female anti-poaching unit first founded in 2013 by Transfrontier Africa NPC. Originally formed to protect the Olifants West Region of Balule Nature Reserve, the group’s operations were quickly expanded and they now police 52,000 hectares of the Greater Kruger National Park, striving to make their area of influence “the most undesirable, most difficult and least profitable place to poach any species.”

In a new film entitled The Black Mambas, director Bruce Donnelly and his team shine a light on the efforts of these women, whose impact extends far beyond nature conservancy and into many forms of community upliftment. Screen Africa chatted to Donnelly about how the film project came about, the production process and the enthusiastic reception it has received so far.

Donnelly hails from Durban and studied film and media at the University of Cape Town, before spending a year at the New York Film Academy, which he describes as a “very practical, hands-on one-year programme” that “complemented my studies in South Africa very well.”

After opening a production company, DKR films, during his first year in New York, Donnelly explains that “over the years, I’ve been looking for a way to reconnect with South Africa, and connect the storytelling and the documentary work that I do to bridge the gap for myself. I kept thinking, What are the kinds of stories I want to share? What are the stories that I don’t see being told? Generally speaking, people’s understanding of Africa often tends to be limited, or else it sways negative – and so that became my motivation for wanting to tell stories from South Africa.”

In terms of his own career path, Donnelly says that he “stumbled into documentary filmmaking” but found soon found that he “loved the process. It was very freeing, after working for so long trying to put a scripted feature together – and what I loved from a filmmaker’s point of view is the unique way that you can get audiences to connect to subjects. You can get them to connect as people they can relate to – and, in that moment, politics and prejudice can fall away.”

As Donnelly puts it, this project came up at the perfect time: “While I was looking into the idea of telling under-represented stories from Africa, I learned about the Black Mambas. It’s a positive, proactive story that represents a new generation, a different way of thinking – not just looking at the problem, but taking steps to solve and address it.”

The film was co-produced by DKR Films and Brazilian company Adorni Films – a relationship that goes back to Donnelly’s time at the New York Film Academy. Donnelly explains that he undertook the initial research with a South African friend of his, and the shooting of the documentary took place over two production sessions.

“For the first sessions, we brought in all the crew and did a lot of glamorous shots – drones flying over the bush, and things like that.

“However, at the end of that particular shoot, I realised I wanted to come back and strip down the production the second time around. This was because, as much as the women were comfortable with and we all got along well, as a filmmaker I don’t like big productions – especially, in the context of the documentary genre, when it comes creating a sense of intimacy and trust. So my idea was to go back and – having established a good relationship with everyone there – I just wanted to go out on my own and shadow the group for as long as I could.”

Donnelly delves into why this approach paid off for the project: “Those two production sessions complemented each other really well. The second time around I felt like I could disappear – at least, as much as possible. The scenes where I’m walking along the fence with the group, for example, that’s really just me and a couple of the Mambas.”

Although Donnelly estimates that “about 70 to 80 percent of the film” was shot on Sony A7 ii cameras, with DJI drone footage providing sweeping aerial shots of the vast game reserve, for these intimate moments he used “a DJI Osmo – I just strapped myself up and used that. It was the most practical item I could get my hands on at the time. It operates on a three-axis gimbal, shoots in 4K and you operate it via an app on your phone. If the lighting is good, you can get beautiful material – I trusted it with what we were doing and it allowed me to be a one-man band.”

Donnelly is also quick to point out the off-screen benefits of his second, solo production session: “It also gave me such a different experience and appreciation of the work that the Mambas do. That particular day [walking by the fence], we trekked for seven hours, and it was the most exhausting thing I’ve ever done. And it gave me such a deep appreciation – this sense that these women do this every day, in extreme conditions, and they are on the inside of the fence, meaning they’re exposed to all wildlife of that area of the Kruger National Park.

“Not only does this experience show in the film, but it’s something I can carry with me and talk about – because I know the work that they do really has value, and they put so much into it.”

The Black Mambas premiered at the American Documentary Film Festival in California – where it won the Best International Short Film award – before following this up with several more high-profile screenings around the world and two more prizes (at the Jozi Film Festival and the Wellington Independent Film Festival in New Zealand).

With South African company Hi-Tec coming on board as a “very supportive outreach sponsor”, Donnelly says: “The reception has been amazing. We started our festival run at the American Documentary Film Festival – which was a wonderful, auspicious start for us – and from there, it just picked up. It’s been translated into German, Japanese, French, Portuguese, Spanish – which shows the film is finding an audience everywhere.”

Asked to reflect on why this story has made such an impact, Donnelly says: “Though it’s a short film, it touches on education – through the Bush Babies programme, which features in the film – community engagement, upliftment, women and empowerment; there are so many things for people to connect to in the story.

“Most people are aware of the issue of rhino poaching,” he continues, “but they tend to hear it from one side. They get the same terrible news all the time. Our purpose with this film is not to gloss over anything, but to show the resilient, problem-solving side of things. If you want to put your energy into something, put it here – believe in these women – and this is a message that is carrying around the world.”

Donnelly explains that he is excited that film has started to make inroads at environmental film festivals, and he outlines his ultimate vision for the impact of the film: “I obviously have a good relationship with the Black Mambas and Transfrontier Africa now – and my simple objective is, How can this film can be of continued service to you? How can it be a tool for you? How do we actively engage audiences through conferences, events and screenings? Distribution has changed – the model is different now – we want to take the film on tour, take it into schools and universities and actually have some of the Mambas travel with it to engage directly with audiences.

“Ideally, we want to create a programme around the film and the work of this amazing group. I want to take the film to China – there is an organisation there called Wild Aid that shows films that deal with issues concerning conversation. As poaching has become synonymous with the Chinese market, it feels important to show our film there. Then we will have our story right in the heart of where it needs to be,” he concludes.