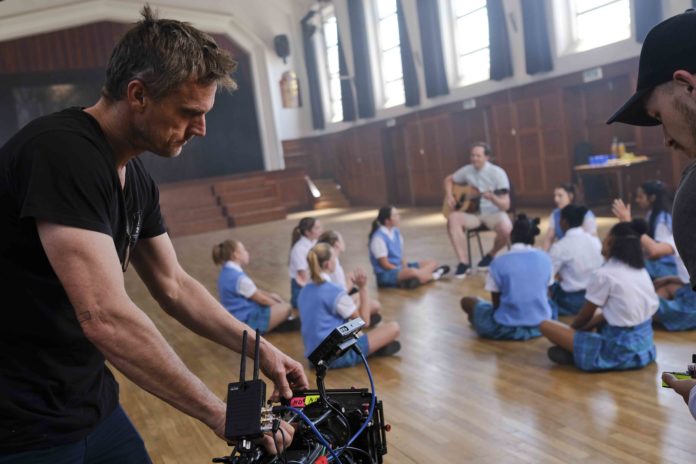 Marc Rowlston is enjoying a good start to 2019. Not only did his contribution, as cinematographer, to the record-breaking Showmax Original The Girl From St. Agnes see him name-checked by co-director Cindy Lee as “the discovery of the series”, but in February he was also honoured with a SAFTA nomination for his work on the popular SABC drama series Emoyeni.

Screen Africa chatted to Marc about his approach to shooting The Girl From St. Agnes, how to work around tight budgets and the fundamental importance of storytelling to the cinematographer’s craft.

Give us a sense of your background as a cinematographer.

I’ve been shooting since 2000. I wouldn’t say I’ve been a DP for that long, but I’ve been shooting a lot in the corporate environment – anything you can get your hands on, you know? I did a lot of magazine shows for TV, kept working and pushing – the hardest thing is to get a reel together. My first job in the industry was actually as an extra in 1986, I was a soldier in a war movie. I was really young at the time, but my brother was in the industry and he kept me connected to it while I was at art school. I played in a band and I tried to be an artist for a while, but I found it too lonely – and then I gripped for about five years, including some big productions like Gavin Hood’s A Reasonable Man. But along the way I got the chance to operate a little bit, like third camera – and I knew that’s where I really wanted to be involved. So I did a few more years of apprenticeship – doing loading and things like that – and then I was ready to start shooting, and some opportunities came up.

How did you get involved in the production of The Girl From St. Agnes?

That was definitely down to Catherine [Cooke, co-director of the show]. I’ve worked with her before, and I’d heard her speaking about the show and it sounded like a very exciting project – and when the time came, she pushed for me. I went for an interview and I got it. Catherine and I have done months of work together in the past, directing and shooting on telenovelas, we did a lot of scenes together and I love the way she works – it’s smart, and it’s fast.

Initially, what excited you about the project?

The idea of doing something for Showmax was exciting – and then when I received the scripts, I read them from start to finish, as quickly as I could. That’s also the nature of the show, obviously, the ‘whodunit’ aspect was very appealing. In fact, the references Catherine gave me excited me the most – it was things like Jean-Marc Vallée, who did Sharp Objects, directors who work a lot with natural light. That was the sensibility. No flags, nothing major set up – just using some practicals and getting a naturalist look that can still be well-photographed and pleasing to the eye. That sensibility really excited me, because you can get stuck in the groove of over-lighting things like faces – and shots can start to look very samey.

That is definitely one of the most visually striking elements of the show: the extensive use of low-light photography, and your willingness to let images stay quite dark on screen.

I think there is something about the very natural look that adds to the viewer’s experience. The world feels more authentic. It wasn’t about striving for the perfectly lit shot, but rather telling the story in the right way.

And I’m sure the time-saving aspect of this shooting approach was essential for a long-form project like The Girl From St. Agnes, which runs for a total of about eight hours?

Definitely. We had a good production schedule, as far as these things go, but we were still left to shoot about eight or nine pages a day. So this style that we decided on made a lot more sense in terms of the time we had and what we needed to focus on. It was also really fortunate that the style resonated with the themes and the tone of the show – it was a liberating experience, being able to shoot somewhat ‘on the fly’ but with a lot of confidence in what we were doing. And it led to a lot of exciting creative moments on set – asking ourselves, “How can we do all this in one shot? – and finding some stylish solutions.

Another noticeable element is how many of the images on screen seem suffused with cool, brooding colours – blues, teals and turquoises. Were you involved at all in the grading of the footage?

I sat in the grade for one day with Craig Simonetti, who was amazing to work with – and the first version we came out with was actually even darker, and much bluer. It got scaled back a bit in the end, but the art department was so consistent with their use of those cool colours in the design of the show, I don’t think anything’s been lost.

The movement of the camera is also very interesting. Rather than static ‘set-pieces’, there’s an ‘open world’ quality to the action…

This was the first thing I worked on where we hardly ever used marks. It was strange for me, coming from multi-cam shoots where hitting marks was so important – but here, it was on the shoulder, so I would just tell the performers to move around but stay this side or that side of me, and trust that I’d find them. I think the approach helped a lot of the performers – some of whom don’t have a ‘technical’ background – and we (including Catharine and Cindy) wanted that freedom for them. One of the actresses, Tessa Jubber, watched the show and she said, “It felt you were there with every breath of every character” – and that’s what we wanted, we even wanted the camera to feel like a living, breathing presence in every shot.

What was the experience of working with more than one director on the project like?

I’m used to it – but it was even easier this time round. Both Catherine and Cindy were 100% committed to the project, and they came to it from slightly different places. You’ve got to get used to people, the way they work, but we slotted right in and learned to trust each other very quickly. I tried to keep the vision of how we saw things – how we’d spoken about things – in tact, and we had one consistent lighting style, so it all came together. It’s beautiful when it unfolds like that; it’s what I live for – creative collaboration.

Finally, after its successful opening in South Africa, what are your hopes for The Girl From St. Agnes?

I hope it gets me another job! Seriously though, I hope it earns that international distribution deal, and just contributes to improving circumstances in the industry so it becomes a real option to make great television shows here. We need more of our local stories on international screens. We have a voice and we have the talent – I think we’ve matured as an industry in recent years and as storytellers – and all we need now, really, is the backing.