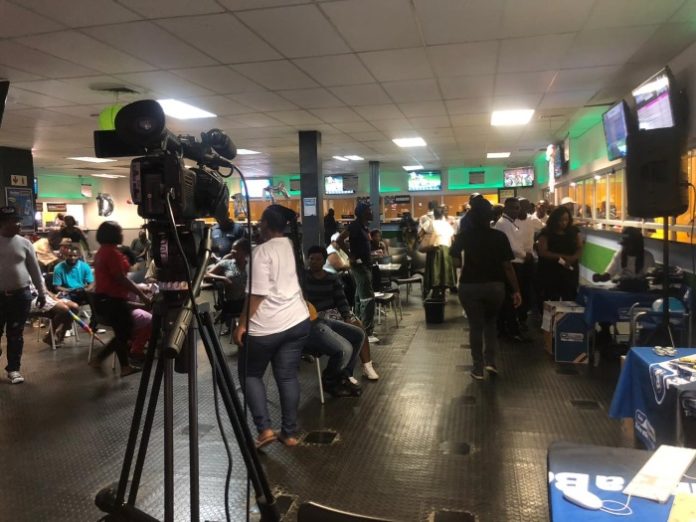 In the words of Wesley Lloyd – outside broadcast production manager at Tellytrack – the company wanted to “do something special” to commemorate its Win A Dream campaign, a nationwide initiative that capped off a successful 2018 for the sports betting giant.

“Win A Dream was one of last year’s biggest marketing campaigns – it ran over six weeks – and our goal was to have remote broadcasts from betting centres all over the country for every single day of the promotion. From Port Elizabeth to Cape Town, KZN and Thohoyandou in Limpopo – we wanted to get out there and broadcast stories from every corner of South Africa.”

Lloyd explains that: “In the past we’ve done satellite uplinks, but – once we started to factor in the cost of renting SNGs and MPUs for the duration of the campaign – we realised we’d be looking at a multi-million rand production budget.”

This is when Tellytrack called in the services of Telemedia, who – as Lloyd puts it – “have been great partners to us for many, many years. Our first move out of MultiChoice was to [Telemedia’s] facilities, and we’ve just grown and grown since then. We started off with one channel – we’ve now got six – and they’ve provided all the technical support along the way. We’ve got OBs and race courses all around the country, and Telemedia provides all the connectivity infrastructure for us.”

“When we travel to IBC,” Lloyd continues, “we usually spend a couple of days there with Telemedia and our other suppliers, and they introduced us to a bonded 3G broadcasting system called LiveU. Andy Louis [Director at Telemedia] demoed it for us, and – although I’ve been a bit hesitant about the technology in the past – it fit the bill for what we were looking for perfectly. So I told Andy that we have one problematic site out in Midrand, where our cellular comms are always a bit iffy – and if the unit worked out there, we’d go for it.”

After the LiveU system aced this initial test, Lloyd explains: “From there, we literally sent a cameraman out into the field with a backpack, some batteries, a LiveU unit and a camera. We did a whole live content production with this equipment, where in the past, we’ve brought in an MPU with three or four cameras, microphones, uplink – compare that to one cameraman, one presenter, one microphone, one LiveU unit. The difference is incredible, and it was as effective as a multi-camera production.”

Moreover, despite concerns about connectivity in some of the more far-flung areas visited by the campaign, Lloyd reports that: “Every single day it worked, without fail. And it worked beautifully: the picture quality was amazing, the data usage was minimal – it was a very successful first run.”

Quentin Barkhuizen, National Sales Manager at Telemedia, comments that: “The LiveU brand is the most widely-accepted in the industry at the moment. While Live Bonded Cellular Video Transmission technology is still quite new in South Africa, it’s been used extensively in the news industry in other parts of the world – especially for rapid deployment and ENG situations, because of the ease of use and the cost-saving involved.”

Both Barkhuizen and Lloyd estimate that an effective LiveU set up can be achieved at a cost of about “ten times less than that of a traditional SNG rig.”

For those enticed by what this kind of accessible broadcasting technology could offer their own content production strategies, Barkhuizen explains that: “Telemedia offers two versions of the solution: one is that we can supply the mobile units and the receivers – and then the company who rents them can handle the entire production themselves. Alternatively – what often happens with customers outside of South Africa, for example – is that they come in with a portable unit and then we have a receiver in our MCR. Because we’re a registered ISP, we have an excellent internet connection – and so we could provide connectivity to customers on our internal network through the LiveU system, should it be required.”

Lloyd concludes by outlining some future plans that Tellytrack has for the LiveU system. “The Win A Dream campaign was a first test for us. We’re now in the midst of the Cape Season, so we’ve got another two-week campaign coming up for The Met and we’re going to use it again – but this time, on an even bigger scale. We’re going to bring in three LiveU units from Telemedia, and we’re going to have a crew in Limpopo, one in Joburg, one in Cape Town, and we’re going to go for an interactive broadcast between the three centres in a live scenario. I think this is really going to show the versatility of the LiveU unit, and – again – it’s a massive cost-saving exercise for us.”