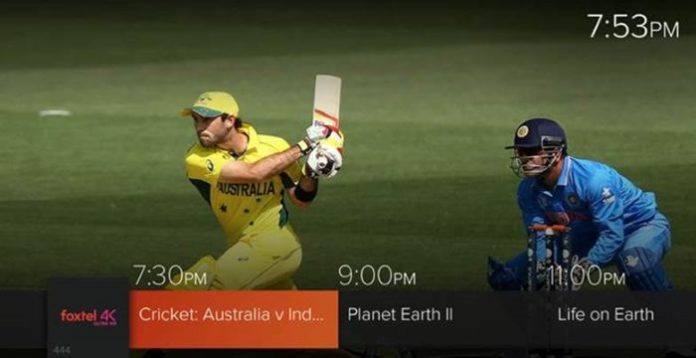 Telstra’s head of Telstra Broadcast Services, Trevor Boal, said: “we have pioneered this new approach with FOX SPORTS to ensure Australians can get a superior entertainment experience. We’re excited to see where our 4K capability will take the future of broadcast and look forward to providing our comprehensive suite of broadcast services to customers around the world.”

FOX SPORTS’ director of Technology & Infrastructure, Stephen Edwards, said the delivery of Australian sports in 4K is an historic step in Australian broadcasting, the FOX SPORTS production and technical teams have set an unparalleled quality benchmark for our 4K outside broadcast productions and the Telstra 4K delivery solution is a vital part of ensuring this quality is maintained when delivering live feeds back to FOX SPORTS and onto our customers watching on Foxtel 4K (channel 444).

Live broadcast of the cricket season is just one element of 4K for Telstra Broadcast Services. In partnership with WTA Media Telstra recently provided an integrated broadcast system to allow the Women’s Tennis Association Singapore finals to be transmitted in 4K – its first time ever.

Telstra’s 4K capability has been available to international partners and customers across Telstra’s GMN since its launch in 2016 – a worldwide highly resilient network built on a four fibre path system. The service is specifically designed for the seamless delivery of video content and is monitored 24×7 to guarantee the highest levels of service and minimise any interruptions.