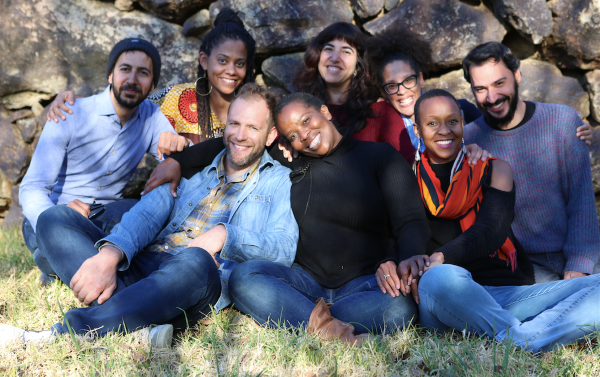 After six weeks in residency at The Nirox Foundation in The Cradle of Humankind, the 2018 Realness residents headed to the Durban International Film Festival (DIFF) to present their projects at Story Junction and take one to one meetings during Durban FilmMart (DFM) with the visiting film professionals. “The Durban FilmMart provided an exciting opportunity for our residents to meet with funders, sales agents and other possible partners for their projects,” said Realness co-founder Cait Pansegrouw. “They were also able to take part in a public pitching session hosted by Talents Durban, attend networking events and watch African films.”

Inke Van Looke, manager of CineMart and Rotterdam Lab, was impressed with the quality of the residents and their projects: “The passion for storytelling and the clearly defined vision of the Realness residents truly resonated. I enjoyed the open and frank conversations, which enticed a deeper dive into their stories and ambitions as a writer/filmmaker. You can notice that the standard is set high by both the residents and consultants, making you excited for more talent to come from the programme!”

Project manager of Sørfond (Norwegian South Film Fund), Per Eirik Gilsvik added; “Realness presented a strong selection this year with a great variety and balance in topics, form and genre. Each of the selected projects caught my interest, not only due to the general quality of the projects but also due to all director’s ability to pitch the projects in a well prepared and engaging manner.”

The residents will have a further six weeks to consolidate their work from home, under the mentorship of story consultants Selina Ukwuoma and Mmabatho Kau who will continue to consult via Skype. Their final deliveries will then be considered for scholarships to the EAVE Producer’s Workshop, TorinoFilmLab Meeting Event and La Fabrique Cinema De L’Institut Francais. Scholarships to Locarno Filmmakers Academy and TIFF Talent Lab were awarded to Kenyan participant Ng’endo Mukii.

The 2018 edition saw the first moves towards creating a South-South alliance between Africa and Brazil being taken, and which The Realness team plans to expand upon over time and is actively seeking partnerships in order to do so.

“A big part of my role as a market director at the Cape Town International Film Market and Festival is to foster a space for more Global-South collaborations to emerge, it was a priority for me to test the waters on co-development between Latin America and Africa through our development lab. We are grateful to the Robert Bosch Foundation for making this possible in 2018 with their generous contribution to our initiative,” explains co-founder Elias Ribeiro.

Daniel Ribeiro is a director from Sao Paulo who saw Realness as an opportunity to work on the shooting draft of his second feature film, Caio & Amanda. Ribeiro joined the five African talents for one week in residence and then continued to work remotely from home back in Brazil.

“Being from Brazil, participating in Realness and sharing the experience with participants from African countries was really exciting because there’s so much in common between us. When we talked and discussed our projects and stories, it was clear that Brazil shares not only a common past and cultural influence from African countries, but still a common present. Exchanging experiences and getting feedback was extremely positive,” he said.

Head of Cultural Affairs and Public Diplomacy for the Embassy of Brazil in Pretoria, Rafael Leal visited Nirox in June in order to meet the residents and to discuss synergies moving forward.

Leal commented: “The Brazilian Embassy in South Africa considers the Realness initiative a great opportunity for enhancing Brazil-South Africa cultural ties. The rich diverseness of both countries and the exchange promoted by Realness can help to realise the potential of artists and help them see their reality through a different perspective. I look forward to see more Brazilians joining the project.”